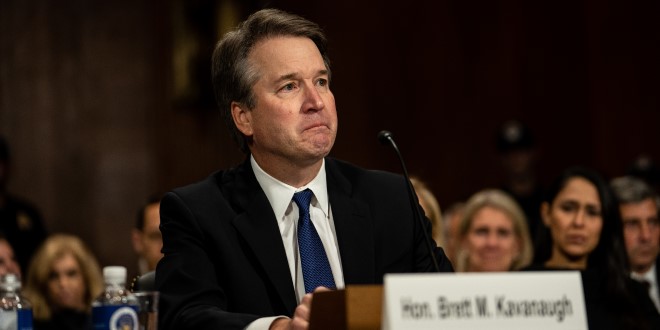 The Devil’s Triangle: The Woman Lost in the Wake of Trump and Kavanaugh

A couple of days ago Trump said it was a difficult time for young guys in America and went on later to mock Christine Blasey Ford’s testimony.

No. It’s a difficult time for sex. Instead of the fun, occasionally silly, often breathtaking adventure playground of experimentation and understanding it should be, it’s currently a battlefield, and a weapon used by those in power against those without. Good sex should be a dialogue, but it seems that any modern conversation about sex inevitably becomes a raucous back-and-forth about politics and gender identities and the complexity and contradictions of sexuality itself.

Despite the toxicity of sexual discussion right now, I’m optimistic. I personally see positives in it: to me it represents the final resistance of traditionally dogmatic sexual attitudes, lashing out in a last ditch effort to preserve themselves as they struggle to confront the realities of a fast-changing sexual landscape. Old sex is cornered, and that’s where its adherents are most dangerous. It’s a transitional period, and those of us on the side of progress need to grab on tight and weather the storm we’ve created, or accelerate its power to hasten its end. Either way, batten down the hatches.

But we’re not there yet, not by a long way, and in many powerful quarters, the thought of someone who self-identifies as a woman having sex for fun – her own fun, I should stress – is taken as threatening.

But threatening to what, exactly? There’s one particularly ugly and pernicious example, largely overlooked, happening right now, oozing out of the sides of the Kavanaugh sexual assault inquiry like too much sauce from a hot sandwich to burn your fingers.

It concerns not the primary character in the story, Christine Blasey Ford, or her heartbreaking testimony, nor the mercurial Kavanaugh himself. Instead, it concerns a woman who was unwittingly caught up in the fallout of this horrorshow. I’m not going to name her here because she was thrust into popular consciousness largely against her will, although her name has been widely and openly reported in the press already – she was one of the woman who signed Kavanaugh’s letter defending his character. You could find it easily if you were so inclined.

The woman in question appears 14 times in Kavanaugh’s yearbook, with an insinuation that there had been some kind of sexual interaction between her and a number of the male seniors in Kavanaugh’s year – Kavanaugh included. The language that appears in the yearbook in reference to her seems to imply that the men involved considered her as nothing more than a kind of graduation ceremony, dehumanising her to a right of passage and, moreover, all the men knew it and discussed it. It’s not hard to imagine them high-fiving and backslapping as they exchanged their hugely exaggerated stories. One of the clubs Kavanaugh lists in his yearbook is the ‘Devil’s Triangle,’ which he brushed off as a drinking game, but is actually a reference to two men having sex with a woman and high-fiving over her back. But then, is it really news that a rich white kid in an Ivy League school called Brett is a douche?

She has denied sexual contact with the men outright, and stepped away entirely from public commentary.

“I learned about these yearbook pages only a few days ago,” she said in a statement to The New York Times. “I can’t begin to comprehend what goes through the minds of 17-year-old boys who write such things, but the insinuation is horrible, hurtful and simply untrue. I pray their daughters are never treated this way. I will have no further comment.”

But the insinuation stands, and I recognise that even by raising it I risk reinforcing that insinuation. The issue here, though, is not so much whether the claims are true or not (they’re not, at least not in the black-and-white, where-there’s-smoke-there’s-fire form in which they were initially reported), but in the culture that influences contemporary attitudes to female sexuality. The Kavanaugh case is a frustrating but useful prism through which to examine them.

Imagine how wounding it would be to find out through the mainstream press, thirty-plus years after the events, that a group of men you once socialised with had thought so little of your humanity that they had taken pleasure in treating you like some fraternity ritual, reducing you to a shared stepping stone on the way to their own burgeoning masculinity? In more modern terms, imagine the slut-shaming spat out by the toxic bro-yness in your college years was printed decades later for the world to see, forcing you to confront the way you were discussed without your knowledge, about events that were untrue. Rumours regarding sexual activity affect women for more harshly than men.

“IS SEX FOR FUN DANGEROUS FOR WOMEN?”

But it’s almost completely redundant to point out the double and triple standards at play here, they’re so blatant that the standards are actually fighting with each other for dominance. Enjoying sex is so dangerous for women that even the rumour of it, true or not, is enough to ruin their reputation for life. But the same rumours levelled against men – especially wealthy, straight, white men – often do little to decrease the subject of the rumours in the eyes of his peers, and may often enhance his standing.

It poses a question almost too horrible to face, but too obvious to ignore: is sex for fun dangerous for women?

In one sense, no. In sexually progressive arenas, women are often exalted in ways counter to cultural tradition. In swinging communities, the hierarchy is generally women first, then couples, then single men, where single men are generally the least welcome attendees (though still welcome, of course). The same is true in kink scenes, although there are many, many male hands that are far from clean, and rumours of sexual assault are rife even in places that might claim to be safe.

On the whole, casual, hedonistic sex and hooking up is safe most of the time. But women are at far higher risk than men in such circumstances. I don’t have the statistics to prove this, but I think it would be safe to say that fewer men than women feel the need to text a friend their location before they go to meet a stranger for sex.

But the risk to women from hedonistic sex is not only a physical one, as proved by the case of the woman I mentioned earlier, who claims she didn’t even have sex with these men. But the repercussions of the actions of these men have followed her throughout her life.

An article in the Guardian this week, also on the back of this story, details the writer Leslie Bennett’s experience of high school slut-shaming, and how it affected her throughout her life. It’s a story few men would be able to relate to, but many women know all too well. Here’s an extract, from her life as a 15 year old virgin:

“I was dating a boy I really liked, so when another classmate made a pass at me, I explained that I was going with someone else, and I turned him down. The next morning, my “friend” – let’s call him Rat – told classmates that I’d slept with him. Since I had declined to have sex with the boy I actually liked, the ugly rumor made me look like a lying hypocrite. Hurt and humiliated, my boyfriend promptly broke up with me, leaving me heartbroken and bewildered. I hadn’t even done what I was accused of doing – and yet that didn’t protect me from public scorn, let alone the loss of my first love.

“But there was worse to come. When I started college, I was 16 years old. On my first day, I met a sophomore whose blue eyes were speckled with gold. Soon we were spending every free moment together. He knew I was a virgin, and he was respectful of my wishes – until his roommate went home to Boston for the weekend. In a diabolical coincidence, the roommate was invited to a party where he met Rat, who was attending college there. When he learned the name of Rat’s hometown in New York, he asked if Rat knew me – whereupon Rat gleefully regaled him with a sordid account of what a tramp I had been in high school.”

Painfully, she was dumped again, over a rumor invented by a resentful guy embarrassed that he’d been rejected. She says that 50 years on, she still won’t attend a school reunion, the memory of that slander being too humiliating to confront.

Such is the infectious power of a self-congratulatory lie.

But it gets even more dangerous, and if you consider it in the following terms, it might shed a little light on why progressive female sexuality might be threatening to certain powerful quarters.

It’s actually a simple equation (read: I’ve vastly oversimplified it to make this point): women who engage in hedonistic sex and personal pleasure are likely to choose the men they find most sexually attractive. That’s a relatively new innovation, in societal terms. The obvious inverse of this is that the most attractive men tend to have the most sex.

Sounds straightforward, right? Perhaps there’s even an element of egalitarianism in it. But what’s left is an underclass of men who believe they have the same entitlement to sex as the other men, but they’re being actively denied access to it. They were raised with traditional preconceptions of sex, and perceive sex as something owed to them – but the increasing freedom of women to have casual sex with partners they find more attractive has left this group dangling in the middle. And as a result, they are filled with anger, resentment, misogyny, disenfranchisement, and they’re looking for someone to blame for their lack of cultural influence.

These men identify as ‘incels,’ a putrification of insecure masculinity, misanthropy, pick-up artistry and entitlement. And somehow, one of them is running the free world, validating the often violent views of countless others like him.

This is how ‘harmless’ high school hijinx and rumours can eventually become dangerous over time. Rumour, misogyny and slut-shaming: THIS is the Devil’s Triangle.

But even this argument is flawed. Female sexuality is only ever discussed in its relationship to men. I’ve done it myself throughout this piece, despite my initial intention to discuss some recent statistics about the positives of casual sex. Until the approach to this conversation is changed and female hedonistic pleasure is more broadly discussed on its own merits, decoupled from its relationship to male pleasure, the centre of the conversation will always be men.