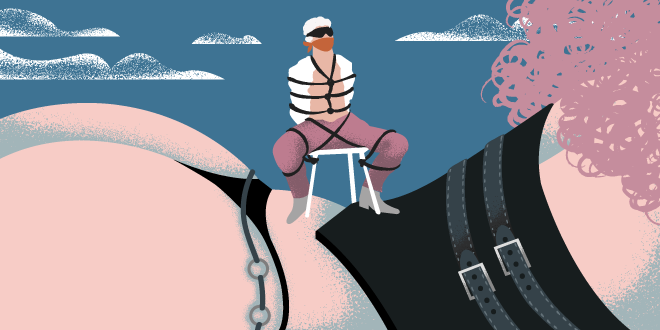 And then, it was dark.

He sat in the unforgiving, iron-backed, armless chair, and felt his other senses swell with purpose. The silk of the blindfold made him more aware of the strength of the restraints around his wrists, tied behind the back of the chair. Suddenly, the warmth of her body close to his was palpable, and the sound of her subtle breath was deafening. The smell of her perfume, the cool air on his skin, even the sense of his own presence in the room; everything was more intense. Everything but his sight.

The chair he was tied to was positioned at the foot of the bed, facing the headboard, and he sat patiently as she restrained him. Wrists first. Then his ankles, tied to the legs of the chair. Then the blindfold. He was permitted to watch his own restraint, but nothing else. His own submission would be the last thing he was allowed to see until she had finished with him. Having not even been allowed to strip, he still wore his tux. 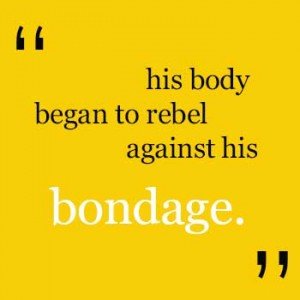 “You may not touch yourself. You may not watch. You may not talk. Do you understand?” she asked, running a finger up his thigh. He nodded slowly, suppressing a gasp at the contact.

She ran the same finger up his body, over his chest and across his neck and then turned towards the bed. He listened to her walk away, the tap of her heels muffled by the carpet. He heard her underwear slide down her legs and the covers rustle as she reclined on them, shuffling closer to him, and he heard his pulse quicken in his ears as his body began to rebel against his bondage. He wanted her, and she knew it. And she wouldn’t allow it. Not yet.

She positioned herself as close to the foot of the bed as possible, propping herself up with pillows beneath her shoulders so she could watch him struggle to watch her. His frustration was her pornography, and she was going to tease him until he could bear it no longer, and then more.

She opened her legs wide, resting a foot in each corner of the bed. If he had been able to see, the explicitness would have taken his breath away. He heard the unmistakable sound of skin moving over skin and her breath deepening as she began to explore her body in front of him. His body stiffened in response, his arousal obvious through the wool of his suit pants.

She moaned as she ran her fingertip over and around her nipple, then moved her finger to her mouth and sucked it noisily before moving it back to her nipple, her other hand inching further and further down her body. Her moans grew louder, and his desperation grew with them. And all the time she watched him.

Her left hand pinched and squeezed her breasts as she finally allowed her right hand to slip down between her legs and seek out her wetness. 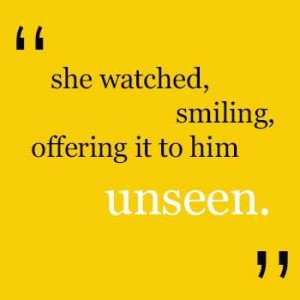 “Oh fuck…” she murmured, grinning at the effect she was having on him. She lifted her hips and pushed a finger inside, bringing her other hand down to pleasure herself further. He bucked against his restraints as he heard the intensity of her play increasing and she watched, smiling, offering it to him unseen.

She pleasured herself long and slowly, speeding up and stopping, writhing, moaning noisily, taunting him, sustained by his frantic sexual anguish. His panting matched hers precisely: he was breathing in time with her because that was the only connection he could forge.

His heart thumped in his chest as he heard her inhale, the first convulsion of orgasm seizing her body. She was no longer watching him. Her eyes were closed and her head thrown back. She was going to come to spite him.

Still using two hands, fingers working hard within and out, she let the frenetic sensations overwhelm her, her legs wide and taut. Her stilted moans coalesced into one single, long, accelerating groan, increasing in volume as she moved from the calm plateau before the storm into the thundering impact of her climax. The groan stopped for a fraction of a second as all the muscles in her body froze – and then exploded in pleasure. Her orgasm rocked her and then subsided into aftershocks. 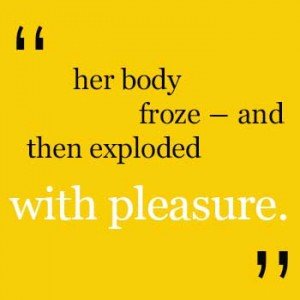 She lay, devastated and satisfied. She opened her eyes and looked at him, leaning forward, as close as his bindings would allow, his mouth open and a complex look of anger and lust on his face.

She caught her breath, glowing and flushed, and smiling she removed herself from the bed. On shaky legs and unsteady heels she walked round to him, and leant down to his ear. She traced a glistening finger over his lips and whispered, “I’ll be back later.”

He listened to her step across the carpet, pick up her black silk dress, and then he heard the door close behind her.