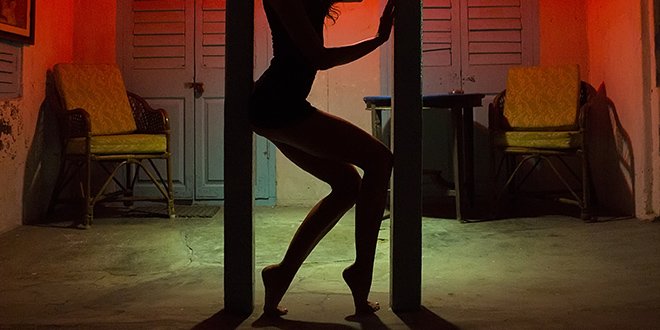 I concentrate on my breathing, on my chest filling and emptying as I sit on the cool tiles. I untangle the worries that go around my head like a demented merry-go-round of stress and I get rid of them, one by one, until my mind is left blank. An empty circle. The trickle of tap water sounds in the background, slow and precise, but almost as if the water is becoming heavier and heavier. Time seems to stretch, my muscles go numb and my eyes beg to open up. I let them do it when, as if you were my salvation, I hear the click of your heels approaching.

I lift my eyelids with as slowly as I can muster, the picture of inner peace while my heart rate has already begun to quicken. I hear the familiar notes of the Arctic Monkeys begin from the direction of the turntable. For years I thought that that object had been the most absurd purchase ever until you put that vinyl for the first time, then something happened. The Favorite Worst Nightmare became the signal, the notice, the claim.

I turn around, imagining what I will find behind me and smile, victorious, upon discovering you, half-naked. You have taken off your heels, and your shirt is slowly accepting the same fate, saying goodbye to your body button by button. You look at me intently as you work your way to the last one, wearing that haughty expression, serious and unaware that that you put it on every time you hear Fluorescent Adolescent.

But this matters to you, and it urges you. You want it already, you want me already. That’s why you’re naked and striding toward me, then crouched on your knees, pushing my body with yours, assuredly but not roughly, until my back is on the floor. I feel the contrast of the cold of the stone and the heat that you give off and shiver.

But I barely have time to register this as your lips demand attention from mine,with fierce and extreme urgency, although I distinguish, between toms and cymbals, the thunder that seems to be breaking the sky tonight.

It’s as if they wanted to warn me how hard you want it today and the haste you have, and you should be encouraged to go one step further.

You take off my leggings, then my panties, and place the flat of your palm firmly against my body – making subtle circles while letting a single finger tip rest for just a moment, then sliding in with ease.

I stir under your body, prey of discomfort and, taking your waist, I ask you in silence to go to the sofa. As the first song comes to a close, you  stop before helping me rise and then abandoning me just as quickly. I hear you opening the drawer and as the next track begins, you’re standing in front of me holding the only toy we’ve yet to use together. For a few months now, not only have you taken control of the turntable, but also with the direction taken by our sexual encounters. Once, it would have infuriated me but I’ve found my pliability in your hands to be an intoxicating surrender.

You lower your panties before lying on the couch with your legs spread, and I’m entranced for a few seconds by the sight of you. You break the spell by gesturing at me with the strapless dildo, and I not help but wonder what it is that excites you most of the whole situation. How do you know that I will do everything you ask me without speaking? So digging my eyes into your wet sex once again, I take the toy and I put its shorter end into myself with an exasperating slowness. When it is fixed, I take your hands and place them on your knees, making sure they’re fully splayed. As always, I am amazed at how white your skin is and how your veins trace their colorful way below it. I caress your thighs upwards in an attempt to prepare for what is to come, but you grab my wrists firmly in protest.

I look you in the eyes and I see fire in them. That’s all I need. I bring the dildo against you and look into your eyes. You nod and place my hand on its shaft, pushing it into yourself, but letting me maintain control. I’m penetrating you slowly, but not sofly.  Only when the toy is completely inside you do I let my hands free your breasts from the cups of your bra to caress them. With a crack, the storm that had been threatening outside began its outburs, and the torrent of rain sounded as if it was urging me on; and so I complied with short, shallow thrusts, punctuated with deeper ones that make you moan, mimicking the thunder and The Bad Thing .

Soon after a lightning filled the room with light, and take the opportunity to look at your features. You are so close and I am so eager to please you that I can’t think of anything else but placing myself inside you, as deeply and wholly as I can. As if we had rehearsed the movements a thousand times, your body and mine fit together and your hand found my clit, matching my rhythms. You don’t know how much I had missed you touching me, and the only way I can express it is to do the same with my fingers, clumsily as I hide my face in your neck and bite, hard. I hear you moan wildly and I’m urged on, harder and faster.

I try to concentrate on the feeling of your hard caresses, your heavy breathing, the way your other hand squeezes my ass. 505 is ending, so there are seven minutes left; a deadline that excited me with a sudden heat that envelops me from the head downward. Through the haze I see your face consumed with pleasure and that is enough – I bite my lip to stop myself from screaming your name but know that you noticed anyway, as your orgasm follows swiftly follows suit.

The shock of the drums makes me partially recover consciousness and I find myself resting on your chest, still inside you and absorbed by the way your heart begins to slow down post-climax. You can only hear the music and some background thunder, but I think it’s already starting to subside. I sit up a little to look at you and, when you open your mouth, we both know that Matador has a few seconds left to finish, which means that you are skipping the rule of silence that you had set yourself.