Alan always hated it when they asked, “Do you prefer a man or a woman?”

Alan had gone to massage therapists for many years. He was a workaholic who brought worry upon himself, and while others might carry their stress in their stomachs, he carried his in his body. His muscles often were a ball of tension that even his foam roller at home could not work out.

He hated their question nearly as much as the phrase that every masseuse he had ever had said to him after a massage: “How do you feel?”

“Sir, do you prefer a man or woman?” the receptionist on the other end of the phone repeated.

“No preference,” is what he usually said. Sometimes, he would add, “Whoever is best at relaxing muscles.”

Alan surprised himself today when he told the receptionist, “A woman, please.” Where did that come from? he wondered.

After work he hit the gym, showered, then drove to the massage parlor. He had forgotten about his strange response over the phone until now, sitting in the waiting room, he heard a sweet, casually seductive voice call out, “Alan?”

Alan looked up from his magazine to find her; petite yet well proportioned, her uniform scrubs didn’t hide the fact that she kept herself in shape. Her eyes were almond-shaped, her hair black, and her skin the color of caramel.

“I’m Ally. I’ll be your therapist today,” she said. It sounded as if she were tasting each word, like each syllable were a caramel. Her voice, alone, aroused him. He shook her hand, and her skin was baby-soft.

Alan was Ally’s last client of the day. She was glad when she saw his personal hygiene seemed to be good and that he had good skin. And when she shook his strong hand and gazed into his baby blue eyes, butterflies fluttered in her chest and the hair stood on the back of her neck.

Ally led Alan to Room 5. She asked him to undress and lay face-down on the table. She left the room, giving him privacy to disrobe and crawl under the sheet.

With his head in the massage table’s cradle, his eyes closed, Alan’s world slipped away into darkness. Alan enjoyed this aspect of massage; his other senses nearly disappear, leaving him with an acute awareness of his body and its feelings. He found it to be a deeply meditative.

But when he heard the door to Room 5 open, the soft footsteps of Ally coming back in, his heart began to beat faster. Unusual, Alan thought. He was supposed to melt, deeper into dreamlike relaxation.

He could smell Ally: flowers, or strawberries? Alan couldn’t be sure. The scent was mild and sweet. Ally stood near the table, dimming the lights, rubbing oil into her hands. Alan could feel her heat on him. Enshrouded in his dark, lightless world, he imagined her warmth as subtle waves of orange that brushed his neck, shoulders, and cheeks. Alan couldn’t help but imagine Ally’s tight, round ass inches from his head, his face just as close to her pubis.

As Ally worked her hands over Alan’s muscular back, (bringing him a smooth, calming pleasure that directly contradicted the stimulation that had begun in his loins), she noticed she could smell him. And she liked it. It wasn’t cologne, it wasn’t aftershave. It was simply him and it was more attractive than anything Alan could have ever said.

Ally was strongly attracted to her client. She smiled to herself as she accepted that fact, and she let out a quiet chuckle. Alan heard it. Mildly raspy, even her laugh sounded like tasting something delicious. The sound wrapped itself around him and Alan thought, “I am outrageously smitten by this masseuse.”

As she worked his body, her hands served as her eyes. Removing a bit of the sheet to work his lower back and gluts, the butt s of her palms traced the sinewy figure she drew in her mind. Later, as her thumbs dug into his calves, hamstrings, and inner-thighs, she imagined the pieces as a whole, standing, naked, in a well-lit place. She liked what her hands informed.

Meanwhile, Alan tried to imagine a more complete picture of the body attached to the hands that worked on him. The heat Ally gave off provided a crude type of sonar in his pitch-black world. When she took a step towards the front or back of the table, he felt a gentle wave of warmth . He pictured her hips, her smooth tummy and toned waist above.

When she worked his upper back, she leaned forward, digging into him with her elbow. He could gauge the length of her upper arm, and he imagined the perky breasts that hung just above his spine. When Ally sat on a stool near his head and started to knead his neck, he imagined her strong shoulders rolling forward with each stroke. He imagined her not in the nurse’s scrubs that she wore, but in a deep-necked top that hung off one shoulder, exposing the line of her clavicle. In his mind, he saw a bead of sweat meander down her neck before following the collar bone to her sternum.

And so it went this way for half an hour. It was time for her to massage his chest, arms, and quadriceps. “Scoot down for me, Alan,” she whispered, “and turn onto your back.” She lifted the sheet to make it easier for him. When he had moved, and she let the sheet back down, she and Alan noticed it at the same time.

Alan was fully erect. It lifted the sheet, comically, like a tent.

Alan was terribly embarrassed, his cheeks flushing with color. He refused to open his eyes to try to make out Ally’s reaction. He didn’t know what to say.

Then, he heard her walk away, to the corner of the room. He heard of masseuses who put a pile of towels on a client’s groin in situations like these. Perhaps that’s what she is about to do, he hoped.

Before she stepped away, Ally had frozen. Below her, Alan’s cock reached for her through the sheet, through the dim light. With any other client, she would have been appalled, disgusted. She would have begrudgingly finished the massage, keeping her distance from his crotch.

But in this moment, with Alan, the perched sheet brought her excitement and shortness of breath. The butterflies found their way from her chest down to the place below her navel. She wanted Alan. She found that, for the first time in her life, wit hout kissing, with no foreplay to prepare her, she was ready to have sex. The last thirty minutes had been more than enough preparation. She was ready, right then, in that moment. And she would not let that moment pass.

Ally stepped into the corner and slipped off her shoes, scrubs, panties and bra.

Lying there, cock in the air, heart in his throat, Alan felt Ally’s presence return. Her heat on his thighs, and then her weight on the massage table. She knelt over him, her feet touching his. Her hands worked the sheet up his oiled legs until it uncovered his groin, releasing its full peak. He felt her shimmy forward, the heat of her thighs washing down on his scrotum and erection.

Completely incredulous to what was happening, Alan thought it was perfectly possible that he had fallen asleep and was having a gorgeously obscene dream. But if this was reality, Alan welcomed it, gratefully.

Her flowery smell overcame him, and she guided him into the soft, inviting hollow between her legs.

Alan gasped. He reached out, grasping Ally’s hips, confirming in his hands the contours and firmness and weight that he had imagined for the past half hour. She rode him, letting him penetrate deeply, caressing his ribs with her knees when she was low in her undulation. When she lifted herself up his shaft, she let out soft cries. Mindful of the people in the rooms around them, Ally kept her moans as quiet as she could. Still, to Alan her aria of bliss was delicious and lascivious, summoning his ears towards the sound.

He sat up. If the lights were bright he would glisten in the massage oil that coated him. Alan rocked his hips to her rhythm. His tongue found her collarbone, of which he had daydreamed. Her pussy and his cock were overcome with joy they had found.

She let herself fall onto her back, head hanging off the foot of the table, so he could be in full control of his thrusts. Her fingers found their way to her clit, and it was almost impossible for neither of them to holler at the top of their lungs!

Ally, head still hanging off the table, eyed the clock on the wall; their hour was nearly up. Someone would be the wiser if they were still in this room when the hour ended. And as much as she enjoyed Alan probing every minutia of her throbbing pussy, and despite the exhilaration with which her clit burned, she needed to finish now.

Ally sat up and pulled away from Alan. She got off the table, and spun away from him.

As his eyes adjusted to the darkness, Alan stood. He saw Ally’s hourglass frame bend forward, slowly, until her fingers brushed the floor. Her a s s was as he had imagined it. Round. Tight. And there it was, her beautiful little pussy that had already taken him in, wanting more. Pink, exposed, and wet, it called him.

He plunged himself back in, and Ally bit her lip to stop from screaming, “OH FUCK, YES!” He rode her, powerfully, at a quick (but not barbaric) pace. As she had hoped, he had found her G-spot, and it vibrated like a trapped love god. The pleasure grew and she tightened around him. Starting in her toes, she convulsed, and she braced herself against the wall. She orgasmed and pinched her eyes closed, basking in the intense euphoria. Only moments later, he exploded with a final powerful thrust.

They caught their breath.

Pulling away from him, Ally looked into his blue eyes, and smiled. “So,” her sultry voice queried, “How do you feel?”

Today, he didn’t mind being asked the question. 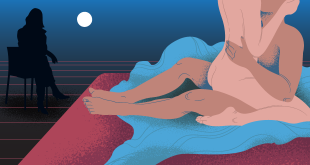 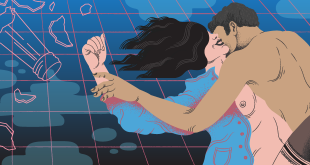