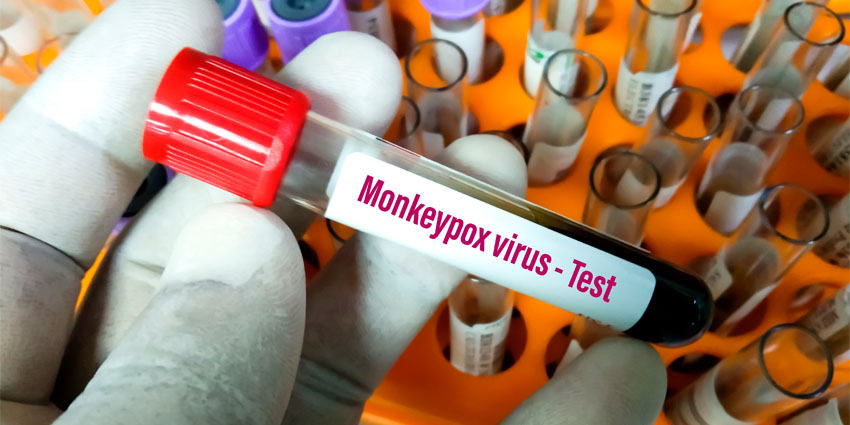 “It felt like someone shoved a corkscrew with spikes up my ass and mercilessly kept twisting,” River Mitchell, a 30-year-old OnlyFans creator from Texas, remembers of their agonizing 21 days with monkeypox. “The pain was excruciating, I’ll never forget it. There were days that I would just lay on the floor sobbing.”

Mitchell suspects he contracted monkeypox at Daddyland, a weekend-long circuit party and music festival for daddies and their admirers, which occured over the July long-weekend. A week after the event, Mitchell awoke to swollen lymph nodes on his groin and slight pain in his rectum. After being tested for suspected STIs and monkeypox for good measure, Mitchell tested positive for monkeypox and was advised to quarantine for as long as he showed symptoms.

Mitchell didn’t have the common symptoms like blisters or rashes, nor did he have many lesions. He could spot a few on his torso, but most were contained to his rectum. The excruciating pain from these anorectal lesions was unfathomable, an “11 out of 10” on the pain scale. Daily bowel movements were traumatic.

“I would have to use a shower shot with warm/hot water to relax my sphincter muscles enough to simply go to the bathroom,” he says. “I remember just crying in the shower wanting the pain to go away and to feel regular again.”  (Some audio has been posted online to offer a sense of the pain people have experienced.)

Mitchell’s days were spent taking long epsom salt and oatmeal baths to temporarily soothe the pain, and sleep was impossible. In order to get any rest, Mitchell would knock himself out with CBD gummies.

About a week after his diagnosis, Mitchell was prescribed 300 mg of Gabapentin, a strong painkiller that targets the nerves, and would take three each day, along with ibuprofen and acetaminophen. Even then, this only made the pain tolerable. Something as simple as standing up still caused intense pain.

Despite the physical suffering, Mitchell says the most aggravating part of his experience was trying to receive the smallpox vaccine or the antiviral drug, TPOXX, which, in Texas, requires a lot of legal paperwork and red tape to get a hold of. “The failure of our government to recognize that this was a new pandemic and to immediately begin combatting it shows their treatment and urgency regarding the LGBTQ+ community,” he says.

Many believe the sluggish response (to vaccines, information and testing, in particular) is in large part homophobic. Dr. Carlton, a GI doctor and leading monkeypox educator, agrees, saying the response depends almost entirely on where you live. “I have guys that live in San Francisco who can walk into a local clinic and walk out with TPOXX, while people in conservative places like Texas really struggle,” he tells THEM.

To this point, Kyle Planck, a 26-year-old PhD candidate working in infectious diseases in New York, qualified for the expanded access protocol for TPOXX a mere week after experiencing flu-like symptoms.

He, like Mitchell, had swollen lymph nodes in his groin and experienced excruciating rectal pain that became substantially worse during and after bowel movements. In order to go to the bathroom, Planck would have to mentally prepare for the pain.

Often too exhausted to be productive working from home, Planck took five or six baths each day as it was the only thing that would offer a hint  of relief. “I also tried using cocoa butter suppositories, which were helpful to some folks, and I would use Vaseline to moisturize the painful areas after each bath,” he says.

Overall, Planck counted 35 lesions over his body. But within just two days of taking TPOXX, half of these lesions disappeared, and after five, the rectal pain had become substantially less severe.

Planck suspects he contracted monkeypox during New York Pride, and as one of the earlier infected, says information was scarce, and would obsessively check the CDC website in between sitz baths and naps. “I was pretty much on my own, relying on the internet and the writings and videos of a few other patients who had shared their experiences online,” he says.

Because access to information was slow and limited, Planck and many others found personal accounts and peer advocacy groups incredibly helpful regarding symptoms, vaccinations, treatments, and support.

While seeking these helpful threads on MPX, however, Jordan Bellamy, a 26-year-old student in Berlin, fell headfirst into a rabbit hole of dark content expressing how ‘dirty’ he was for contracting MPX. Since he was alone and isolating, this content weighed so heavy that the emotional labour of monkeypox became “far worse” than the physical.

“Being part of the ‘first-wave’ of MPX patients in 2022 was terrifying,” he says. Without access to information and testimony from prior cases, not knowing what could happen to him was a daily threat. “For all I knew, it could have gone very south for me very quickly. I was incredibly lonely and, honestly, terrified.”

Some cases have caused irreversible damage. Alex from Montreal (who chose not to disclose his last name) contracted monkeypox on a highly anticipated trip to Istanbul, where he was the first of five cases.

A few days after the lesions appeared (accompanied by “the worst pain” he’s ever experienced in his rectum), Alex went to the hospital, where over the next month and a half the monkeypox “wreaked havoc” on his rectum. He had proctitis (inflammation of the lining of the rectum), a fistula, abscesses and ulcers in the area.

After undergoing three different procedures to drain the abscesses, Alex’s anus was in such dire condition that he was given a temporary colostomy bag. The hospital also gave him generous amounts of morphine throughout the day to manage the pain, though it was still unbearable.

Each person I spoke to said the queer community was incredibly kind and appreciative of their vulnerability, warnings and advice online. But it was a different story regarding the general public. Afer sharing his experiences with monkeypox on CNN, Planck was the subject of an onslaught of homophobic tweets making fun of the way he spoke and his sexuality, publishing harmful messages like, “Maybe if he didn’t have gay sex he wouldn’t have gotten it.”

Since the virus disproportionately affects men who have sex with men (MSM), homophobia is a major area of concern, especially when it comes to messaging. On July 23, the day monkeypox was declared a public health emergency by the WHO, Director-General Tedros Adhanom Ghebreyesus made a point to emphasize “stigma and discrimination can be as dangerous as any virus.”

Since 94 percent of cases among men who have sex with men (MSM) have been spread through sexual contact,  50 percent of which are one-time hookups, public health officials have recommended a temporary pause, but this can be a very precarious message to convey, especially regarding queer folks. Even Carlton, who has been working tirelessly to inform others on all aspects of the virus through daily social posts, has received criticism for the recommendation.

“I think as a community we are very sensitive about the perception of being judged for our sex lives,” Dr. Carlton says. “We are also targeted by conservative groups to serve their political agendas by their pointing to our sexual activity as immoral or perverted.” Part of queer liberation is the ability to express ourselves sexually without heteronormatively perceived limits or standards. As a result, recommending a pause or reduction in sexual partners is perceived by some as a threat to this sexual liberation and affront to the MSM community.

Despite the perceived affront, most who’ve had monkeypox are using their platform as a means of educating and informing others. “I was posting so regularly that I began receiving private messages from other people who believed they had been exposed and wanted to know what to do and how to make the experience less severe.”

Evidently, queer people have become quite adept at handling an outbreak with or without support, and we’re already making significant strides. On September 2, an analysis of CDC data found that monkeypox cases in the United States have fallen by 40% since August 10. Cases are also dwindling in European countries, the WHO announced Wednesday in a briefing. Experts say much of the decrease may be attributed to behavioural changes among men who have sex with men and others in their sexual networks.

“I’m incredibly proud of the way our community has come together to fight this,” Dr. Carlton says. “While we need to continue to practice vigilance as more await the ‘fully immunized status’, I’m hopeful that we are heading towards life getting back to normal in the coming months.”