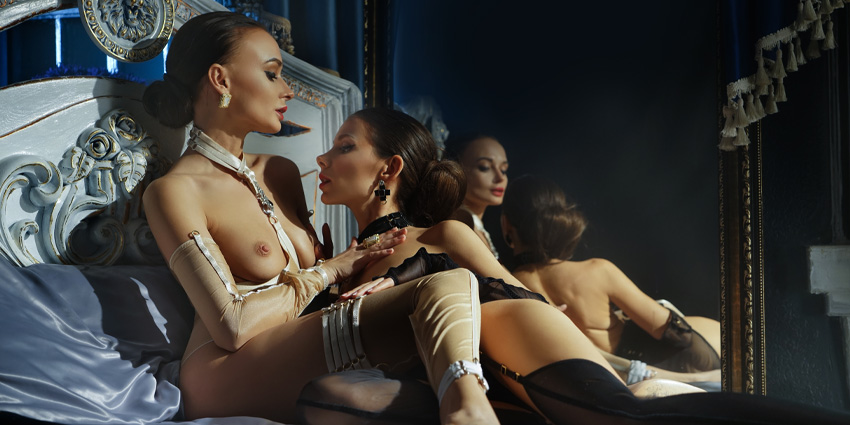 Being a good teacher means knowing your speciality subject very well indeed. You must also know how to present a topic clearly to an individual or a group so that they understand and learn something new. My passion for teaching went far beyond the classroom; I also loved playing the teacher in an intimate role-playing scenario. During such games, my teaching style could not be more different; in real life, I was always friendly and approachable. Whereas in my bedroom lessons, I was the total opposite. I was much stricter, and not so forgiving of the didactic difficulties of my private students.

I woke up feeling mischievous and full of energy, despite having slept only a few hours after our night at the lesbian club the night before. I got out of bed trying not to make any noise so as not to disturb my former student who was lost in a deep sleep. As I made my way to the bathroom, I saw the pile of clothes that we had left at the entrance of the apartment the night before and I felt a throbbing sensation between my thighs as I remembered how they came to be there.

After my shower, I was feeling even more excited about the class I was about to teach. But I waited until my student was in the shower to transform into a sexy teacher. I got dressed quickly; I wore a garter belt, stockings, heels, a black knee-length pencil skirt with a front slit on my left thigh, and a white ruffled blouse. Of course, I neglected to wear lingerie, not only because I knew it would get in the way during class, but also because undergarments would prevent physical contact in the places where I most craved it. There was no time to put on makeup, but there was time to put my long hair in a high bun and put on some glasses. I also grabbed a 30 cm wooden ruler that I always kept in my bedside cabinet for moments like these.

I was still rehearsing my English teacher’s dialogues in my head when I heard the bathroom door open. When she finally came through the bedroom door, only covered by a towel, she looked at me open-mouthed and said absolutely nothing. I immediately got into the role:

I confess that I felt quite ridiculous at the time, but after all the effort I had put into putting on such a performance, I decided to continue.

“Repeat after me!” I yelled as I caressed her inner thighs with the 30 cm ruler.

“I am, you are, he/she/it is, we are, they are,” she said like a good obedient student. I couldn’t help but feel relieved to know that she was following my game and that I hadn’t wasted my time dressing up.

“No!”  I exclaimed, shaking my head and sighing with mock disappointment and frustration, “It’s ‘to be’! It seems to me that you haven’t been paying attention in my classes!” I yelled in feigned anger before hitting the ruler against the wall with such force that my bun almost came undone.

She approached me and began to run her cold hands over my thighs, until she lifted my skirt, exposing my stockings, garter belt and my naked sex.

“My God…” She sighed and brushed my labia with her fingertips, “You’re right, teacher, I haven’t been paying attention. I have a hard time concentrating in your classes.”

“And it’s hard for me to teach you…” I said before closing my eyes and enjoying her caresses.

“Do you have lingerie for me?” she asked.

Lingerie for her? I was confused, as I knew that she rejected conventional female fashion and that she was quite proud of her androgynous style. But I gathered that this was not the time to ask her about it.

“What a demanding student you are! I also have a wig if you want…”

It was a long platinum blonde wig with bangs that contrasted against her dark skin. I opened a couple of drawers of lingerie and she pulled out a couple of items. She looked at them with disapproval before putting them back in the drawer.

“What do you recommend?” she asked in a feminine voice and a playful smile which I returned before opening another drawer and pulling out a black PVC mini dress.

“What do you think about this?”

“Whatever you say, teacher.”

I was surprised by her enthusiasm for dressing feminine all of a sudden; it was the total opposite of how she wished to present herself in real life.  It was also like going back to childhood and playing dress-up, but this was infinitely better. The mere idea of ​​feminising her made me crazy. I wanted to enhance her breasts and not disguise them, as she often did with her own clothing choices. Despite being a woman, being so androgynous, this seemed like crossdressing, especially because of the wig and her masculine way of walking, which was accentuated when she walked in heels. Her obvious clumsiness was sexy to me and knowing that she was doing something she was not in the habit of doing only increased the horniness of the situation.

Once dressed, she put on an R&B music compilation and began to move her hips with exaggeratedly feminine and sexual gestures while I sat on the edge of the bed, watching her flaunt her body, as if I was receiving a lap dance.

“I had a very good dance teacher… What’s up? Don’t tell me you don’t like how I dance…” she said as she rubbed her wet sex against my thigh to the rhythm of the music and rubbed her breasts with her hands. Next, she lowered her hand to lift her dress, exposing her perfect sex, still following the beat of the music.

My own pussy couldn’t take it anymore so I grabbed her around the waist to press her closer to me. The scent of our combined arousal filled the room and I didn’t know if it was me or her, or a combination of the two. I was thirsty to devour her and finish what I had started the night before. I held her even tighter, guiding her to lie on her back on the bed. I parted her thighs and went straight to her clit to greet it with a little kiss before rhythmically flicking my tongue tip against her. She was so wet that I felt her nectar against my chin. But just like the night before, after a while, she pulled my head away from her.

“Why don’t you let me continue?” I asked.

“It’s just that there’s no time,” she said, looking at the clock on the bedside table.

The games had just started but the weekend was almost over. I felt sad to think that in a couple of hours, I would have already said goodbye to her and that all this would be nothing more than a memory. I lay down and she rode me furiously, both with our skirts raised so that our naked pussies could make contact. It didn’t take long for her to cum and I felt my pubic pain again, a pain that I knew would be with me for several days. There was no time for my orgasm and I didn’t care. What mattered most to me at that moment was having my eyes open so I could mentally record the image of her and how she lost control as she rubbed herself against me; I was sure that it would inspire me for many solo orgasms in the future.

Moments after coming, she jumped out of bed and pulled off her wig, throwing it to the floor, and we suddenly snapped back to reality.

“Call me a taxi to the airport!” she said and got dressed quickly.

I helped her gather her things that were all over my apartment. After the panic of packing her suitcase, as soon as we sat down on the sofa to catch our breath, I received an SMS notifying me that the taxi was already downstairs.

“Are you sure?” I was disappointed.

“Yes,” she said, looking away. “Well, then, thanks for everything,” she said and gave me two kisses on the cheeks, with the same coldness and distance that she had shown me in the arrivals hall at the airport 48 hours before. It was as if nothing intimate had happened between us at all. She headed for the door in a hurry, making it obvious that she didn’t want me to follow her.

After hearing her walk out the door, I went straight to lie down on my unmade bed that still smelled of her. I closed my eyes as I tried to process all the events of the fantasy exchange weekend that I had just experienced. There were a million things going through my mind that it was like having an overdose of sensations. I felt even more confused than before and I realised that I had been incredibly naive to think that I could satisfy my curiosity and desire to be with another woman in just one weekend.

The only thing that was clear was that something inside me had changed. I had discovered a whole new world and I was keen to go deeper into it and continue exploring these unfamiliar territories.