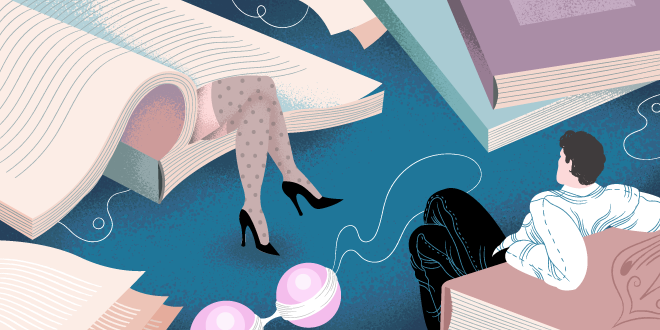 Cole walked past the window of the lingerie store, and saw the women who worked there were dressed sexily with some of the items for sale. But it was the saleswoman next to that store, in a bookshop quietly tucked into the empty street corner, who was far sexier to him than any other woman. He saw her while going home from work nearly every night. Now, she was in the window, with her long hair managing to spill out of the severe bun it was pulled into. She wore glasses with cat’s eye frames and had delicate vintage embellishments adorning her work clothes.

He was a bibliophile, but he got nervous going into that bookstore. Cole was sure she would notice he was awkward around her. He adjusted his glasses, and looked into the store but knew he could not go in because, well, what would he say to her?

One day, on his way home from work, he saw her in the window of the fancy lingerie store. She fingered every item with care, but he noticed that she was trying on pantyhose, the kind with dots and seams up the back. Nice, he thought to himself and then looked away. It was dark and he did not want to be seen looking.

He went to the coffee shop-cum-bar down the street, and looked up at the menu board. The sight of her legs in those seamed tights stayed with him as he surveyed the menu. The store had a smattering of people in it, but his heart stopped when the door opened.

There she was, the shop girl.

She had on a vintage coat, and her pretty dark hair was again pulled into a messy bun , with a sort of Dita von Teese-vintage sensibility. When he looked at her, she looked at him a bit startled and then looked away. She stood behind him on the line.

“I’m not sure what I am getting, did you want to go ahead of me?” he asked.

She looked at him a little dazed.

“No,” she blushed, and waved her hands. “I do not know what I want either!”

Cole looked at the man impatiently standing behind them, and shrugged.

“Can I buy you a coffee, does that help you make up your mind?” Cole asked her.

She blushed, and waved her hands again which Cole found adorable.

Cole looked nervous, but there was something to the smirk on her face that made him not give up right away.

“Okay, I have to tell you this…I just got this app on my phone today and I knew you were going to be in this shop. I thought you were hot, so…I don’t even drink coffee!”

She showed him her phone, and there was a picture of him.

Cole felt himself blush, as he looked at the picture of himself from a hook up app he had downloaded one afternoon and then abandoned shortly out of shyness.

“What’s your name—since you know everything about me!”

“Yvette,” she smiled. “And I do not know everything…yet!” 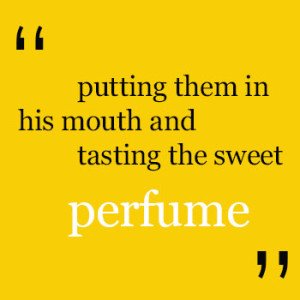 The shop girl—Yvette—and he got to know a lot about each other very quickly. Yvette’s personal style may have been very retro, but she had a love of technology. Her phone which she discovered him on—he never told her that he noticed her from outside of the bookstore—was the most updated. In her apartment, parallel to her vintage furniture was her very modern computer among other state-of-the-art gadgets.

But Cole was not sitting on her bed to look at her gadgets. He took off Yvette’s glasses, putting them in his mouth and tasting the sweet, delicate perfume of her skin. Yvette squinted at him near-sightededly, but still managed to convey an intoxicating combination of adoration and lust, and he kissed her because he loved the contradiction she was.

“I need to be inside of you, Yvette…” he whispered, chewing on the tip of her earlobe.

His fingers slipped down into her panties, and she put her hand over his. Cole thought she was being shy, but Yvette moaned like he had never heard her moan before, as her hand joined his. Then he realized that he felt a bit of string inside her.

“I need you inside me too, but I need to this take out…”
“You have your period?’

“No, I am just getting my workout done…down there…”

Yvette pulled up her skirt, and he slipped his finger under her garter belt. She was not wearing any panties and that shocked the hell out of him. He watched her in amazement, as she pulled a pink ball from out of herself and took a deep breath.

“Ben wa balls. Well, ball,” she smiled, putting her arm around him.

“Now I need to taste you…” he said, putting his fingers in his mouth.

“Make up your mind!” Yvette smiled.

Yvette did as she was told, and his tongue soon replaced his fingers, darting in and out of her snatch which clenched deliciously in response.

It was weeks later, after his first taste of Yvette, and he did not walk past the bookstore anymore. He walked in, to pick up Yvette. Today, she stood at the register, and smiled when he walked in.

“Are you ready?” he gesticulated strongly.

“Mmmm, not just yet.”
Cole loved how her eyes closed to slits behind her thick frames, and he watched her as he moved his hands like a magician. Because he was the magician of her orgasm.

It was clear that the remote-controlled ben wa balls he had bought her gave her intense pleasure. He raised his hand up, over his head, along his chest and then thrust out as if he held a lasso.

“Excuse me, can I still purchase this book?”

They both looked up at the customer who had appeared out of nowhere.

Yvette closed her mouth, not completely and nodded. Cole waved his hand at her, and he saw the wave of pleasure go through her body. Then he stopped playing with her, and watched his shop girl in action.