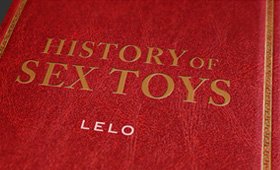 Believe it or not, sex toys are as old as the Stone Age – literally. In fact, archaeologists recently uncovered an 8-inch siltstone phallus tucked away in an ancient German cave that dates all the way back to 28,000 BC.

Sex toys have certainly come a long way since the days of Fred and Wilma. We’ve progressed from siltstone to silicone; bee powered (more on that in a sec) to battery powered and beyond.

And as we get underway in celebrating our own storied past, it just wouldn’t be appropriate to overlook the passion pioneers of yesteryear who have given us all the opportunity to pave a pleasurable path from you to ‘O.’

With cases of “female hysteria” on the rise in America, the demand for medical pelvic massage skyrockets. Fatigued by servicing female patients by hand all day, doctors are relieved by George Taylor’s Manipulator—a clunky steam-powered massage apparatus.

Now that you‘re caught up on pleasure’s past, we invite you to join us as we open a new, decade-long chapter of product innovation and sexual empowerment, sure to set the trends for sex toys of the future.