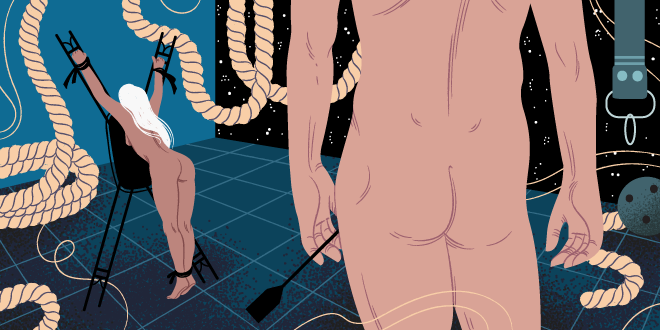 The following is an exclusive excerpt from Sophie Morgan’s New York Times Best-Selling novel ‘No Ordinary Love Story.’ Here, the best-selling author of ‘ Diary of a Submissive’ offers a very frank look at a full-time D/s relationship. Read here for an interview with the author.

My heart began to pound as I saw the scene in front of me. The St Andrew’s Cross had been moved to the centre of the room and next to it was his crop. Seeing it surprised me – when he’d arrived with two bags I’d assumed he’d brought something else because I knew the crop wouldn’t fit in either of them. He must have hidden it somewhere in the car and retrieved it later. Shit. I stole a glance at his face. There was no humour in his eyes, just a stern, assessing gaze, as if he was measuring me for something. Fleetingly I wondered, worried, if I was going to be found wanting. It had been a long time since I’d been really hurt. Adam was much more about psychology and humiliation rather than pain. He had only used the crop on me briefly once before and spanked me a few times, although he joked that his hand got tired before I got too uncomfortable, my reputation as a pain slut apparently still intact. He turned me around to face the cross, using cuffs to fasten me in position at the wrists and ankles, leaving my arms and legs spread open.

I was trying to prepare myself for the pain, aware that if he wanted to do more than a peremptory few swats this was going to hurt. He was taking his time, though. He ran the end of his crop up and down my back and between my legs, chuckling as I flinched. He left the crop there for a few terrifying seconds, my thigh muscles trembling as I fought to close my legs. I couldn’t, of course. Trust me: at that moment if I could have I would have. He pulled the crop back. ‘Your juices are sticking to it. Well, I guess that answers the question about how much you enjoyed the pillory and the cage.’ I flushed. He was right. In another context (probably later, with tea and a biscuit) I’d be able to admit what we both already knew, that being treated this way, hurt, humiliated, locked up, was making me incredibly turned on.

We’d even be able to talk rationally about what felt most hot, most challenging. But not now. Right now, listing to his stern and imperious voice, I was embarrassed, shy and oddly furious at how gleeful he was at how wet this was making me. Even though I was wet, and we were both enjoying it, I felt the need to lash out a little.

Turns out it wasn’t me that was going to be doing the lashing.

‘You’re going to count down from fifty.’ 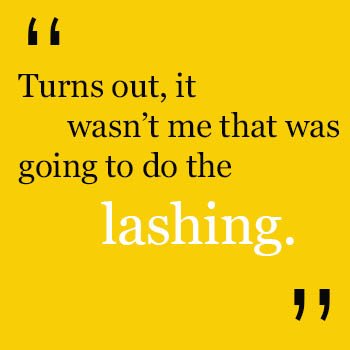 What? Shit. The terror started then. The crop produced an intense pain – he had only used it on me once before, and I’d not taken anything like fifty strikes from it. I wasn’t sure how I could. Maybe it was just as well the cuffs were holding my ankles in place. Then I felt a few seconds of wild optimism. Maybe he meant he wanted me to count down to fifty before he started cropping me, maybe he was messing with my mind, building the anticip–

The first strike hit my arse. Fuck. OK. The adrenaline started again. Fine. Let’s do this.

The first ten stung a bit, but he was clearly holding back. I began to think I could maybe endure this, if this was the level he was going to keep it at. Of course he wasn’t. Even I think I’m an idiot in hindsight, but clearly I’m an optimist at heart.

The next ten actively hurt.

The five after that made me cry out.

The next five made me cry, tears streaming down my face in a way which, I realised later, just made my face look more of a mess, although at the time I didn’t have the capacity to be aware of it in my struggle to cope with the strikes. The final twenty were a huge challenge. He hit harder and harder, the sound of the crop whistling through the air in a way that filled me with fear. My arse and thighs were on fire, and when I didn’t say the numbers fast enough between soft sobs he would make me count them again. And again if need be. By the time he finally finished I had probably been hit more like seventy times.

When I finally reached number one, my body shook with relief. Adam quickly freed me from the cross and eased me down onto the floor, so that I avoided sitting on my burning bum. He sat with me, my head in his lap as he stroked my hair, letting the reaction move through me like a tropical rainstorm both in its intensity and the speed with which it passed.

He whispered into my ear as I got my breath back, his voice calming. He told me how wonderful I was, how pleased he was with me for enduring the crop so beautifully for him. How lovely the marks on my arse looked. How proud he was of me. How impressed at my bravery. His words warmed me, soothed me, as did the endorphins running through my body and my relief at having not just endured for him but done well. My breathing slowed. I calmed down. And suddenly I was just a very dishevelled-looking woman with a pleasingly warm arse and an incredibly wet cunt. 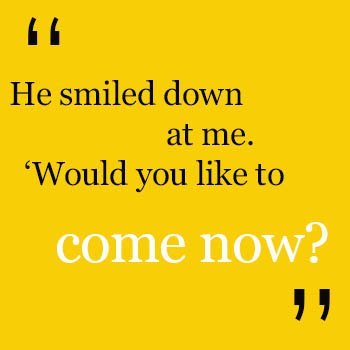 He smiled down at me. ‘ Would you like to come now?’

I nodded quickly, feeling myself flush a little at my eagerness. ‘Yes please.’ Gently he helped me up. He took my hand and led me back upstairs to the bedroom. He pulled me down onto the bed, kissing me passionately. Our tongues tangled, our hands were everywhere. The dynamic had changed to something more playful. This was

Adam as I knew him most often: still with moments of danger, but mostly lovely, sensual. Loving. He pulled away for a moment to smile down at me and I saw the redness around his lips and remembered the lipstick on my face.

I’d always thought mirrors were a bit too Playboy Mansion for my taste, but in this room they gave almost a 360 ° view of everything, which I liked, although it made it difficult to ignore the things that I found challenging (my possibly stained forehead), at least until I began to watch Adam strip in the mirror. He was finally taking off his clothes and giving me an unimpeded view of his hard cock, and then his arse as he leaned down to retrieve a condom from his bag. When he was finally naked and ready he moved me onto my hands and knees and slid inside me from behind. 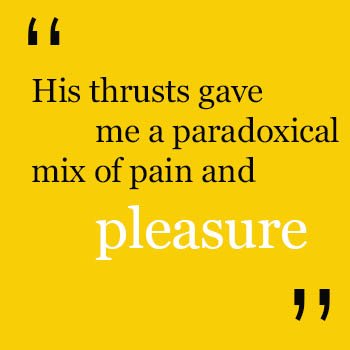 I let out a long groan of pleasure as he began to roughly fuck me – after so much teasing and so many intense experiences in such a relatively short length of time I was more than ready for this. He grabbed a handful of my hair and began to use it as leverage, pulling me back onto him as fast as he pushed into me. His thrusts gave me a paradoxical mix of pain and pleasure. My arse and thighs were still stinging from the crop, and feeling him bash against them with every movement brought new waves of searing heat from the welts, but that was paired with the pleasure of feeling him inside me. It felt amazing. His hands pulled my head up and made me arch my back, which meant I could see my own face in the mirror again. I flushed at the wanton, dishevelled mess he had rendered me, shocked at the lust in my eyes and the smile of joy on my face. My expression brought me up short for a moment; it was a rare visual insight into how I looked during my own submission. I was surprised by how happy I looked – no grumpy face here – and also how I seemed younger and more carefree somehow.

I was suddenly dragged back into the moment by the movement behind me. My eyes flickered to Adam, my tormentor, my partner in crime, the man who had very quietly done everything he could to fulfill lots of my longest-held fantasies. I watched him as we fucked, enjoying the look of concentration and lust in his eyes as I felt him slide in and out of me. After a while he pulled out, maneuvering me across the bed onto my back before beginning to fuck me again. His weight pressing my arse into the sheets, the welts rubbing across the soft cotton as we moved, made for even more pain, but by that point I didn’t care – I was concentrating on looking over his shoulder in the mirror, watching him push in and out of me, seeing the point where we were joined so intimately.

The combination of the pain, the pleasure and the voyeuristic feeling of watching ourselves in mirrors meant I was so close to orgasm that my thighs were shaking with the effort of fending it off. In my submissive headspace it felt, more than ever, like something I should ask for. I did so, my voice sounding desperate even to my own ears, my relief when he said ‘of course’ almost a tangible thing.

I came. Hard. Once I had stopped trembling he climbed off me and lay on his back next to me on the bed while I recovered, his hand stroking my arm, creating a moment of connection that helped finally ground me, bringing me back down to earth. When my breathing finally stilled I turned to crawl into his arms, but as I did so I saw his cock, hard and covered in my juices. I know he’d taken his pleasure and left me unsatisfied in the cage, but I clearly was a nicer person than him and didn’t want to see him denied. OK , mostly his cock looked tempting and I really wanted him to come in my mouth – I’m not that selfless. I looked over, to check he had no more plans for now and wasn’t going to stop me. He smiled, and put his hands behind his head, a silent indication that he wasn’t going to interrupt me now.

It was my turn to play.