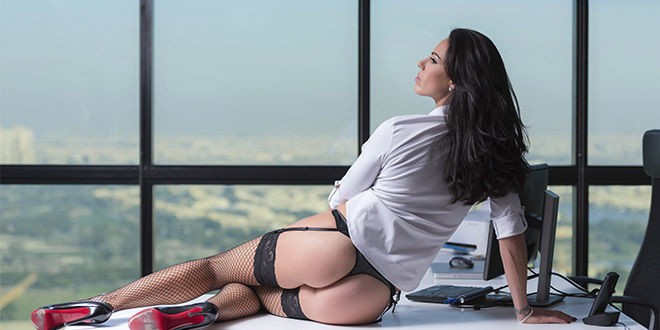 Cami opened her eyes, yawned, stretched and padded into the bathroom to start her day. Ross had already left for work and since she had the day off, a leisurely shower was first on her list.  The combination of the rain shower and jets of water pummeling her body in just the right places turned her on. Her thoughts went to Ross and soon she was caressing her body. Cami pleasured herself slowly and sensuously, crying out as the intense orgasm hit her body.

After the shower, Cami went to her closet and just as she was reaching for her favorite pair of worn jeans, she had an idea.  “Brilliant!” She smiled to herself as she reached for a crisp, semi-sheer white blouse, black pencil skirt and black heels. She walked to the dresser and pulled out a sexy black lacy bra, matching thong, a garter belt and black seamed hose. “There! This should do it!” She mused to herself.

Cami took one last long look in the mirror… top three buttons undone… check.  Cleavage showing… check. Looking damn hot… oh yeah, check. She was ready. All the way to Ross’ office she thought about what she planned to do.  She had been teasing him for months, threatening to walk in the office and seduce him in front of everyone. She fantasized about it a lot. “Well, today is the day baby,” she said out loud as she pulled into the parking lot.

Exiting the elevator, Cami opened the door. When she saw all the cubicles where the service reps sat, she had a moment of fear. “I can do this” she whispered to herself nervously.  Ross’ glass enclosed office was across the room. She saw him sitting at his desk, on the phone. “Here goes…”

Cami slowly started walking down the aisle that led to his office.  Maybe it was their connection, maybe it was coincidence but at that exact moment, Ross looked up and saw her slowly striding his way.  He hung up the phone, stood up and walked to his door, leaning against the door jam. He lazily crossed his arms and smiled. Then his jaw dropped.

Without stopping, Cami started unbuttoning the rest of her blouse until it was fully open.  She let it drop to the floor. Her barely there lacy bra jutting her tits out. The service rep on the phone next to her coughed and then forgot about his client as he stared.  Next, she reached behind her and unzipped her skirt. It slid down and she stepped out of it, tossing it to another service rep who caught it… his mouth wide open but no sound coming out. By now, everyone was staring. But it was the shock and admiration on Ross’ face that put all her fears to rest.  She was just hgetting started.

As she moved closer, he looked her up and down… bra, panties, garter, hose, heels. She knew his cock was swelling even before she saw the growing bulge in his pants. You could hear a pin drop in the office. Unanswered phones were ringing, necks craning over the cubes. Cami giggled as she reached Ross. His assistant sat at her desk with her mouth agape. “Hold his calls please”, Cami told her sweetly, as she took his hand and led him into his office.  He closed his door behind them.

Because it was a glass office, if offered little privacy but it was quiet except for the music being piped in. She could, however, still hear the buzz from the employees outside his office, craning to get a glimpse.  Cami stood before Ross. She put her arms around his neck, leaned forward and nuzzled his ear. Cami used one leg to push his apart and then pressed her body against him. He groaned as his hands found her and moved seductively over her body.  He unsnapped her bra, it fell to the floor. Her hard nipples screamed for attention which he willingly gave. Ross bent down and sucked them one at a time causing Cami to throw back her head and squeal in delight. She reached down and undid his belt buckle, thrusting her hand down his jeans and grabbing his hard swollen cock.

While she stroked him, Ross undid his jeans and let them fall to the floor next to her bra.  Cami slid down to her knees and took his cock in her mouth. Ross was vaguely aware of the curious eyes staring into the office.  His focus was on this sexual tigress in front of him. OMG, she could give head, he thought to himself with delight. As she touched him, licked him and sucked him, he ran his fingers through her long blonde hair and used every ounce of will power he had not to cum… right then, right there.  Cami was driving him wild. The way she flicked that tongue, teasing his cock, her lips closing around him pulling him deeper and deeper down her throat.