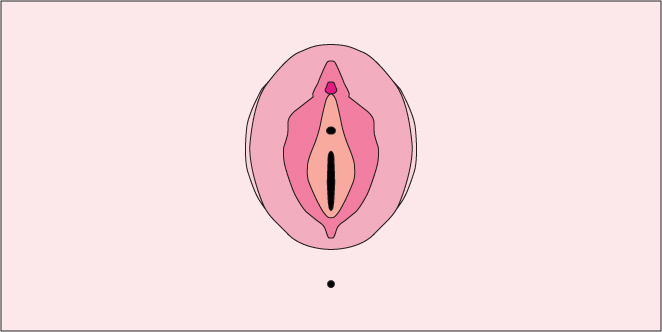 If you follow this blog, you likely have already seen the wonderful pieces on the vagina vs. the vulva and/or on the clitoris. But I want to talk more about female genital anatomy, or the whole hooha in the all-together – clitoris, vulva, vagina, and linked uterus -, and about how that anatomy corresponds with sexual pleasure.

Female genital anatomy is fascinating. Not only is it amazingly cool and complex, but the history of understanding it is crazy. In ancient Greece, it was believed that the uterus, or “hystera”, could take off and run rogue throughout the body, causing a woman to be overly emotional.  This is the origin of the word “hysteria”. Remarkably, though, while it has been about 400 years since the sedentary nature of the uterus has been understood, it has only been 22 years since the clitoris was. It was 1998 that Helen O’Connell published a paper detailing the full extent of the clitoral erectile network.  And even now, this information still isn’t common knowledge. So read on and let’s start to change that.

Imagine you are looking at a woman lying on her back, or better yet, if you have female anatomy and have never gotten up close and personal with it, lie on your own back naked, with a hand mirror. I will walk you through what you are seeing. I will also include the medical names in italics, but feel free to ignore them.

From the top, first is the pubic mound, or mons pubis, this is the ridge of bone at the base of your abdomen. For some women, it’s covered with hair. Others prefer to be hair free. Whichever way, the pubic mound can be fun. Pressing on it or tugging the skin slightly up during genital stimulation can increase sensation. And that’s because of what is attached to it and lies below it – the vulva.

The vulva is the outside part of the female genitalia, which is definitively NOT the vagina. The vulva extends from the pubic bone down to the skin above the anus and is made up of lots of parts. First are the outer lips, or labia majora. When hair is there, it covers the pubic mound and the outer sides of the lips. Inside of these are another set, the inner lips or labia minora. Both of these lips come in a magnificent rainbow range of colors, from the darkest purply browns to the rosiest of red pinks and the palest of tans. They also vary extensively in size and shape, from tiny, tucked-up, barely-there bumps to extensively unfurling, decorative draperies. The outer may be longer than the inner, or the reverse can be true. Both sets of lips may swell and become darker during arousal. Each and every one of these variations is normal and sexy and a vulva will likely be more than one of these throughout life. But let’s take a closer look.

The lips all converge at the bottom in more or less of a V-shape, the labial frenulum. Yes, while you may associate the frenulum with the penis (sometimes referred to as the “banjo string”), women have one too. And just like the frenulum of the penis, the labial frenulum can provide extra pleasure when stimulated. Below the frenulum is the perineum (sometimes referred to as the taint, ‘cause “it-ain’t” the vulva or the anus) and then the anus (which has more common names than I have space for).

But back to the vulva: if you delicately part the lips, you will notice two openings. The lower, likely slightly larger one is to the vagina, or vaginal introitus (and yes, only that part is the vagina). The vagina is just a stretchy muscle tube that connects the uterus to the outside world, about 3 inches long. It is designed to stretch and shrink back. It cannot become “loose”, though the strength of contraction can be increased with exercise as it is still muscle. And like the lips, there is an extremely wide range of normal for vaginas in color, shape, or size. But none of that determines how well a vagina works: that is – its ability to provide pleasure for its owner and for whomever else it may be shared with. But it’s kinda cool to know that with arousal, the vagina elongates to about 4.5 inches and that the majority of the nerve endings in it are within the bottom 1/3, or the first inch or so. This means the most intense vaginal stimulation for many women is near the entrance and may not be dependent on deep penetration. But for other women, deep penetration pleasurably stimulates the internal end of the vagina, the fornix, or the cervix, the part of the uterus that sits at the top of the vagina.

Back to the external- above the vagina is a slightly smaller opening, the urethra, where pee comes out. Many find this is an area to be careful of (if not avoided) during sexual stimulation. But that, too is completely individual, so feel free to explore, yourself, or ask your partner what they prefer. But please remember that inserting objects in the urethra may be dangerous and at least they need to be sterile, as the urinary tract cannot protect itself against infection like the vagina.

Now let’s look at arguably the most important sexual part of the female genitalia, the clitoris. The clitoris is the only organ in the human body that, as far as we know, is solely devoted to pleasure. You may know the clitoris as the nub of extra sensitive tissue at the top of the vulva, nestled under a hood, or clitoral hood, that forms from the top of the inner lips. Stimulating the clitoris is an extremely important part of sexual play. In fact, the majority of those with clitorises, or clitorides, self-pleasure mostly through clitoral stimulation, and upwards of 75% need direct clitoral stimulation to orgasm at all. Just like the rest of the genitalia, the clitoris comes in a variety of styles, from tiny to large, shy to bold, and in any one of the colors of the vulva, or even it’s own distinct tone. And, again, these are all normal. But the little nub is only the tip of the iceberg.

Technically, that nub is the head or glans of the clitoris. Which, while being the most sensitive part, is not the only one. The clitoris runs up to the pubic mound from the head of the clitoris under the hood as a tubular ridge, called the body of the clitoris. Many clitoris owners really enjoy stimulation there, sometimes more than directly to the head. But the clitoris continues, curving in and back down to snugly hug all the other structures of the vulva from within. The body of the clitoris divides just above the urethra into 4 pieces. These are 2 big plump, eggplant shaped clitoral bulbs, which nestle around the urethra and top and side portions of the vagina, just under the inner lips and a bit of the outer lips, and 2 long spindly legs or crus, which lie outside of the bulbs, mostly under the outer lips. The entirety of the clitoris is erectile tissue and operates the same way the erectile tissue of the penis does: with arousal, blood flows in causing the tissue to swell. This swelling pushes against the urethra (where another little bit of erectile tissue, the urethral sponge, helps to close off the urethra when aroused) and against the walls of the vagina. The most recent research supports that it is stimulation of this internal clitoris through the pressure on the lips and from inside the vagina that causes “vaginal” orgasm, and that the part of the clitoris near the top and side walls of the vagina and the urethral sponge may actually be the area of pleasure which is commonly referred to as the “g-spot”.

There you have it.  The female genitalia. Multi-pieced, complex, variable, but always sexy, and extremely important to know about. Because knowledge is power: because naming provides acknowledgment and acceptance, because you can better explore all the parts and pinpoint where sensations are occurring, and because you can better describe where and how to stimulate the female genitalia to obtain or provide the pleasure it was designed for. So now that you know, go forth and share this knowledge with your friends! With your partners! And, most importantly, make sure each and every one of those bits is pleased to the nth degree!