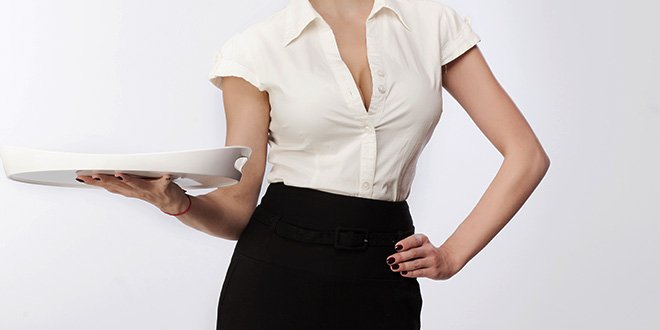 Jonah’s coffee was cold; he had purposely lingered with it so the waitress would walk back over. He had been coming to this cafe for years, but Lala was a new addition.

She was gorgeous in a retro way, with unbelievable curves a lá Joan Holloway on Mad Men. Her bust was such that he almost hoped that one day; her blouse would pop its buttons. The suggestion of her cleavage that he could see was not nearly enough.

Lala sauntered over to him, and leaned over him as she poured his coffee. Jonah almost swooned; he could smell the perfume from her between her breasts as she poured.

‘Lala? Can you come over here for a second?’
Lala smiled at him, and then walked away toward the only other waitress working. He watched her broad hips sway as she did.

The other waitress stared at intently her as well. Deborah was a relatively new addition to the cafe as well. She was also very lovely and very voluptuous but she was not as nice as Lala. He started sipping his lukewarm coffee, and watched Lala and Deborah whisper quietly, both of them finally going to the back and he wondered what was wrong. The other customer drank her coffee in a rush and walked out of the cafe, leaving a tip in the large jar by the till, leaving him as the only person sitting there. He powered down his laptop, pushed his lukewarm coffee away, and got up to go to the bathroom.

Pushing past through the curtains, he heard moaning. Unsure where it was coming from, he wandered curiously in direction of the sound.

The bathroom door was not closed completely—it never closed well. The moaning became even louder, and as he peeked through the crack of the door, finally he no longer had to wish that Lala’s blouse would burst open.

Lala was kneeling naked on the floor, caressing her own breast, while she lapped like a delicate kitten at Deborah’s clit. Deborah sat on the toilet, pulling Lala’s head closer to her.

‘You think this is going to make up for pushing your tits in that customer’s face?’ Deborah asked Lala, pulling her head back by her hair and undoing Lala’s messy bun. Lala’s hair fell over her shoulders.

‘Oh Debbie, I was just pouring him coffee…I was not even thinking about anything else. And Jonah is nice…’

Jonah froze in his tracks like a deer caught in the highlights and he heard his name and saw that Deborah was now looking directly at him, her mouth jarred open.

‘Well he comes here all the time and I talk to him. He is a writer and very nice. I can be nice to people. Besides you know I like what you’ve got…’

Deborah smiled like the Cheshire cat, as she and Jonah realized that Lala did not realize that Deborah was exposing him when she called his name. All Jonah could see were Lala’s curves slide up and down between Deborah’s legs.

He had never spent much time imagining Deborah undressed before, but here she was with her pants pulled down and her legs spread as wide as she could. Her body arched up as she bucked up against Lala’s face, her own full breasts bobbing with her movement.

Jonah wanted to move away but he could not. It was a fantasy he hadn’t get imagined, yet now it was playing out in front of him.

Deborah held his gaze as she continued arching up and down. He watched Lala’s long hair sway back and forth, almost touching the tips of her heels when she threw her head back.

Finally forcing himself to look away, Jonah slouched against the doorjamb. The pressure to go the bathroom, on top of his very stiff erection, almost made it hard for him to move.

He barely made it into the bathroom, his shaft already in his hands. One inadvertent stroke and he practically came. Jonah stroked purposefully now. He surfed his mental catalog of the images he had just seen. Deborah, legs spread getting head from Lala. Lala completely naked from behind, and the sound of her voice so soft and lovely.

The sound of Deborah coming came through the bathroom louder than it should have. He heard Lala shushing her, and then it was completely quiet.

He was rough on himself as everything came at him violently. The sharp mental images of all he had just seen and the sound of heels going further away from him. It was then that he let himself go all the way; coming with a whimper that came from deep within him and nearly brought tears come to his eyes.

Jonah washed up a bit, and looked at his face in the mirror before he was ready to go back to his table.

Lala walked over to him, and he looked away, only to catch Deborah’s quiet smirk before she looked back down at the counter. Lala poured his coffee from a distance this time, but she smiled at him brightly. He smiled at her awkwardly, making her raise an eyebrow.

Jonah wondered if she knew.

Now when he looked at Deborah and Lala, he saw the things he had never noticed before when he was too busy looking at Lala, the way the smiled at each other and left lingering touches on each other’s arms and backs. He still could not keep his eyes off of her, and was happy that she was nice to him because he was nice to her.

This time, he smiled at her brightly, and nodded at Deborah as he picked up his suit jacket and made his way out of the diner, leaving a big tip in their tip jar as he did.