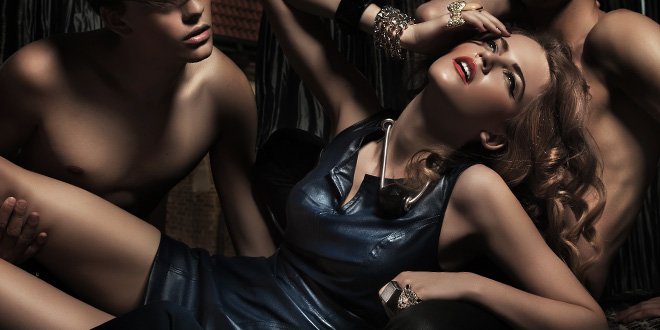 Simon pressed his thigh against Clark’s. He liked being close to Clark when he wasn’t paying attention to him. Clark was busy smiling at Beth, who had just come back from London on business. They were waiting to be seated at the bar. Beth stirred her gin and tonic, oblivious to the way Clark looked at her.

But Simon was not.

Earlier that day, he had teased Clark that he was ‘going to see his girlfriend’ that night.

“Beth is just a friend…” Clark had said.

Clark hadn’t met his eyes, but Simon caressed the inside of his boyfriend’s wrist.

Simon knew when they got together that Clark was bisexual, and he was okay with it. Clark was the closest that he had ever come to being monogamous—well, he was monogamous now—but he was open to whatever might happen with them…

Then Clark had looked at him and held his gaze for a long, silent moment.

“No, you talk about her like a teenager! Why don’t we invite her to bed with us?”

“Are you serious?”
“I wouldn’t mind, and looking at her…I don’t think she’d mind either…”
Now, Clark watched as Beth took a tiny sip of her gin and tonic and Simon got up to put his hand on the small of her back.

“Our seats are ready…” Simon whispered to Beth. He felt the tension in her body when he caressed the small of her back. She turned to look at him, and he saw for the first time that she might have liked him as much as he thought she liked Clark. Well, she had said that they were the most gorgeous companions that she had ever had, but Simon figured that the attention had all been directed at Clark.

It felt different when it seemed like she was attracted to him as well.

Clark stood and held out his hand out to Beth, leading her over to their table. Beth sat down and the moonlight poured over her as she looked at them seated across from her.

Simon took a sip of wine, and wondered if she would prefer their bed if offered.

“I love London too; I haven’t been home for a long time though…” Simon said.

“I do, but Clark is here and he’s my family so New York feels like home too.” He put his hand on Clark’s thigh under the table, and Clark placed his hand on top of his.

“You are such a gorgeous couple…” Beth said, taking another sip of her own drink.

Silence fell over the table; not out of awkwardness but simply because the food at their favorite restaurant was that good. Throughout the meal, Simon shot lingering looks over at Beth and she returned them. She would smile, play with her hair and look away.

When dessert was served, they shared a decadent chocolate cake. Playfully, he and Clark took turns feeding her, and with every bite she took looked like she was about to come. Simon could only imagine what was going on in her mind.

“Excuse us?” he said, getting up and taking Clark’s hand.

Beth nodded, and took the fork to take another sensually slow bite.

In the men’s room, Simon pulled Clark into a stall. He pressed him up against the door and kissed him, rubbing his cheek against Clark’s to feel the burn from his stubble that he loved. Clark was panting as he pulled away.

“I think we’re going to take her home tonight. Do you want to?” Simon asked.
Clark closed his mouth, and looked at him.

“I knew you were up to something. You paid so much attention to Beth…”
“I think she is up for it!”

“And what if she isn’t?”
“You are going to get lucky tonight anyway you look at it.”

He kissed Clark again, and caressed the small of his back. Then they walked out of the stall holding hands and returned to the table to see Beth putting on her fur coat and looking up at the expectantly.

Clark picked up his card and his receipt while Simon got Beth’s luggage from coat check. Piling into the backseat of the Clark’s company car, each took a seat on either side of her and Clark put his hand on her lap.

“Beth, I am not even sure how to ask you this but,” Clark started. “Simon and I aren’t ready for the night to end. We want you to come home with us…”

“Sure!” Beth said. “It’ll be like a slumber party, and we can watch old movies and eat some of the gourmet goodies you guys keep in the fridge. I haven’t done any shopping…”

Simon laughed, and Beth looked at him questioningly.

“I like you, Beth. I tried to deny it, but Simon saw it in my eyes, and he asked me to invite you to join us…in bed…”

“Was that why you were flirting with me at dinner?” Beth asked Simon, smiling shyly.

Simon nodded, squeezing her thigh, and she moaned. Beth put her hand on his and moved her hand up higher on his thigh. Clark moved closer to her, putting his own hand on her thigh and Beth purred, swinging her leg over his. Simon caressed her backside, and pressed himself against her back.

They mirrored these positions in bed. Beth had her leg over Clark’s, and Simon caressed her bare bottom. She rubbed herself against his hand, and she buried her face in Clark’s chest. Clark lifted her up onto his chest, and rubbed his face against hers before they kissed.

Simon loved the sight of Clark kissing Beth more than he thought he could; watching as Clark caressed her with his mouth and the way Beth responded to every touch. He moved closer against Clark to watch her delighted face.

Then Beth touched him, stroking his shaft even as she mounted and began to ride Clark. Simon gasped in surprise and pleasure. He had imagined just watching, but Beth touching him made him desire more. She squeezed him in a rhythm that matched Clark’s hips as they bucked up under her.

Watching as she pleasured him while fucking Clark, hearing the mix of their moans now in unison; it was all too good for him, and he came quicker than he had planned to in a long shuddering orgasm.

Barely slowing, Beth turned around on top of Clark, and bent forward so she could kiss Simon’s thigh. Simon caressed her hard nipples as Clark began spanking her. Crying out, Beth came hard, quivering atop Clark in an orgasm that didn’t seem to end. Simon caressed her leg to soothe her even though he needed soothing himself; his heart still racing from the orgasm she gave him.

Soon, they were lying in a breathless pile of limbs. Simon reached out for Clark, as Beth said aloud, “That was like a dream…”

She turned on her side and kissed Clark. Clark smiled and kissed her for a long time before he turned to Simon.

“Thank you baby,” Clark mouthed, before he kissed him.

Simon almost swooned, and sucked on Clark’s lower lip as they drifted to sleep. 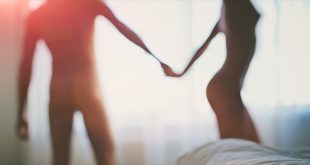