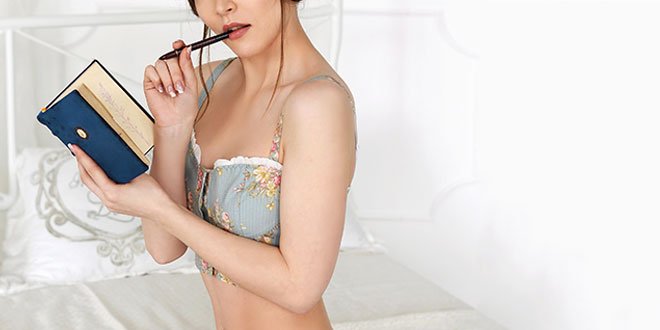 We were very pleased to speak with Gabrielle Lichterman, founder of Hormonology, author of 28 Days: What Your Cycle Reveals about Your Love Life, Moods and Potential, and creator of the Hormone Horoscope and Female Forecaster apps to discuss what role hormones play in our day to day life―and in our bedroom.

Volonté: How did you begin studying female hormonal cycles?

[related_article id=”3275″ float=”right” target=”_blank”]This was revelatory. Up until this point, women had largely been told that our hormones impacted us only during our period or pre-menstrually. And, even then it was mostly in a negative way. This study showed that hormones had a much wider—and unexpected—impact on women.

But, as surprising as this hormone study was, I had a hunch that there were more just like it buried in medical journals that simply weren’t being reported on. So, I went in search of them. And, over the course of several months, I found hundreds. And they showed how women’s estrogen, testosterone and progesterone impact not just our moods, but our energy, libido, extroversion, confidence, chattiness, memory, sleep, how we spend our money, our health and so much more.

Then I focused on seeking out research about the male hormone cycle and found studies that show it, too, impacts men’s moods, energy, libido and more.

V:Can you briefly outline the hormones that fluctuate during a monthly cycle?

GL:Estrogen rises throughout the first half of a woman’s cycle, then dips sharply right after ovulation, rises once more a few days later, then dips again during the premenstrual week.

Testosterone is secreted in a steady, low amount throughout most of the cycle except during ovulation when it spikes slightly.

Progesterone starts to climb at ovulation and its level rises to its peak 8 days later, then it descends during the premenstrual week.

V: How do they affect things like our sex drive?

GL: Estrogen and testosterone are key hormones that impact libido in women. As estrogen climbs throughout the first half of a woman’s cycle, she has more frequent sexual fantasies, experiences a higher sex drive, finds it easier to orgasm and her orgasms become more intense. When testosterone rises, it enhances all of these effects.

In the eight days after ovulation, it’s normal to experience a lull in libido. This is due to a combination of plunging estrogen and testosterone and rising progesterone, which is a hormone that dampens sexual desire and makes it more difficult to achieve orgasm.

[related_article id=”8431″ float=”right” target=”_blank”]During the premenstrual week, many women experience a rise in sex drive once again. Experts believe this isn’t due to hormones, but instead due to nerve endings in genitals getting stimulated as the body prepares for menstruation

Knowing when the female sex drive is normally high and when it’s normally low in a woman’s monthly cycle is important because it serves as a baseline so that women can detect when something isn’t normal. For instance, if a woman is not experiencing a hormone-fueled rise in her sex drive during the first half of her cycle or is having difficulty reaching climax on these days—and she doesn’t have a disorder known for sapping libido, such as thyroid issues, and she’s not taking a medication that interferes with sexual function, such as antidepressants—then she knows something is out of sync.

Even though the pre-menopausal years are supposed to be a time when a woman’s sexual health peaks, research shows that at some point 40% to 50% of women struggle with sexual issues during this phase of life.

V: Are we at the mercy of our hormone fluctuations then?

[related_article id=”5309″ float=”right” target=”_blank”]GL: You’re only at the mercy of your hormones when you don’t know how your hormones are impacting you.

Once you realize how your hormones impact your mood, health and behavior, you become the one control. You can identify when your hormones are having an influence on you (for instance, when they’re pushing you to flirt with someone who isn’t your current partner or to buy a very expensive designer handbag) and you can decide whether or not to follow through (for instance, you may decide not to flirt to avoid hurting your partner’s feelings or to step away from the checkout counter and not spend all your money on a handbag you don’t need).