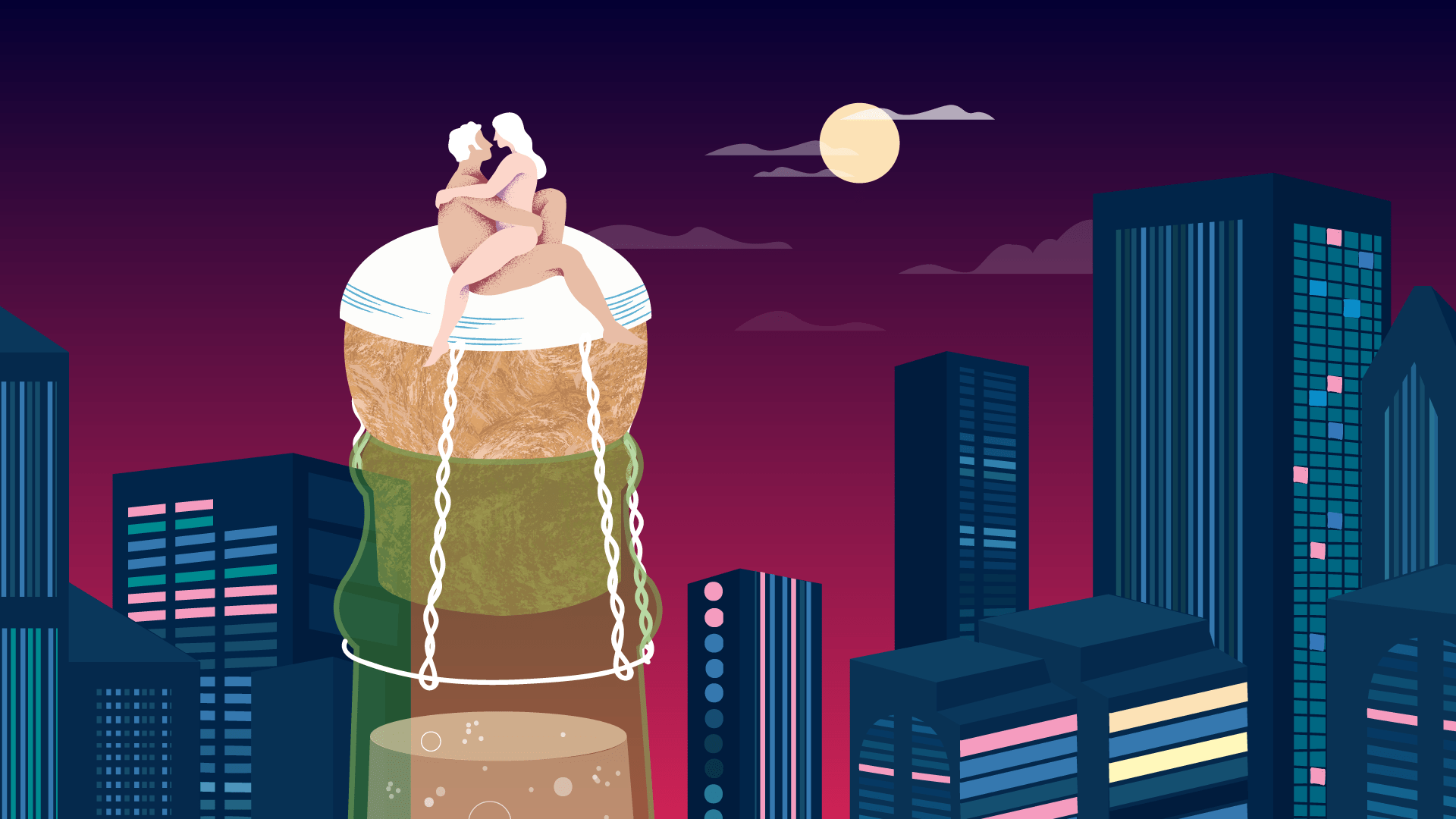 Poking her head into the corridor, she looked right and then let, trying to stifle a giggle.

‘Coast is clear!’ she hissed over her shoulder. Turning back to aim herself toward the elevators, she added ‘OK, I’ll go first and call the elevator and then…Ow!’

She yelped at the sudden bump that nearly sent her putting her sprawling onto the lushly patterned carpet. Straining against the doorframe to stop them both from toppling out, she looked back at Brian juggling a bottle of champagne, pillows and a blanket.

She stuck her head back out into the hallway, took a deep breath and then strode out with false briskness. With 10 long steps she arrived at the elevators and pressed the ‘Up’ button with 3 quick jabs of her thumb. At nearly midnight, most of the other guests were already in bed or not due in for a few more hours, but she was still hoping there wouldn’t be any staff or too-drunk college kids on spring break headed to their floor.

With a cheerful ding, the elevator arrived, and she stepped in backward, giving a quick whistle back up the hallway toward their room.

Impatiently, she whistled again and listened. There was the click and mechanical whirr of the door shutting, followed by muted thumps of Brian’s steps toward her.

He slowed his steps to a nonchalant stroll as he crossed the tile before the elevators, giving her a serious nod before joining her.

‘So,’ he said mildly as he leaned against the back wall, ‘Are you here for the life insurance conference, Miss…?’

Laughing, she stood on her tip toes to kiss his neck. ‘Caroline. And no, actually. I’m here for my anniversary. But my husband seems to have abandoned me.’

‘Oh well he sounds awful. Look, if you’ve given up looking for him, I was just about to enjoy this champagne up on the roof if you’d care to join?’

They both grinned at each other as she clasped his hand and nodded. With a ding, the elevator stopped on the 20th floor, and, putting a finger to her lips, she cautiously looked out into the corridor.

The floor was dark, the gym and small pool that made up the floor having long since closed for the evening and the pale moonlight casting bizarre shadows through the glass enclosing them.

They crept past, Brian copying Caroline’s exaggerated tip toe as best he could with the large bundle in his arms. At the end, behind the fitness welcome desk, they came to a door marked ROOF ACCESS that, though appearing closed, had a folded up brochure tucked into between the frame and locking mechanism.

Pushing the door open silently, she held it open with her arm and bowed, ‘After you, my good sir.’

‘Why, thank you kindly,’ he replied.

They crept up the steps to another door, this one propped open with some sort of insurance booklet.

‘Wait, there really is an insurance confere..?’

‘Shhh, come here!’ Caroline pushed past him and kicked off her shoes, not bothering to pick them up as she made her way to the edge of the roof.

Brian followed, suddenly transfixed by the sight of her curvy silhouette against the city glow. She was pushing herself up with her elbows on the ledge, face thrust excitedly into the cool night air, just as she had the very first time, and now in the 10 years since.

Depositing bedding on the ground, he walked up and put his arm around her stomach, nuzzling the back of her neck.

‘So beautiful,’ she breathed.

Caroline turned around to face him, rolling her eyes. ‘You make that joke every time.’

‘And I still mean it. Even when you roll your eyes around like that. But now that I’ve torn your eyes away from the beautiful night sky, may I interest the lady in some champagne?’

She tucked her fingers into the front of his pants, admiring his strong jaw line as wrestled the cork from the bottle. Even if she always managed to open them more easily, it was all about these little traditions.

With a final squeak and a pop, he tossed the cork aside and gave her his best Sean Connery eyebrow raise. ‘I seem to have forgotten the glasses, my dear girl. You’ll have to open wide.’

She closed her eyes and lifted her open mouth expectantly, bracing for the sharp sweet tang of the bubbles in her mouth.

Instead, a few drops hit her lips while a steady stream hit her chin and ran down her chest, soaking the top of her blouse.

‘Brian!’ she gasped, forgetting for a moment to whisper.

‘On it, miss. Many apologies; can’t imagine how that happened.’ Without missing a beat he began unbuttoning her shirt and noisily kissing and licking his way from her collarbone to her sternum. All the way down he followed the middle of her petite frame, now shaking with laughter, until he was on his knees at her feet.

She clasped her hands behind his head and looked down into his large brown eyes, which looked more mischievous than usual.

‘Well jeez, now that I’m all wet,’ she began, bending―with just a little―to join him on the ground.

‘Wait just a sec.’ He reached among the blankets and pulled out a small black box. Placing the champagne down, he flicked open box and held it up for her. ‘I’ve got something I’d like to propose.’

In the poor light, all Caroline could see within the box was a thick gold band.

‘Brian, that’s not a ring is it? You remember that we’re married, right?’

‘While I would marry you again 50 times over, no, this isn’t a ring.’ He looked down and began fumbling with the box. ‘Just let me turn it on…’

He held it up triumphantly as it began buzzing. ‘Someone has been leaving their browser open. I can take a hint.’

‘I don’t know what you’re talking about,’ she started, pulling up her skirt.

‘Mhhmm, is that so? Hmmm’ he murmured, mouth muffled against her soft inner thigh. With both arms cupping the back of her legs, he continued to voice his disbelief; first along her left thigh, across her delicate cleft, and then back down the right.

Jutting his chin firmly under her, he looked up into her eyes, half closed with pleasure as she leant against the wall and held onto the back of his head with her other arm.

‘After thorough investigation, I have to find your claims of innocence to be completely spurious ma’am.’

‘Shhh. Shut up,’ she laughed and pushed his head gently back toward her. His tongue obliged, flat and pushing forward along her, then curling back as he pulled it upward to her clit. She shivered and placed a knee on his shoulder as he delved forward and back, each time pausing longer to suck gently as she moaned and squirmed in his grasp.

With the tapered edge of the toy, he began entering her shallowly, each time letting it linger for just a half second longer.

‘Please,’ she said, grasping at his hair with no longer gentle tugs.

Obliging, he bit gently at her thigh while inserting it and admired the glint of gold against her tawny skin. He stood, his fingers pressing it in place from within and watched as she writhed against the vibrations.

She pulled him close; leg lifting in his grasp to urge him deeper. With her other hand she fumbled around his to undo his belt, grimacing in frustration.

He chuckled and released her, undoing his belt slowly as she explored sensations of the toy against herself. She flicked her eyes at his cock, an invitation and a challenge. With a loose grip he ran his hand up and down his shaft, enjoying his show as much as being hers.

‘Turn around,’ his voice now hoarse with want rather than effort to be quiet.

She gave a slow, mocking turn and stuck her ass out at him, using her hand now to grind against the vibe with a slow, deliberately taunting.

He stepped toward her and lifted her hips, entering her so hurriedly he barely registering her deepened moan. Each thrust seemed to send shock waves down the underside of his cock and throughout his entire body. Their left arms intertwined on the top of the ledge, using it for leverage as their right hands both clasped at her cunt. Their ragged breaths were overpowering the sound of traffic from below, and Caroline’s moans seemed to envelope him in the sensation of her; it was impossible to recognize the existence of anything but himself within her…

‘Hey, are there people up there?’

They both froze, blood thundering in their ears at the sound of a strange voice from below.

‘I think there’re people fucking on the roof,’ came a second voice.

‘Probably just some college kids. You remember being that age.’

‘Well,’ she murmured back. ‘At our age, I think that calls for champagne.’