What Does it Mean to be Panromantic

LGBT. LGBTQ. LGBTQI. LGBTQIA+. As an out and proud member of the queer community, I relish each letter our little web of support brings to the table. Under such a big, welcoming archway of possibility, there are few things more beautiful than queers and our ability to meet one another exactly where we’re at. Most times, we’re all at our happiest when we embrace each other across the divide of our identities and really sink into the joy of truly knowing one another.

In our sex-obsessed world, romantic identities get swept into the corner and tossed in the back of the cupboard. Most of us would rather talk about sexuality instead. The truth is that our romantic feelings and sexuality aren’t always so tightly enmeshed. While both are vital and vibrant facets of ourselves, it turns out that sexual attraction and romantic attraction are two very different things.

Panromantic is an identity label people use to express that they’re emotionally attracted to people regardless of gender. A panromantic person feels those sweet, sweet butterflies regardless of the gender identity of the person they’re falling for – and much like the difference between pansexual and bisexual, a panromantic person’s butterflies feel the same no matter their partner’s presentation and identity.

Put another way, a panromantic person feels the exact same soft and mushy feeling eating dinner sitting across from their cis woman partner as they do holding hands with their transmasculine nonbinary beau. To a true panromantic, love is love is love – and for them, it’s all about the love, baby.

What is the panromantic flag?

Like most LGBTQ community identities, panromantic folks have their own flag to fly, unique to their specific community. Interestingly, this is one identity that actually has two flags. These two distinct panromantic flags are there for folks to choose from to best show their truest selves off to the world (or just, you know, to wear as a cape during Pride Month. You do you.). The first and most popular flag is a twist on the traditional pansexual flag, featuring a big heart in the center. The heart helps emphasize the romantic emphasis on their attraction, to distinguish it from a regular pansexual flag. 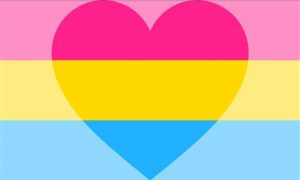 The second flag deviates from the pansexual one entirely, and is its own striped, four-colored flag whose four colors (blue, green, orange, and red), apparently represent individual identities panromantic folks are attracted to. According to the same Wikia page for panromantic attraction, the blue stripe is intended to signify romantic love for binary men, red for binary women, orange for genders both in between and beyond the binary, and green for gender-neutral or agender folks. 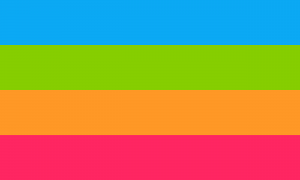 Although straight folks may not see the power of a pride flag (because let’s get real, theirs would just be stripes in different shades of khaki), those of us in the LGBTQ+ community know that having our own special way to show our truth to the world is what lends us power when the rest of the world refuses to see us in our entirety.

How is panromantic different from pansexual?

So panromantic has its own distinct flag from pansexual, but how different are these two identities really? As it turns out, there’s a whole lot going on that distinguishes the two identities from each other.

Although panromantic and pansexual may seem identical on the surface to an outsider, a closer look reveals the vital differences between the two.

Generally speaking, the definition of pansexual goes something like this:

Pansexual: (adj.) feeling sexual attraction to individuals regardless of gender

In contrast, panromantic’s definition goes a little more like this:

Panromantic: (adj.) feeling romantic attraction to individuals regardless of gender.

“Romantic” versus “sexual” is the key here – just like in the words themselves. Many people who are panromantic identify as such because their sexual feelings differ from their romantic ones. Importantly, people who identify primarily as panromantic do so because they choose to emphasize their personal relationship to romance rather than sex.

For a little more context, take the 1999 bi+ classic The Mummy as an example. A panromantic person would be inclined to go on a date with Evie or Rick (or Imhotep or Ardeth) based on their general vibe and personality, rather than taking their gender into consideration. Unlike biromantic people, whose style of romance may vary depending on who they’re feeling romantic about, (more on that difference in a little bit), panromantic people have identical romantic energy regardless of who they’re sitting across from at the candlelit table.

Their sexuality, though? Now that’s a completely different story.

The intersections of romantic identities

The best thing about humans, if you ask me, is just how varied and fun we are. Everyone is different, from the way we like to sleep to our favorite salad dressing – and nowhere is that more true than in our interpretations of intimacy, sex, and romance. We all love a little bit differently from each other.

And incorporating romantic identities is where the juicy world of sexuality gets even more dynamic. Although many people’s romantic and sexual modes align with one another, plenty of folks have distinct romantic and sexual intersections playing out within them at once. Returning to The Mummy just one more time, the panromantic individual may treat both Evie and Rick the same way while making googly eyes at them, but feel more submissive with Evie than they do with Rick.

That’s because, although a person may feel panromantically attracted to others, they could still have a more specific sexual preference. The combinations in this case are truly boundless, but here’s what some of these crossroads of sexuality and romanticism may look like in the wild:

For a panromantic and bisexual person, it’s only natural that their feelings will have a lot of clear overlap. However, it would be a mistake to look at those similarities and dismiss the two identities as one and the same.

To get a clear understand of why, it’s important to start at the foundation and realize that the term “bisexual” is not an enforcement of only two genders. Although it’s easy to write off the word “bi” as binary enforcing, the word “bisexual” goes well beyond that. As far back as 1990, the premier Bay Area magazine for the bi+ community Anything That Moves stressed that folks shouldn’t “assume that sexuality is binary…in fact, don’t assume that there are only two genders.”

In a nutshell, bisexual folks are attracted to both their own gender and other genders – and their attraction to each group is unique to that group.

Pansexual folks, on the other hand, don’t really factor gender into their attraction, feeling the vibes for someone without their gender impacting what that attraction looks like.

So, a panromantic and bisexual person may feel the same kind of romantic tingles for their date regardless of their date’s gender expression – but once it comes time to get hot and heavy, they may find themselves aroused differently, interacting with their sexuality in a different way, or feeling different and unique parameters for attraction.

For many panromantics, this duality is a common reality. A panromantic demisexual would be happy to get a thumping heart for anyone, regardless of gender – but for them, all their sexual attraction hinges on a sexual emotional connection.

Contrary to some people’s belief, demisexual folks aren’t necessarily asexual. In fact, many demisexual people have hearty sex drives, and oftentimes they regularly practice solo sex. For demisexual folks, though, an emotional bond is essential to feeling arousal for another person. These demisexual, panromantics also often feel that same romantic and sexual connection regardless of someone’s gender, just like pansexual folks do – but without that emotional boost, they won’t be taking those googly eyed feelings to the bedroom.

If you surf around the LGBTQ+ corners of the internet, I think you’d agree when I say that it seems like the most common sexual identity that intersects with panromantic is the asexual identity.

Rather than a fixed point of identity, asexuality is actually a lush and diverse spectrum. The asexual spectrum includes people who are completely averse to or repulsed by sex, folks who are happy to get sexual with themselves but are almost never attracted to other people, and those who are uninterested in sex but down to have sex with their romantic partners who are interested in it.

For many panromantic and asexual people, the gender of the person they love is unimportant at least in part because they’re not interested in sex, taking that facet of intimacy and putting it at the bottom of their priorities list.

However, if all these terms have taught us anything, it’s that things are seldom that clear cut. Many people feel adjacent to asexual – but not quite asexual – and identify instead as “greysexual.” People feel that they don’t quite fit into the asexual arena for many reasons. Perhaps they do get sexually attracted to folks, even if it’s rare or just a weak pulse of desire. Other times, a panromantic and greysexual person might feel sexual arousal, but only under certain sets of parameters. They may just feel detached from the notion of sexuality as a whole, but aren’t necessarily uninterested in sex.

Greysexual or asexual, wherever folks fall, many panromantic folks find that the asexual blanket nestles perfectly around them, too.

Contrary to what straight people would have you think, romance and sexuality are much harder to pin down than a single, fixed identity. Panromantic folks can identify with any sexual orientation under the big, beautiful rainbow – and any cross section of those feelings would be valid. In fact, because sexuality is an ever-evolving facet of ourselves, some people may use the term “panromantic” as they explore what their sexuality looks like, and to keep themselves open to their changing as they themselves change and grow.

Your identity is valid

The problem is that most folks aren’t taught to critically engage with their sexual orientation. But remember: you’re more than a fixed term. You are an abundant and fluid person, and no matter if you identify as panromantic and asexual or panromantic and just questioning everything sexually, your identity is a valid one. You are a welcome addition to the LGBTQ+ community and are queer enough.

Don’t let the straight people and queer gatekeepers get you down! Because we have a world of opportunities out there to choose from, and we recognize that our own personal relationships to sex and intimacy are always evolving, panromantic folks have a smorgasbord of possibility laid out before us. The sky’s the limit for love, baby, and we’re just sitting down to feast.

If you’re panromantic too, I’d love to hear your thoughts on how it interacts with your sexuality in the comments!