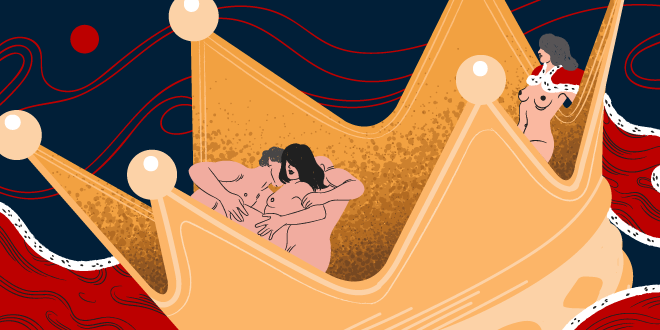 The Queen was standing robed in the middle of the greatroom, her dark tendrils of hair loose and wild falling near her navel.

The virgin was beckoned to approach the Queen. Heart racing, she approached the Queen who smiled.

“My child,” she crooned so eloquently. “You are a beautiful soul to offer your pleasure as sacrifice to me, and to your Kingdom. Do you know what this will mean for your countrymen?”

The virgin’s cheeks flushed red and she sheepishly looked down. The Queen’s finger was quick to find her chin and pull the virgin’s gaze back to hers.

The maiden’s voice quivered oh so quietly as she replied: “It is a privilege to offer myself to you, my Lady.”

The Queen was the first to touch the virgin’s skin. “Don’t be frightened, child.” The Queen’s voice soothed. “I give your permission to relax and enjoy.”

And with that, she trailed her fingers down to the maiden’s navel, making a motion to one of the male slaves. He crawled forward, lowering his head between the virgin’s legs and gave her two tender kisses on her trembling groin. The maiden gasped before sinking deeper into sensation: sensation of her Queen fondling her breasts, and of the slaveman who was slowly caressing her with his tongue. It was so different, but it felt so warm. The other slave was motioned to join the trio. He provided hands to rub the maiden’s legs, belly, hair, and adorn her petite frame with kiss after kiss. A fire ripped through her with each tender kiss planted, and soon she found herself writhing on the furs, gasping for “more.”

The one slaveman kissing and tasting her groin began to lick faster with more deliberate passion. He took a finger and started to trace the exterior of her plump, juicy folds. This made the virgin squirm beneath him, but the other slaveman kept her secure on her back with his soft, groping hands on her breasts. He knelt before her with his erection presented in her face. The virgin, having never witnessed an erection before, didn’t know what to do, but found it natural to open her mouth for it, for him. This impressed the Queen and she nodded consent.

As his erection found its way into her mouth, the fingers of the other slaveman found their way into her tight, virgin sex. She gasped through the erection that was slowly thrusting in and out of her mouth. The sensation of her canal being stretched and played with was new, and she relished in this! It felt so good. Never had she ever felt such a euphoria!

“More!” She found herself calling again, to which the Queen once again obliged her. The slavemen switched. The erection that was once in her mouth was now at her groin, and the other slaveman who had been kissing and nourishing her center was now at her mouth, passionately kissing her and gifting her the taste of her own juice. She grabbed onto him, pulling his mouth deeper into hers just as the other slaveman began to insert his erection into her. She had never been penetrated before, and feeling his hard masculinity filling her in one thrust was one of wild pleasure. Fire ripped through her body as he entered and stretched her. She felt his length, felt his girth and the rhythmic pulsing. This is what it felt like to be adored.

The slaveman who was kissing her never broke for breath. His fingers trailed past her navel and found her swollen clitoris. He began to tenderly stroke and coax it while the other maintained his thrusting. The virgin found herself trembling at such touch. She felt full, and flushed, and a pressure began building inside of her with each stroke and thrust.

“My lady!” She cried out in pleasure.

The Queen touched the virgin reassuringly. “It’s called an orgasm, my sweet lamb. I want you to endure it.” She motioned again to her slaves whose thrusts and strokes intensified. Harder, faster, fuller, deeper they devoured the virgin whose body arched and shook with never before sensation.

“I-I-I-I-I- … !!” She cried out again, and her body seized and surrendered to a wash of pure, abyssal pleasure. Her first ever orgasm! Her mouth fell open, her body arched, her hands flew up to grab anything as pulse after pulse, thrust after thrust, tantrums of newfound euphoria entered her body and washed her soul.