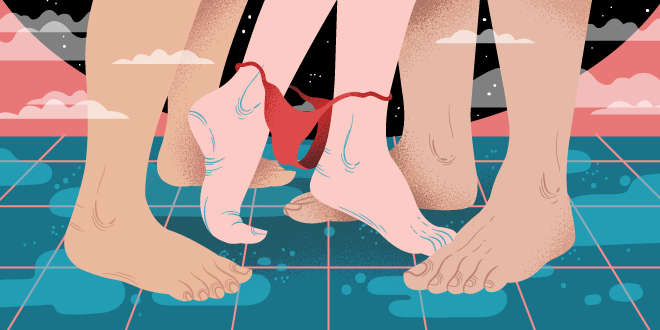 She closed the door behind her and looked around for a space to sit. As always, it was fairly busy and mostly filled with men. Nothing new but hey, she was just here to sweat it out for a bit after a stressful week. She found a space on a ledge and sat on her mat, lifting one leg up and hugging it close, relaxing her arms and closing her eyes.

The two men watched her come in and looked at each other, silent agreement between them instantly, turning back to look at her as she found a space to sit. She looked slightly hassled, had probably had a busy week, then visibly relaxing she held a shapely leg to her. The red bathing suit showed off her curves nicely but she had hidden herself away with her leg.

As if reading their hopes, she suddenly brought her leg down and leant forward, eyes closed, her hands on her legs, rubbing the sweat off her legs and then leant back showing them what they had been hoping to see.

It was too hot to sit like this so she brought her leg down onto the ledge, crossing her feet and resting her hands on her thighs, leaning forward. She leant back against the wall and felt drops dropping off the ceiling onto her face, shaking her head when they landed. She could feel the sweat dripping down her back and into the gap between her breasts and she sighed deeply.

Two sets of eyes watched the sweat pour down between her breasts and imagined what they were going to do to her once everyone left.

She wondered idly, as she often did, if anyone was watching her as she sat here in her thoughts. She liked to pretend each and every one of them were undressing her in their heads.

Eyes travelled down the length of her body and they imagined taking one strap each of her bathing costume and slowly pulling it down over her shoulder and arms, down to her elbow. One imagined taking one breast and lifting it up into his mouth, flicking her large nipple with his tongue slowly, and then faster, circling it and then licking across it and then changing the pressure to soft and then hard using the whole of his tongue.

The other imagined squeezing the nipple between his fingers, pinching harder so she gasped and opened her eyes and once he did that, he would keep watching her and kneel on the floor in front of her, squeezing her nipple tighter whilst with his other hand he moved her bathing costume to the side and thrust one finger into her wet pussy, slowly touching the whole length of her until he touched her clit and teasing it so it began to get hard when he would start again from the back touching her again slowly, always ending up at the clit, waiting for her to edge forward as she did every time gasping. He added another finger and could feel how wet and turned on she was.

She imagined the younger guy with the tattoos on her left turning to her suddenly, pulling her hair back and kissing her roughly, his sweat pouring down onto her, sweat mingling together as he kissed her deeper grabbing her neck with a hand at her throat so she couldn’t move.

The bearded, older man to her right would pull down her bathing costume and touch her breasts, kneading them and pulling them, slapping them and pinching her nipples.

The third man directly in front of her who was covered in dark hair would come across and kneel in front of her pulling her hips to him and moving her bathing costume aside, teasing her by licking her outside at first and then finally penetrating her with his tongue, licking her deep inside like an animal working his tongue all over and inside her, as if he would never get enough.

They inched closer to her slightly, looking at the two other men in the room, looking at each other again.

She wiped the sweat from her face, her hands going through her hair and then down to her neck and cleavage – it felt hotter suddenly and she realised she was reaching her limit and would need to leave soon.

As if reading her mind, the two men in front of her stood up and left, leaving the three of them together next to each other.

She felt a slow trickle down her back and realised it wasn’t sweat this time but someone’s hand and it stopped when it reached her bottom. She felt another hand touch her face lightly, moving down to her neck, hesitating slightly and then slowing moving down her cleavage and freeing one breast from her costume.

The other one was being kneaded through the costume, its nipple being squeezed tightly whilst the other breast was sucked hard. Another hand was pulling her hair down roughly and someone bit her ear. She gasped but didn’t open her eyes.

They signalled to each other – they had done this many times before and worked well as a team. The older man stood up and faced her, then lifted her hips slightly whilst the younger man held both her arms and slipped under her and lowered her onto him. She could feel him under her but didn’t have time to register that as the older of the two then pulled her costume aside and thrust two fingers deep inside her, curling them inwards and inserting pressure. He continued to squeeze her nipple and kissed her deeply.

With all her holes suddenly full, she felt the pressure build and squirted over the man in front thrusting forward but he pushed her back and kneeling in front of her, he licked her until she felt her clit harden, whilst he continued to fuck her with his fingers, making her squirt again.

They both withdrew as they knew she was now ready for them. The younger man lifted her up and placed her down on him, inching forward slowly until she had taken him in breathing deeply.

Once in, she felt another cock entering her in front, so she leant back, welcoming the hand gripping her throat helping to keep her steady, and then both began to thrust inside her, waiting for her to scream in that sweet pain of pleasure. The younger man looked up across her to the older man pumping in front of him as he felt every thrust.

As a child, he had always enjoyed it when his mother had told them to go out for the day and leave her in peace – spending time with his father were some of the best times he had ever had.