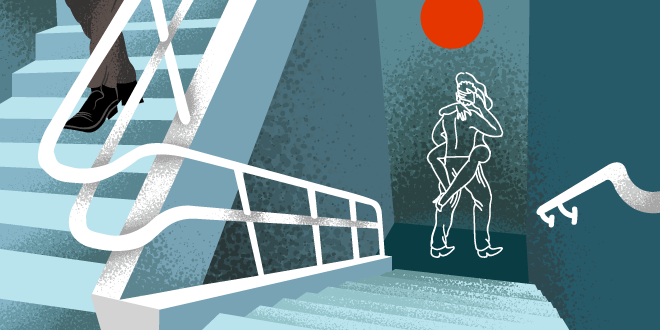 If we were to get caught doing this it would be the end of us.

This “thing” we do would soon be replaced by explanations on my end.

Tears and pleas for forgiveness on hers.

But we’ll cross that bridge if we get to it.

For now, it feels better to uncross her doubts, her hesitation, her resistance, then her legs. It feels better to hear her say “We shouldn’t do this,” as she follows me around the corner. “What if we get caught,” as she closes the door to the stairwell.

The body, not as conflicted, tends to go towards pure desire.

A big red “A” at the top of the door swings beneath a shining red Exit sign. “And what if we do?” I ask as I turn her around. My voice low, but filling the emptiness of the staircase all the same.

“What if they call us homewreckers and dogs?” I whisper as I pull up her skirt. Its hemline creating an equator across the ass I need to destroy.

She keeps her face towards the swinging “A” using it to block us from any onlookers peering through the glass square on the door. She glances back to see what I’m doing. With two hands pressed on her hips, I pull her cheeks open and she gasps.

She then begins to take off her necklace and bracelets placing them in her purse. She makes sure to pull out her phone and set the tone to vibrate. Then off the purse goes to a spot on the floor, out of sight and out of our way. We’ve done this enough times to know that unnecessary noises complicate things. No jingles, no rings, or text flashes.

I undo my jeans holding the metal of the belt buckle tightly. She reaches back and holds her left cheek open. Right where I left it. Her right hand holds the A for balance. She knows she will need to brace herself.

She bites her lip as I slide in, crinkling the laminated “A” into a deformed Z.

I slide in deeper and the friction grows. She withdraws her hand and slows my entry.

I stop, allowing her muscles to brace themselves and relax then continue easing into her until there is no more space between us.

Her hair, all long black waves sways out the way as she looks back at our addiction. A warm sigh escapes her lips – she has no choice but to take it. She closes her eyes as I stroke away the remainder of her resistance. All logic was left in her purse along with her belongings.

The idea of “Getting caught” disappears as my spit lands right below her anus. She couldn’t stop even she wanted to. Couldn’t stop until I told her to. And the last thing she wants is for me to stop. The last thing she wants me to do was not to give her the same thing she has been texting me all day for. People make time for they want, create a smokescreen of lies to cover up exchanges such as this. How can I not give her what she went through all this trouble for?

She opens her eyes, biting her lip as her hair swings pass her cheek and back. She looks back, allowing her eyes to meet mine. With no words, she begs for mercy. With a harder thrust and a thumb in her ass, she received her answer.

Just as I feel her gyrate her hips against mine, her purse begins to move by itself on the floor.

She looks over…I don’t. Her eyes become fixed on the purse and I can tell who’s calling. Poor guy. Nice Guy really. But as horrible as this may sound his girlfriend isn’t here right now. She is someone altogether different when she’s with me. I press my thumbs deeper into the dimples on her back and my strokes become harder and deeper.

An “Uhh” slips from her throat as her eyes roll back. She scowls at me.

I pull back, all the way to the tip, then creep inwards like a tiger stalking in tall grass until her body can’t take me in further. Big ass or not, a pussy is only so deep.

Her mouth hangs open. The inside of her lips glistening like a bird bath in the sun. She bails on our eye contact. Then it begins:

Maybe she does hate me but the shivers of her body say otherwise. They run like the world’s fastest train zipping from her opening and swirling in her belly as others zip up and down her spine at light speed picking up all sorts of carnal sensations on the way. I may be a piece of shit but her body believed I was good for business. Henceforth my nickname in her phone…Rockefeller.

Her skirt cares more about joining our fun and less about staying put. I lift it with two thumbs, exposing the redness of her sand toned cheeks and begin moving slowly, pulling her back and forth against it.

Suddenly, there’s a noise somewhere above us.

Our eyes meet in panic.

It’s a door. Has to be, but who’s up there? Whoever it is, they take a step forward….in the direction of the stairwell. She flinches but I hold her close. We slide further under the railing and pause for a second until the footsteps stop. I put a hand over her mouth. She sucks on my finger and moves her hips back and forth, back and forth. Her wetness envelopes me in pulsating warmth. It feels too good, but I don’t want to finish just yet. I’m not ready to be done and for a split second, I almost give her every drop of cum in my body. I could see her smiling, knowing that her pussy has me on the ropes.

“No, I’m not fucking doing that.” A man’s voice speaks from above, stopping her motion and saving me. No voice replies. This was my chance.

“That’s not my problem” he fires back to whomever he is speaking to.

She pauses and I get my hand around her neck and squeeze. Her eyes roll back as her face reddens. I pulled her into me and thrust forward.

The feet above us begin pacing and pounding against our metal ceiling and in time with the man’s disparaging shouts, she begins to give in. She pulls at my fingers as she begins to lose grip, she digs her nails in the wall as her knees go weak. She whispers her pleasure as he lets go completely.

“IM NOT GIVING HER HALF”

“How am I supposed to do that?”

She squeezes the back of my hand and clasps her mouth with the other, holding back even the finest silk of a scream. The veins in her neck and forehead pulsate with tension. We lay perfectly silent as if death were approaching but I can still feel her shake and quiver and convulse. We are in a bad spot, huddled against the wall, skirt still up, pants still down, foreheads still sweaty, my dick still inside her.

She mouths at  me from the side of her lip, “Is he coming?”

I look up and I can see white fingertips over the metal rail. I was certain the man’s head would soon follow. Probably silver haired, possibly flaky. Muffled noise chatters from his phone and the fingers disappear. I put a hand to her hip, and use my other hand to move her now soiled dress away from my entry. I inch in again. She is done, sexually tapped out and in need of a meal or a bed or both. But something still makes her put both hands against the wall. Something makes her spread her legs open. Something in her wants to please me. I slide in deep. She squints but holds herself together. It isn’t as wet as it was earlier. It doesn’t moisten at the thought of me, those moments have passed. Something makes me pull her into me. After the cravings and intensities, we always had something more. We couldn’t put it in words, maybe it was best not to. She places her hand behind my head as I begin to rebuild the excitement. Stroking at a pace synced with her breathing. A slow sensation only percussion by hearts beating. Tears began to run from her eyes as a new life begins to rise. She is wet again but this time it is different.

The voice above pours over us in fragments.

She reaches behind and pulls me closer.

Her eyes are wide and as serious as the night sky, this “other thing” between us glimmers like stars. I move in again and they shine brighter. Something in me shifts, obeying her.

I can feel her loosening. Her pussy getting warmer as if I were in a slow cooker. Her cheeks turn rosy. Her lips cling to me as if they don’t want to let go. This sex wasn’t the kind of sex one could easily let go of.

As he paces above us I can feel myself losing it. My thrusts dictate their own rhythm. Hips slowly pulsing forward as if they have a mind of their own. Her head falls back as her eyes turn into all-white slot machines. I throw my head back and for a brief moment, we become a theory: something not yet proven but interesting, something that has plenty of ideas around it but can’t really be understood until explored, something encompassing an undefined truth.

A involuntary gasp slips from her mouth.

“Is someone down there?” The man bellows.

The threat washes over us in light streams and all I could feel is waves stirring inside of me crashing into the shores of her. I begin to release everything until a different wave crashes louder than any on the beach.

This time it’s different. Closer than I thought. Close enough to get caught. The sheer ripple of his voice stiffening us to black statues. Snapping me out of this eruption, snapping me out of her pussy back to reality. If we get caught we’re fucked. I’ve done this too much. How many times have I made us take the risk? In hotels and limos, in bars, on flights, at her job and at mine with the stakes higher every time. As high as our careers and families. I had to get us out of this. Erection gone and blood flow normal, my dick falls out, making no sound. I have to think of something before he walks towards the stairs. I only have a few seconds. A couple of moments between his frustration & curiosity and their tension. Something will come to mind as it always does, but before the wit and fast thinking could swim to the surface of the water and breach, a sound comes from beneath.

I was out of time.