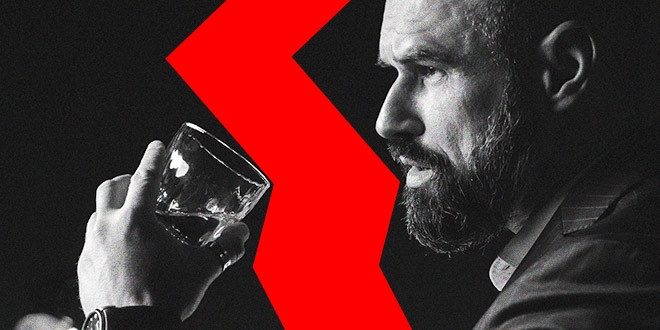 According to the immortal bard Billy S., alcohol provokes the desire, but takes away the performance. Any guy reading this knows precisely what Shakespeare’s talking about – because we’ve all been there. Imbibing too much booze truly amps up your sexual desires, but when the time comes to do the deed, your overindulgence can leave you a little… deflated, to put it one way.

Alcohol-related erectile dysfunction (as it is formally known) is quite common. So common in fact, that the term ‘whiskey dick’ is one that is known by all, drinkers and teetotalers alike. It happens after a few too many drinks, and can put a dampener on an evening.

So how does ‘whiskey dick’ work?

Well, more like how it doesn’t work. As you likely know, alcohol is a depressant for your central nervous system. As you drink more and more, your reaction times slow down and it becomes more difficult to concentrate or focus. Your coordination will also become impaired, and all of these things together will most certainly have a negative impact on your sexual performance.

Where alcohol and penises become an iffy combination is alcohol’s effect of making your blood thinner, which in turn will affect the quality of your erection. Not only this, but imbibing booze will also increase your body’s production of angiotensin, a hormone that has been linked to erectile dysfunction.

Yeah yeah, it might be called ‘whiskey dick’, but that doesn’t mean that it only happens when you’re drinking whiskey, obviously. A couple beers, a few shots of Fireball or whatever godawful thing you’re pouring down your gullet can do the trick if you have enough of them. And no, there is no magic amount or clear measurement of how much booze will result in alcohol-related impotence. The very basic wisdom is that if you don’t want booze to get in the way of your boner, just don’t drink.

Is there such a thing as a ‘whiskey vagina’?

There sure is. Just like there’s a whiskey dick, there’s a female equivalent, referred to as whiskey clit or, as mentioned, whiskey vagina. Even if booze is everyone’s go-to social lubricant, it’s not an ideal lubricant elsewhere. Just like with men, the thinning of the blood that occurs while inebriated also affects a woman’s ability to become properly aroused enough to enjoy lovemaking

There’s no cure or solution for it.

Because of alcohol’s sedative effects, people tend to reach for it as a social lubricant. This creates that vicious cycle of going on a date with a prospective partner, having a few drinks and then not being able to perform at the time you want to the most. Once a guy can’t get it up due to having imbibed too much, that’s it for the night. No amount of foreplay is going to correct the situation — the booze needs to metabolize and pass through his system in order for his hard-on to make a proper comeback. Likewise, nix the erectile aids like Cialis or Viagra if you’re thinking of a ‘hack’ to get around whiskey dick: it’s unadvisable and could be detrimental to your health. Just sleep it off, champ. You’ll get ‘em next time.