We put a lot of stock in kissing. For most of us, it’s our first experience with romance and intimacy, and it can quickly tell us a lot about the qualities of a potential partner. Below, we look at five facts we can learn about kissing to make it all better. 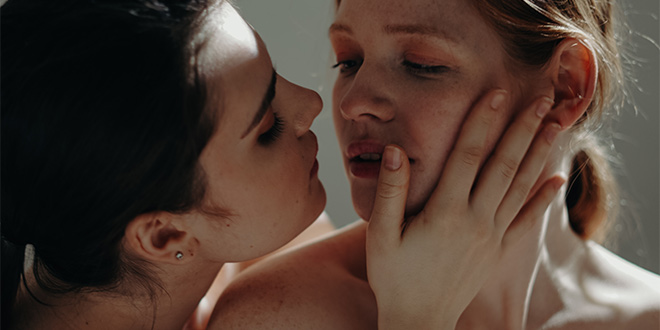 1. Not everyone loves to smooch.

In fact, less than half of the world’s cultures (46%) enjoy locking lips for the sake of romance, according to a 2015 Indiana University study. Of the 146 cultures surveyed, Middle Easterners ranked as the most prevalent romantic kissers, followed by Asians at 73%, Europeans at 70%, and North Americans at 55%. In contrast, there is little evidence of romantic kissing in Central America, and in some populations within Sub-Saharan Africa, New Guinea, and the Amazon. While the science is still out on why some societies simply don’t like to make out, researchers surmise that oral hygiene practices may play a role since kissing can abet the spread of disease.

In the mood for love? Then you’re probably puckering up and turning your head right. Chastely pecking your son or daughter? You’re likely pivoting left. These are the results of a 2016 study that investigated turning bias by surveying hundreds of photos of people kissing. Why couples veer right may be explained by the left brain’s reward center. The study shows that “couples associate kissing with feelings of reward, therefore right-turned kisses could be associated with the increased use of the brain’s left hemisphere.” (The left side of the brain controls the right side of the body and vice versa).

Specifically, chimpanzees and bonobos. For chimps, smooching is less about romance and more about reconciliation, part of a literal ‘kiss and make-up’ routine. Considerably less virtuous than their primate cousins, bonobos kiss more frequently, even preferring the French variety, using their tongues. This isn’t too surprising. After all, bonobos greet each other by having sex. It’s their version of a handshake. Also worth noting, despite this behavior, these kisses still aren’t considered romantic.

4. Men really are more likely to go in for the kiss.

On-screen, it seems men are usually the ones to initiate lip-on-lip action, and in real life too. A 2017 university study surveyed 48 married couples in Bangladesh on their kissing behavior and found that men were 15 times more likely to initiate kisses compared to their wives.

Too much saliva? Too little tongue? A bad kiss, especially when it’s a couple’s first, can end the relationship even before it starts, according to a 2009 University of Albany study. Based on a sample of a thousand college students, researchers found that the women placed much importance on kiss quality and satisfaction and that they wouldn’t engage in sexual encounters without it. On the other hand, the men didn’t make kissing a sex prerequisite nor did they mind having sex with bad kissers.