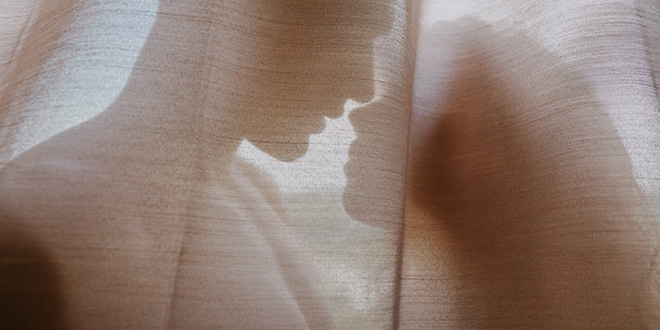 Please tell me you also pictured the famous clay spinning scene from “Ghost” with “Unchained Melody” playing in the background? Or maybe you’ve heard about the woman who claims to have had sex with more than 15 ghosts and is currently trying to have kids with one? Not joking.

Spectrophilia is the sexual attraction or arousal to ghosts, and it’s not really up to you to decide if this attraction is real or not. Just like you may have a thing for bald guys, some people just have a thing for ghosts. We’re not sure about the procreation part, but this fetish is real and so, too, are the orgasms that come along with it. To make things even more confusing, this phenomenon/fetish also encompasses people who get turned on by images in a mirror.

Well that’s the thing, it’s kinda beyond Earth. It’s the spirit world too, remember? This elite group of ghost-fuckers might just beat out the mile high club, however most spectrophiliacs don’t claim they’ve gone all the way with their spirit friends-with-benefits. And even if they have, how do you describe penetrative sex in the realm of the human world? Most say that they can feel weight against them, fingers tracing their skin, the warm breath against their neck. Presence and energy has a lot to do with it too, but they also feel the penetration, which leads to very real and intense orgasms.

This is going to sound pretty crazy (if it hasn’t already), but phantom pregnancies can cause positive blood pregnancy tests without being “pregnant.” This is considering pregnancy in the human realm again of course. But don’t freak out, the urine test will still be negative, but the blood test can be positive. When the brain truy believes something, it can alter the body to mimic the traits. Phantom pregnancies are often known as “false pregnancies,” and they occur in about 1 in every 22,000 human births in the U.S. Most doctors believe that false pregnancies are due to delusions caused by psychosis. We know that a human and a ghost can’t produce a human, but can they produce another ghost?

There are also parents who buy bride corpses for their deceased sons to ensure that they have families in the afterlife. Why would they do this? Because finding oneself without a spouse in the after-world can cause misfortune to the family in some cultures, like the Chinese. That takes arranged marriages to a whole new level, and while this is mostly a tradition from the past, you better believe there are a few people still practicing it.

While sex with ghosts is hard to prove per say, the claims are something that have been recorded long before the fast-fad culture of our 21st century. Who knows, maybe people are onto something. And to clear one final thing up, having sex with someone who’s “dead inside” does not count as spectrophilia, or else there would be a lot more believers out there.