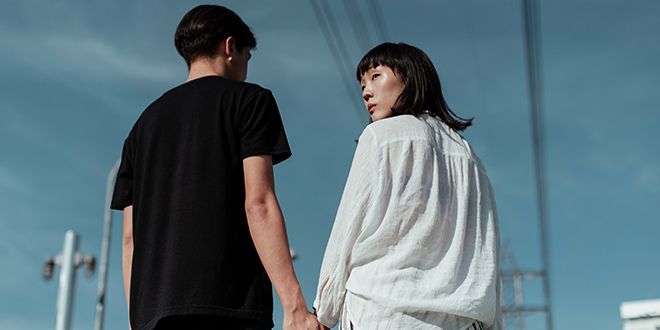 3 Ways To Spot If A New Partner Will Cheat

The early stages of a new relationship are a fizzy, roiling broth of confusing feelings. One of them that commonly bubbles to the surface is doubt. Amongst the excitement, lust, longing, and all the other positive sensations of a burgeoning relationship, there’s also sometimes an expectation that we will be cheated on, and that can lead us to put our shields up a little, and prevent us from being fully open.

That can stop a possibly great relationship before it even really starts. So it’s useful to be able to spot a few little traits in a partner that indicate they might cheat. This is based on a 2019 study out of the University of Quebec, published in an article called Understanding extradyadic sex and its underlying motives through a dualistic model of sexual passion in the Journal of Social and Personal Relationships. Just so you know I’m not making this stuff up off the top of my head.

Here’s three things to look out for.

This is exactly what it sounds like: an unwillingness to become too attached. Couples who are happily attached have little trouble finding comprises and effective ways of dealing with the common conflicts that relationships produce. By contrast, people with attachment avoidance will tend to quickly withdraw from any signs of discord. Things to look out for might involving them having a private space that they retreat to when things get even slightly complicated. This can be anything, perhaps a bar that they never take you to, or an office where they can put headphones on and shut everything out. I can even include the silent treatment – if this happens early in a relationship, it’s a warning sign.

A partner who tries to impress you, or intimidate you, by hinting to the number of sexual partners they’ve had previously is unlikely to be committed. This is more toxic than it sounds. Sure, we’ve all had multiple partners, but to wield it, even implicitly, is a sign that they will use sex to control you, and will seek it elsewhere if they want to. Look out for this one, it’s not just a sign that they will be unfaithful, it’s also an indication that the person values sex cheaply, but still more than real intimacy. Stay away from anyone who even hints at how much sex they’ve had on a first date. Don’t waste your time if you’re looking for something serious.

So those are three quite deep things to look out for, and this is backed up and provable thanks to the study linked at the start of this article.

One particularly interesting outcome, though, regards the issue of gender. We tend to just assume that men are more likely to cheat. Perhaps that was true in the past, but in the relatively large group of subjects, equally male and female heterosexual couples tracked over the course of the year, the rate of infidelity was exactly even. about 13% of men and 13% of women were unfaithful over the year-long duration of the research.

So, at least there’s some gender equality somewhere in sex, I guess.