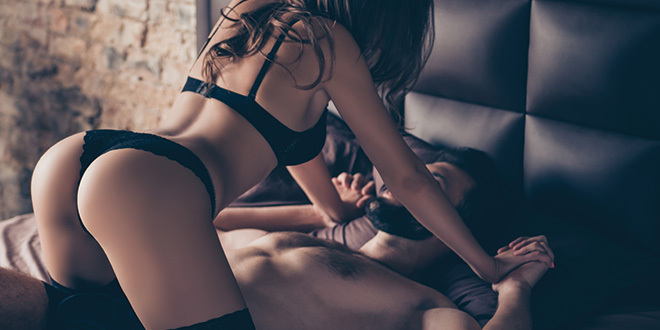 So you know everything about your partner, right? We wouldn’t doubt it for a second, but as with most things, it’s good to keep learning. When it comes to your man and what gets him turned on, check out these other erogenous zones that may be going unnoticed, and make sure you’re not missing the point!

Perhaps not the first erogenous zone that springs to mind, but hey that’s the point. The head and scalp are covered with nerve endings that will amplify the lightest touch, so try softly massaging from the hairline to the forehead. This will activate the release of feel-good hormones like dopamine and serotonin, resulting in some relaxation and a better mood that will get him in the mood.

The Back of His Knees

It might bemight be ticklish back there, but this area is very valuable when stimulated during foreplay. Due to the smoothness and hairlessness of the skin back there, it’s extra sensitive to touch, so try a light, circular stroke to turn up the heat before or during the main event.

According to sex coach and sexuality educator Amy Levine, his ears are “… often a forgotten area that can soothe or excite.” By either focusing some soft smooches or hot breaths on his lobes, you can expect his excitement to grow, or lightly pinch the area where his lobes meet his face and gently tug them downward. Repeat.

“Men love foot massages,” says Ian Kerner, PhD, author of She Comes First. What’s more, according to reflexology, the heels are pressure points that are believed to trigger sexual arousal. Our suggestion? After you get his socks off, use massage oil, especially of the scented variety.

Attention paid to his eyelids is a great way to get him in the lovemaking frame of mind. With his eyes closes, trace your fingertips gently around his eye sockets and over his eyes before laying some light kisses on the area. His closed eyes make it so that you’re in control while he can’t see, changing the power dynamic in a titillating way.

The final frontier for many men when it comes to pleasure, the prostate shouldn’t be overlooked, as it can greatly enhance his enjoyment during foreplay and sex. Prostate massage (with a body-safe and easy-to-clean prostate massager of course) can result in the most intense ever orgasms he’s ever had, and with that sole reason in mind, there’s no reason not to give it a try.

…And of Course, His Penis

When it comes to penile pleasure, there is so much more than meets the eye; when an appendage is home to so many nerve endings, there has to be more ways to stimulate it, right? This is where the burgeoning field of SexTech will prove itself to be very useful. SexTech is the latest advancement in pleasure products that not only provide sexual stimulation, but also feedback that helps its user to learn more about their specific sexual functioning.