Aches and Pains? Here, have an Orgasm 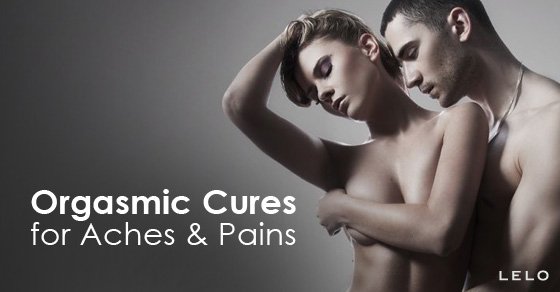 It’s no secret that orgasms are awesome. Aside from the obvious reasons (they feel awesome), they also reinforce pair bonding between partners, and you can keep in even better health by having 200 of them every year.

But did you know that making some time for a climax can help you lessen some of life’s more common pains, discomforts and general hassles? Next time you experience one of the following, go for the O.

After an orgasm, your brain gets flooded with our old friend oxytocin, the feel-good hormone that helps to get you snoozing when you’re already on your way to dreamland but just need that extra push. Fun fact – women produce more oxytocin than men. High five!

When menstruation is at its most uncomfortable, an orgasm will cause an influx of natural, pain-relieving endorphins to float through your system post-climax and combine with the contractions in your uterine muscles, some of the same muscle tissue that experiences cramps during your period. So, lay down a towel and start surfing the crimson wave!

Got a migraine? Those aforementioned endorphins will not only kill your cramps, but they’ll alleviate your achy head. Even better, the same amount of endorphins is released regardless of whether you’re flying solo or paired up with a partner, meaning every kind of orgasm is welcome.

This is one we didn’t expect, but we’re glad to know, because is there anything worse than a case of hiccups that won’t go away? This comes from a doctor by the name of Francis Fesmire, who says that stimulating the vagus nerve, which runs from your brain down to your stomach, can cure your hiccups.

How to do this? A number of ways, we’d assume, but Fesmire counts sex rectally (for men) or vaginally (for the ladies, duh) as suitable stimulation. However it’s done though, he had us at ‘sex’.

So there you have it, just four more of the myriad of ways that orgasms and overall health are so closely intertwined, so go ahead and get busy – you’ll feel better for it!