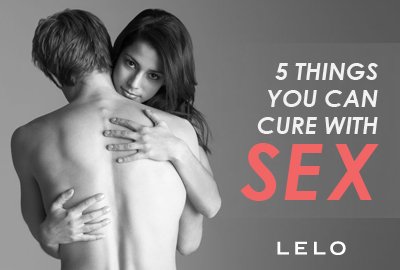 More than ever, sex and health are becoming two peas in a pod. It seems with every new day comes a new study linking the joys of pleasure to the avoidance of pain, and it’s a trend we’ve been staying on top of.

A number of international studies have spanned the entire sexual spectrum: from the emotional benefits of kissing and cuddling to the longer-lasting benefits of having 200 orgasms a year.

But what about the less-widely known biological benefits of the human orgasm?

In our ongoing mission to keep you in the know about your ‘O,’ we reveal these lesser known ways in which orgasms can improve your health.

The clichéd ‘Not tonight – I have a headache’ excuse is valid no more.

According to scientists, the hypothalamus region of the brain – a small, cone-shaped area connected to the pituitary gland and targeted by headaches – experiences activity during orgasm.

As an added bonus, arousal and orgasm increases the amount of oxytocin in your system, which causes your pituitary gland to release endorphins—peptides that dull pain and trigger feelings of well-being.

Your uterus will contract during orgasm, and this helps eradicate cramp-causing compounds and expel blood and tissue.

Pro tip: when having sex during your period, stick to the missionary position – your flow is lighter when you’re horizontal.

Due to a post-orgasm endorphin rush and increased blood and oxygen circulation, your skin reaps some beautiful benefits from the bump and grind.

The “sex glow”, as some call it, is in part also caused by your body’s release of (deep breath, now) dehydroepiandrosterone, or DHEA, which promotes healthy skin and improves your complexion.

For years, pop culture has projected lighting up a cigarette to be a ubiquitous post-coital ritual, but some studies show that orgasms can act as a regulator when it comes to appetite and cravings.

Throughout intercourse, the body produces phenethylamine, a natural amphetamine that may help to reduce cravings for junk food, cigarettes and overeating.

As the old sporting adage goes, the best offense is a good defense, and the same goes for your health.

According to researchers at Wilkes University, people who have regular sex were found to have higher levels of immunoglobulin A, or IgA, an antibody that fends off infection.

In addition, men who have orgasms at least five times a week are at a lower risk for prostate cancer – even less so if prostate massage is involved.

In a perfect world, sex would be life’s great panacea, but there’s no substitute for a healthy lifestyle of good food, family, friends and fitness. Look at the added health benefits of sex as the icing on the cake—and one you don’t have to feel guilty for enjoying!