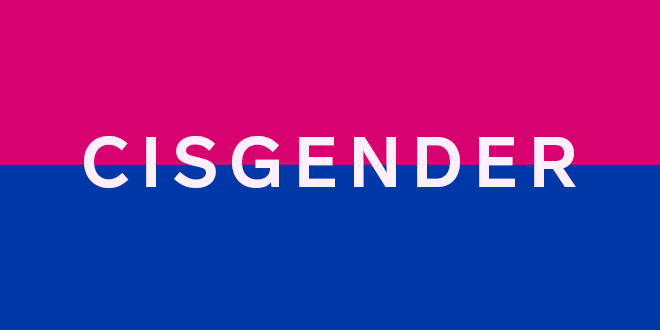 “What a cutie!” I commented when meeting my nephew for the first time. An adorable redhead who seemingly always smiled. “Poor child will probably get ripped to shreds when he starts school, though,” I said under my breath. “By the time this kid reaches school, being a redhead will probably be cool,” a family member replied. To this, I was quite impressed.

The reply I received basically sums up how things are being changed, shaken up, challenged, and accepted these days… including that of sexual orientation and gender identity.

What a glorious time we live in where so many people who identify with what they believe to be their true self, are accepted, embraced, and loved. We’re living in a world that’s continuously evolving, allowing us to learn terms and concepts that we never even knew existed. Like cisgender…

What Does ‘Cisgender’ Mean?

But as we know, not everyone’s birth sex aligns with what they identify as their gender.

Why is the Term ‘Cisgender’ So Important?

Is there a need for a specific term that resembles one who is born a male/female and identifies as a man/woman? Why does the word ‘cisgender’ even exist? In actuality, the word ‘cisgender’ holds positive connotations for many within the LGBTQ+ (Lesbian, Gay, Bisexual, Transgender, Queer, +pansexual, +agender, +genderqueer, +bigender, +gender varient, +pangender) community.

By making use of the term ‘cisgender’ we’re actively recognizing that trans people exist. It’s also a way in which to openly express that one is an allie of those who belong to the LGBTQ+ community. For that reason, many feel it to be a good thing when someone identifies themselves as cisgender.

Side note: Interestingly, a recent study zoned in on 317 transgender children, 189 of these children’s siblings, and 316 cisgender children. These children were asked questions like “How much do you feel like a boy or a girl?” and “What are your favorite toys and clothes?” in order to gauge their sense of gender identity.

The result showed that the transgender children had a stronger preference for toys and clothes associated with their gender identity (similar to that of the cisgender children), and not their birth sex. This is interesting as it poses the question of nature vs. nurture.

“These findings suggest that children might not be simply learning about gender based on what their parents tell them about their own gender or how they treat them early on (which would be about the gender associated with their assigned sex),” said Selin Gülgöz, ph.D, the lead author of the study.

On the flip side, there are some who believe cisgender individuals experience something called ‘cisgender privilege’ which is a “set of unearned advantages that individuals who identify as the gender they were assigned at birth accrue solely due to having a cisgender identity,” according to Wikipedia. In this way, cisgender is given an almost negative connotation.

Some examples of cisgender privilege may include the belief that:

And while these beliefs could be described as ridiculous by some, there are actually a few valid reasons as to why cisgender privilege actually exists, such as:

Is Being Cisgender the Same as Being Straight?

No. Cisgender is more so about one’s gender rather than their sexual orientation. For example, there could be two women, one straight and the other homosexual, but both can identify as cisgender.

The sex of an individual is indicative of their biological makeup, such as their genitalia and genetics. And as we’ve learned, cisgender individuals are born one sex and continue to live being identified as that sex (born a male, continue to live life as a man, for example).

If one is born a sex with which they do not feel is their true self, they would then identify as transgender. For example, one’s birth sex is a male, yet this person strongly identifies their authentic self as a female.

Genderqueer, on the other hand, is when one person does not identify as either male or female. Instead, it’s a spectrum of gender identities that are neither masculine or feminine. In this way, gender pronouns such as he, she, him or her are not used, but rather gender neutral pronouns such as they or them. Genderqueer is also known as non-binary.

When it comes to the definition of gender, this is more so about how one functions and their roles within their environment and society rather than one’s biological makeup (their sex). Genderfluid is someone who doesn’t identify as having a fixed gender.

What is Gender Identity, Androgyny, and Gender Roles?

Gender identity is merely the gender with which one identifies (male or female). This can be the same as their birth sex (cisgender), the opposite of their birth sex (transgender), or they could be genderfluid (identifying with both or neither).

This then brings us to androgyny. Androgyny is a combination of masculine and feminine characteristics in an ambiguous fashion. In this way, someone is not clearly masculine or feminine.

Gender role is the outward manifestations of personality, which is strongly influenced by one’s societal and environmental factors.

For example, if one identifies as a female, their gender identity would be female. Her gender role will too be female if she chooses to demonstrate behaviours, dress styles, mannerisms and more that is associated with being female.

Oftentimes, however, one’s gender identity and gender role are the same.

Where Does Sexual Orientation Fit into All of This?

Sexual orientation is in no way the same as how a person self identifies. There is no way of assuming someone’s sexual orientation based on whether they are cisgender, transgender, or genderqueer.

For that reason, sexual orientation is a different entity altogether, and refers to the gender in which one person is (sexually) attracted to.

Herewith, a list of the most common sexual orientations:

So, big apologies if this article has sounded somewhat stiff… like a scholarly piece rife with definitions. But, in the grander scheme of things, hopefully you’ve gained a bit of clarity when it comes to sex, gender, and sexual orientation.

It’s a wild world out there, and knowledge is power.