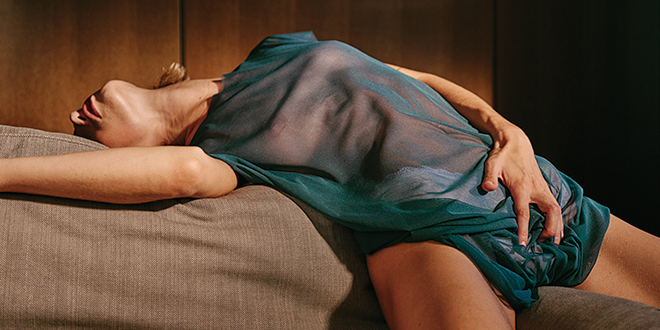 Why Do Women Fake Their Orgasms? The Facts & Figures

If you’re a woman, you may very well have clicked on this article because you yourself have faked an orgasm and you’re curious as to why other women do it. Or perhaps you’re a gentleman reader who has had the sneaking suspicion that you’ve been ‘faked on’? It happens… kind of a lot! And there are some interesting statistics to back up this bold statement!

We’re also going to look at some interesting personality traits that strongly affect whether a woman fakes her orgasms or not.

Lastly, you’ll learn a few tips on how you can give up the act for good, and actually experience the well-sought-after big ‘O’. Exciting stuff, right?

First, we’re going to look at the top five reasons why women fake their orgasms, according to a study conducted by psychologist, Peter Jonason.

Jonason is part of the team at the University of Western Sydney, and he gained his data from surveying 650 participants on their reasons for faking. So, according to the results…

Women Are Faking it…

The most popular reason why females fake it, in this specific study, includes encouragement in two related areas; to give their man an ego boost, and to help push him over the edge when she feels that he’s close to climaxing.

In this way, men are given an unspoken ‘attaboy’ for their excellent work between the sheets, and they get to walk away feeling pretty darn happy with themselves. This extra vote of confidence only creates more conviction for his next sexual tryst.

Interestingly, the second most popular reason why women fake their orgasm is to simply to get the deed over with. When the sex is boring, unfulfilling, or dull, women use the opportunity to fake it as to bring the whole thing to a halt.

3. To Enhance the Experience

4. To Spare His Feelings

For some women, one of the best parts about being intimate is the post-sex cuddle. And whether they’ve been with someone for a while or it’s their first time together in the sac, faking it keeps the peace and keeps him happy. In this way, there’s no awkwardness, arguments, or conflict afterwards, and both partners can enjoy their non-sexual intimacy rituals, if any.

In an odd turn of events, the fifth most common reason why women fake their orgasms, is to throw their partner off because they plan to, or do, cheat. The logic behind this reason is that, if there are still fireworks in the bedroom, what reason would a woman have to cheat?

Is it Anti-Feminist to Fake Your Orgasm?

Courtesy of The Guardian, three women were asked the question, “Do you think faking it is a feminist issue?” Their answers…

Shelby, 28, United States: “I have a theory that you’re less likely to fake it if you can accept yourself, and can communicate yourself to others. This is tied to feminism because women have a hard time doing that. We are taught not to accept ourselves.”

Anita, 51, United Kingdom: “I think it is, but in the opposite way that this study suggests. I think faking it can make you feel more empowered because you are in charge of your body and you’re deciding to do it.”

Lucy, 31, Canada: “Absolutely. Women fake it because of the societal pressure to be desirable and not to upset others.”

Why Do Women Stop Faking their Orgasms?

In a study conducted by Debby Herbenick and partners found in the Archives of Sexual Behavior, more than 1000 women were asked a series of questions anonymously online about their orgasm behavior.

These women, between the ages of 19 and 94, gave their reasons as to why they eventually stopped faking pleasure.

Here are the top three:

Personality Traits and Social Environments Associated with Fakers and Non-Fakers

Interestingly, there have been a number of different studies and research on the kinds of women who are faking their orgasms. The two most influential reasons being their level of communication, and how comfortable they were when it comes to talking about sex and sexual anatomy.

Communication: It’s been shown that women who feel too shy, embarrassed, or uncomfortable to talk with their partners about their sexual needs and desires often fake their orgasms. And the biggest reasons why this communication was not taking place, according to Herbenick’s research, was because they didn’t want to hurt their partner’s feelings (42.4 percent of participants).

Adversely, women who are open about their sexuality, and feel at ease talking about their likes and dislikes, are more likely to reach climax (because their partner knows what gets them going).

Sexual Jargon: In Herbenick’s study, it was found that women who felt uncomfortable saying the word ‘clitoris’ were more prone to faking. This actually makes sense, as opening up about things of a sexual nature would most likely be more difficult for those who don’t feel at ease using sexual terms.

Make it, Don’t Fake it: How to Actually Get Your Big ‘O’

If you happen to be faking your orgasm not for encouragement, emotional distance, or to embolden commitment, but because you’re simply unable to climax during sex with your partner, then it’s time to take your orgasm into your own hands – follow these tips to help you go for your ‘O’:

As mentioned, communication plays a big part in whether a woman is gifted a lovely orgasm. It’s about learning how to talk with your partner in such a way that both feel comfortable and secure. Even those who feel shy using sexual terms, there are other ways you could get a dialogue going, such as using code words.

A big part about reaching your peak of pleasure is letting go. Try to clear your mind of any niggling things left on your to-do list, or use this as a perfect reason to get them done; allowing you to focus solely on feeling fantastic.

Don’t Underestimate the Power of Foreplay

It takes women considerably longer to become aroused, and to reach orgasm than their male counterpart. Which is why foreplay is such an important part of intimacy. Kissing, cuddling and canoodling is a fun and effective path to pleasure for many women. You could even impose a ’10-minute rule’ in which the focus is getting you aroused – or even getting you off!

So, all in all, is faking your orgasm a problem? We’d say yes and no! Yes, it’s a problem if it constitutes a lack of communication with your partner – because how will they know how to help you climax if you don’t openly let them know what you desire?

However, if you reach a point where you just know nothing is going to happen for you (and this is a natural occurrence among ladies, they will agree), faking an orgasm, or intense pleasure, can speed things along to a satisfying conclusion – even if for only one partner.