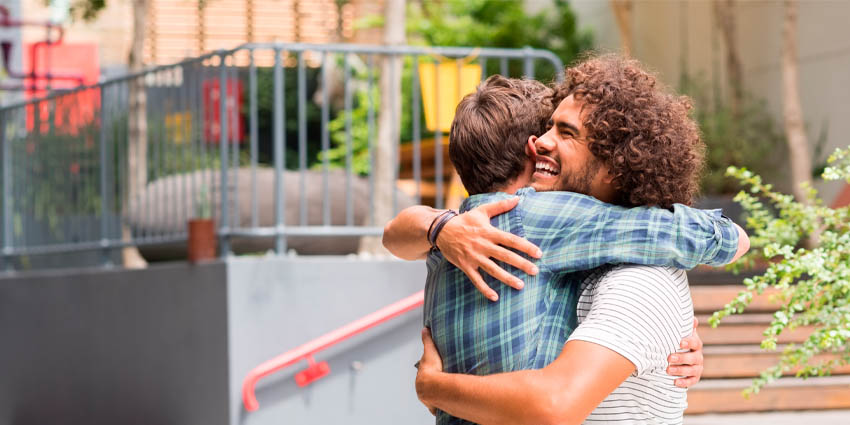 For some, hugging is done out of habit. It’s a sign of affection, endearment, or even a greeting that’s easily practised without blinking an eye. For others, hugging can be quite intimidating. The feeling of two bodies pressing up against each other, after all, is quite an intimate act.

To further prove this point, hugging, in a definition, is to “squeeze (someone) tightly in one’s arms, typically to express affection.” So, yes, hugging can be intimate, but it’s also amazingly therapeutic.

Just think about those videos you’ve most likely seen on social media of people standing in the middle of a crowded area with a sign that reads, “Free Hugs!” And what about individuals whose actual profession is to cuddle? There must be something magical about that warm embrace, there’s no denying it.

Whichever way you feel or go about hugging, there are actually some amazing, and dare we say extraordinary, benefits of hugging. These include not only mental health benefits, but also physical health benefits and an overall better sense of wellbeing.

What Are the Health Benefits of Hugging?

As we mentioned, the act of hugging has a slew of benefits that range from physical to mental, emotional, and beyond.

And today, we’re going to let you in on all the amazing ways that you can benefit from giving your loved ones or those closest to you, a good ol’ fashioned hug. After all, a hug is a form of human connection that all of us need to some degree.

So, the next time you lean in for a comforting hug, you may just be more mindful of how remarkable that act can be.

The 5 Benefits of Hugging

There are surely more than five benefits of hugging, as each individual may experience hugging differently. These five however are scientifically supported, thus they’re applicable to everyone.

When someone is sick, their body may become inflamed resulting in even more discomfort. And even though inflammation is no fun, it’s simply a way for one’s body to try to fight off any infection. In a study however, it was found that those who gave and received more hugs over a period of 14 days had less inflammation in the body than those who received less or no hugs at all during that time frame.

Not only that, but hugging also has the ability to reduce pain! One study found that those with fibromyalgia experienced less pain and an increased quality of life when they received a touch-based treatment, such as hugging.

Researchers found that, in premenopausal women between the ages of 20 and 29, those who received hugs from their spouse had lower blood pressure scores.

Another study looked at 200 adults, split in two groups. The one group was instructed to hold hands with their partner for 10 minutes followed by a 20-second hug, while the second group simply sat in silence with their partner for the same amount of time. The first group was found to have had reductions in blood pressure levels, and a lower heart rate. In other words, touch and affection may be good for your heart health.

3. Hugging Can Reduce the Severity of the Common Cold

One research group looked at 404 adults and found that, when they received hugs, they experienced less interpersonal stress-induced susceptibility to infectious disease. They came to this conclusion by having these adults be exposed to a virus in quarantine that causes the common cold after the 14 days of hugging.

4. Hugging Can Promote the Production of Oxytocin

Oxytocin aka ‘the love/cuddle hormone’ is a powerful hormone that can act as a stress buffer, and prompt people to feel closer and more connected to one another. For example, oxytocin is released after sex, as well as when a mother is breastfeeding her infant.

5. Hugging Others in Support Can Benefit You Too!

Receiving the benefits of a hug is a two-way-street. And in a study, it was found that when someone was experiencing something stressful, the giver of a hug to that person resulted in reduced stress.

This study looked at heterosexual couples in which the men were given unpleasant electric shocks. When their female partner held the arm of their partner during this shock, they experienced reduced stress. Researchers also found more activity in the parts of the brain associated with the rewards of maternal behaviour in the women. Essentially, when we hug someone to comfort them, we too can experience the rewards associated with said-hug.

And there you have it, folks! It’s been proven that hugging has remarkable benefits! So, obviously, we encourage you to reach out and hug someone on the regular (if it’s comfortable for you, of course).