A How-To Guide to Scissoring, and Other Lesbian Sex Secrets

And why is it that two (straight) ladies being sexual is seemingly way hotter than two heterosexual men getting it on? It’s socially acceptable. Women are just hardwired and encouraged to enjoy and participate in girl-on-girl action. Strange world we live in, right?

So, if you’re a woman who wants to learn more about the art of scissoring and other intriguing sexual acts and secrets, or if you’re a man who’s intently interested in the topic, you can consider this your official guide to lesbian sexuality.

Scissoring, often referred to as ‘tribbing’ is genital-to-genital contact. It’s been given the name ‘scissoring’ as it resembles a pair of scissors in action.

But are you ready to have your mind blown?

Scissoring and Tribbing Are Not the Same Thing!

While many believe that the two are interchangeable, they’re actually two different sexual acts.

Scissoring refers to a specific sexual act whereby two women rub their vulvas together while in the position that mimics a pair of scissors. 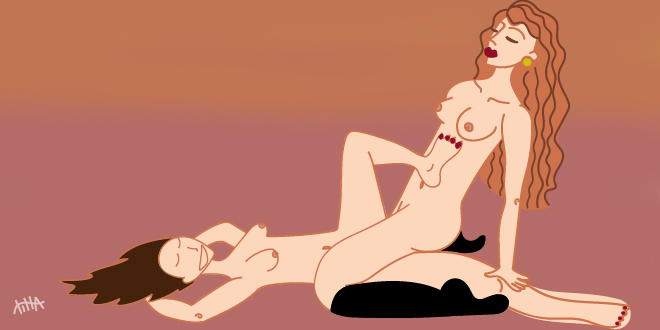 Tribbing, on the other hand, is when one woman rubs her vulva on any part of their partner’s body (the leg, arm, buttocks, belly etc.). Both are done in an attempt to achieve sexual pleasure.

Essentially, scissoring is a type of tribbing. Not that difficult to understand, right?

Do Women Enjoy These Sexual Acts?

But is this sex act a reality for lesbian women? Indeed it is…for some. Some women enjoy it and practice it, while others aren’t too fond of it (just like any other sexual act or position). Scissoring, or a form of tribbing, isn’t the equivalent of missionary sex for heterosexuals.

Scissoring however, is on the rise, as sexologist Mal Harrison says:

“Fifteen years ago, scissoring just wasn’t something commonly discussed in lesbian circles, nor amongst my lesbian and bisexual clients.”

She goes on to say:

How to Practice Scissoring

If you’re hoping to try scissoring, or you’re simply intrigued… here are two different ways you can enjoy it:

Scissoring Position One: Both women should be on their back and have their legs spread open in such a position that it allows direct contact and the ability to straddle each other’s vulva (i.e. one woman’s thigh is placed underneath the other’s). Each woman will then use their own or their partner’s leg as a grip, to help them create movement.

For those whose vulva is higher up, a sitting position has proven to be more pleasurable, while those with a lower vulva find it easier to enjoy it lying down opposite their partner.

Scissoring Position Two: Alternatively, you could try scissoring with one partner on their side, where their one thigh is held up and the other is straddled across the resting leg.

Basically, it’s about interlacing your legs so that you can gain direct access and stimulation to each other’s vulvas.

Another way in which to look at scissoring, is from the perspective of Reba Harrison, a bisexual woman, and writer. She believes that the act of scissoring inhibits the ability to be intimate with a partner.

This is because oftentimes, two women engaging in this sexual act face away from each other. Not only that, but it makes the ability to kiss one another virtually impossible, and makes it hard to stimulate other erogenous zones.

But then again, everyone is different! And if you are interested in trying or experimenting more with tribbing, here are three different positions to get you started:

As distinguished, tribbing isn’t actually scissoring. Rather, it’s an umbrella term. Which is why there are various ways in which two women can enjoy tribbing:

Who’s having the best sex? In a study conducted in 2014 by the Journal of Sexual Medicine, it was found that lesbians experience orgasm 75 percent of the time during sex, compared to 61 percent for heterosexual women.

In a different study, conducted in 2017 by the Kinsey Institute, 53,000 Americans revealed their orgasm statistics, which showed that 86 percent of lesbian women experience ‘the big O’ during sex, and 65 percent of heterosexual women enjoy an orgasm during sex.

How, what, where, who, and why? It’s simple. Women know their bodies. They know where the clitoris is, how to stimulate it in such a way that orgasm is achieved, and they can usually do it without (any) direction from their partner.

Not only that, but the rate at which women orgasm via clitoral stimulation is extremely high as opposed to penetrative sex. Women are also more predisposed to communication and emotional connections as opposed to men.

So whether you’re heterosexual, bisexual, or pitch for the same team, it appears that magic happens in the bedroom when communication, listening, and being realistic is implemented! Easy, peasy!