What is a Menstrual Cup – and Can it Make Sex Better?

And now it’s time for something completely different. Are you sitting comfortably? Then we’ll begin: does a menstrual cup make sex better during your period?

To find out, we’ve enlisted the help of a friendly company, INTIMINA, who, like LELO, calls Stockholm its spiritual home. Swedes of a feather flock together, as they say. One Swedish hand washes the other, as they also say. INTIMINA offers a choice of the best menstrual cups in the world, so we considered it our Nordic duty to try them and share the findings with you, our dear readers.

Periods can often make or break an evening’s plan for amazing sex. Even if you and your partner are already perfectly comfortable having period sex, the need to plan ahead for your cleanup afterward can be a bit of a buzz kill, and many people find that they don’t quite feel the same during sex if they’re using tampons, comfort-wise. Recently, however, people have been looking at how an increasingly popular invention, the menstrual cup, might be the way forward for a cleaner, greener, and sexier future.

Hold On, What is a Menstrual Cup?

A menstrual cup is a flexible, medical-grade silicone cup that’s inserted into your vagina during your period and collects menstrual fluid instead of absorbing it like tampons or pads. INTIMINA’s cup is called the LILY Cup.

While they’ve technically been around since the 1860s, they never really took off in America due in no small part to a lot of misinformation surrounding feminine health—need we remind you that Lysol used to be marketed as a contraceptive?

It wasn’t really until rubber was no longer being used to make menstrual cups in the 2000s that they started to pick up in popularity. Menstrual cups have been gaining ground ever since, and the INTIMINA LILY Cup is currently one of the top two or three available.

Why Use a Menstrual Cup over Tampons or Pads?

One of the biggest benefits of silicone menstrual cups is that not only do you know the material they’re made with is safe, but also that because it’s collecting rather than absorbing, it won’t cause dryness by taking all of your vagina’s natural lubrication, thus minimizing irritation. A win-win, in our opinion.

In fact, a recent survey had 26% of respondents reporting that “their sex life had improved since switching to using a cup, due to decreased dryness and improved vaginal tone.”[i]

Is it just the absorption that’s the problem? Not exactly.

Both tampons and pads largely contain non-biodegradable, petrochemical-based materials that can harm you and the environment from production to disposal.

That’s right—the ingredients in tampons may not be that good for your body. Pads and tampons are listed in an FDA category that doesn’t require them to list their ingredients, including the fragrances that are often included in them. Even unscented, most tampons contain rayon—chemically-treated wood pulp—and pads are about 90% plastic. Pads, as many may have experienced, often do not provide the breathability best for your body, and can cause yeast infections, making any sexual activity off the table until it clears up.[ii]

Guess what doesn’t do any of that? An INTIMINA menstrual cup. Boo-yah.

Of course, for a period problem-solver that will make you feel good on a few levels, you can’t ignore how much better for the environment menstrual cups are.

Quickfact: did you know that the amount of tampons and applicators discarded annually in the US alone could circle the equator 19 times? If you think about how many women there are in the world, getting 12 periods a year, that’s really staggering.

One woman’s tampon use in her life could easily choke a blue whale. We just made that up, but still, do you want that on your conscience? Something that is definitely true, though, is that the LILY menstrual cup we tried can be worn for up to 12 hours, and can last for years if taken care of properly.

Is it Easy to Switch to Menstrual Cups?

If you’ve been a lifelong pad or tampon user, menstrual cups can seem like a big change.

Menstrual cups may look way bigger than what you’re used to, but, when you’re using the right menstrual up, it’s really not all that big a deal at all.

So What is a Lily Cup?

Lily Cup is our favorite menstrual cups, and not just because they’re made by fellow Swedes, though the unique design is certainly something we appreciate.

Lily Cup uses silicone that is thinner, softer and, more flexible, it so much more comfortable to wear. You can actually roll it as thin as a tampon, which is definitely comfortable for people who are making the switch. There are a few different rolling methods you can try out, and they made it easy to insert the cup inside your vagina. Then, Lily Cups have a slightly thicker spine along its side that you squeeze so it ‘pops’ open and gentle seals against the side of your vagina to capture menstrual blood as it flows.

Once it’s full (or within 12 hours) you gentle pull the stem downward to remove it. Then you just dump it out, and give it a rinse and put it back in—making it fast and easy if you’re ready to get busy.

Oh, and if you’re a little bit concerned about the emptying process, it has a slanted, spill-proof rim.

They also have a Lily Cup Compact version, which is world’s first collapsible menstrual cup. It folds flat into its own compact case that’s about the size of a condom, so it’s perfectly sized to keep in your bag or pocket.

So, onto what you really want to know. Did the INTIMINA Lily Cup make sex better? Compared to a tampon, we can unequivocally say yes. Everyone’s cycle is different, but if you’re one of those women who finds themselves extra-horny when they’re on their period, we can happily recommend that your carriage has arrived. 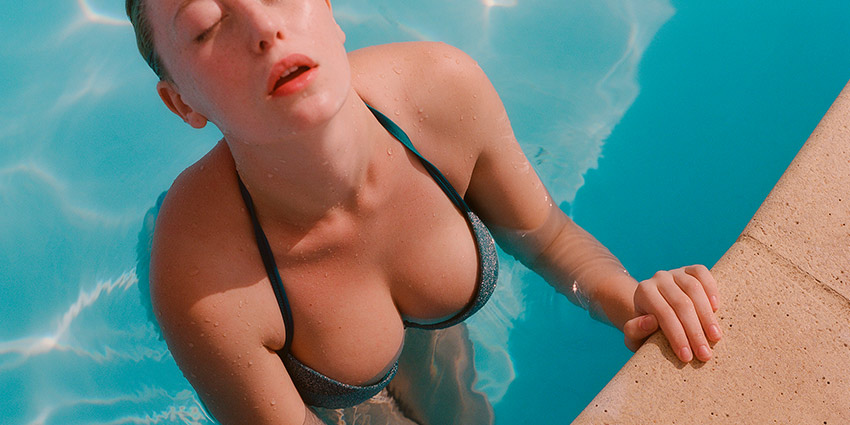