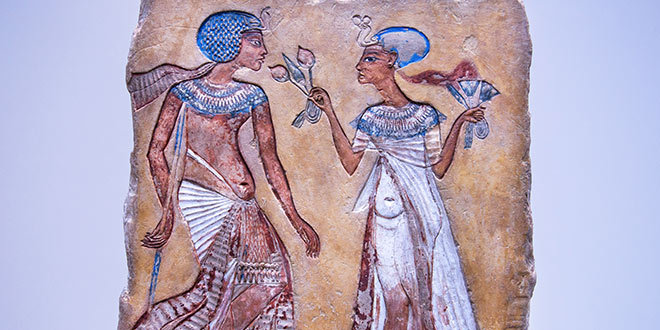 Sex That Changed the World

With a little historical research, we’ve discovered a timeline of sexual desires from notable royals from around the world. Although they existed throughout different eras, it’s clear that sex has been a pleasurable desire since the inception of time. It’s good to hear that our ancestors were just as frisky as we are.

Despite having a reputation as an irritable frump, Queen Victoria, who ruled Britain from 1837-1902, was a very passionate and sexual woman. Her diaries reveal just how much she adored sex with her husband, Prince Albert. The day after their wedding night, Victoria wrote in her journals ‘I never, never spent such an evening.’ Clearly the couple spent many more such evenings as their union was blessed with nine children. For Victoria, pregnancy just got in the way of sex. In 1857, after giving birth to her ninth child, Victoria’s doctor Sir James Reid told her that she should not have any more children, to which she famously replied, “Oh Sir James, am I not to have any more fun in bed?”

Catherine the Great’s sexual appetites were legendary. Her husband, Peter was impotent and sterile. Frustrated and needing to secure her succession, Catherine staged a coup and proclaimed herself empress. Her reign was one of the most successful in Russian history, but may not have happened if she had been sexually satisfied by her husband. With her husband out the way, Catherine’s sexuality was unleashed and she enjoyed scores of lovers who she installed in apartments below her bedchambers. At 60 years old, she succumbed to the wiles of the 22 year old Platon Zubov who remained her favourite until her death seven years later. Her favourite toast was ‘God, grant us our desires, and grant them quickly.’

Cleopatra was one of the most powerful rulers in the Ancient World. Fiercely intelligent, seductive, and powerful, history has remembered Cleopatra as the ultimate femme fatale. She seduced two Roman leaders, Julius Caesar and Mark Antony, and outraged Ancient Rome with her unbridled sensuality and political influence. Sextus Propertius called her the ‘whore Queen’ and Dio wrote she was ‘a woman of insatiable sexuality and insatiable avarice’. Gossips claimed she kept scores of lovers drugged with aphrodisiacs locked up in a temple, that she once had a hundred men in one night, and that she learnt her seduction skills in a brothel. It is not known if any of this is true. But, what is beyond doubt is that what Queen Cleopatra wanted she took. She saw, she conquered, she came.

King Edward (1284-1327) is thought to be Britain’s first gay monarch. Edward’s rule was a disaster and marked by feuds with his barons, failed military coups, and civil war. His downfall was due in part to his intense relationships with his two favourites, Piers Gaveston and Hugh Despenser.  The king had little time for his Queen and was so infatuated with Gaveston one chronicler at the time observed, ‘I do not remember to have heard that one man so loved another.’ Edward’s mistake was not taking a lover, but in giving them enormous political power. The barons sneered that Gaveston was a ‘second king’ and Despenser was called ‘the Queen’. Eventually, the King was overthrown and imprisoned and his lovers were executed.

Grigori Rasputin was a monk and a mystic who became close confidant to Russian Tsarina Alexandra, who believed he could ‘heal’ her haemophiliac son. Rasputin preached that the only way to become close to God was to seek forgiveness from sin – so he sinned as much as he could. He had a harem of Russian noblewoman and was widely rumoured to be having sex with the Tsarina herself. He would tell his disciples, ‘I do not degrade you. I purify you’. Rasputin’s unashamed sexuality inflamed public hatred for the ‘mad monk’ and stoked the fires of rebellion. Rasputin was assassinated and shortly after the Russian royal family were overthrown and murdered.

Maria Luisa ruled over Spain as revolution raged in neighbouring France. The revolutionaries attacked the monarchy as corrupt sexual deviants, and Queen Maria did little to quell such sentiments in her own country. Despite being married to King Charles IV of Spain, she scandalised Europe by surrounding herself with a male harem of bodyguards and cherry-picked the best to be her lovers. She enraged the Spanish government by installing her favourite lover, Manuel de Gody, as prime minister of Spain. Although her husband seemed blithely unaware of his wife’s multiple infidelities, the revolutionaries were not and the Spanish monarchy was overthrown in 1808. When the King and Queen were sent into exile, Maria made sure her lover Manual de Gody came with them, and the three of them lived together until Maria’s death in 1819.

As a young man, King Henry VIII was a truly impressive specimen. At over 6ft (182 cm) tall, powerfully built, and with a shock of flame red hair, Henry was considered to be a very handsome man, and he knew it. Henry was married to Catherine of Aragon but enjoyed a succession of lovers who were more than happy to pleasure the king. But Anne Boleyn was not prepared to simply be a mistress, and did something that Henry was not used to – she refused him. She refused to have sex with him for seven years. Driven wild with passion and love, Henry famously broke with Roman Catholicism, instated himself as the head of the new Church of England, and divorced his long suffering wife, Catherine. The political and religion landscape of Britain was violently changed forever so the King could finally be with Anne. Anne played a good, but dangerous game and the King ordered her execution just four years after they wed.

Edward VIII was only King of England for 327 days in 1936, when he abdicated the throne to marry ‘the women I love’. That woman was the 35 year old American divorcee, Wallis Simpson, who was still married to Ernest Aldrich Simpson when she met the then Prince of Wales in 1931. The royal family may have been prepared to turn a blind eye to a philandering prince, but when Edward became King he announced he wished to marry Wallis they could ignore the relationship no longer. Parliament too was unwilling to see Mrs Simpson become Queen and steadfastly opposed the relationship. Edward was so enraptured with Wallis, rumours circulated that she leant her sexual skills in a Shanghai brothel. Confronted with the choice of Wallis or the throne, Edward abdicated in favour of his younger brother, Albert, in 1936.

When Britain ousted the puritans, they asked Charles II to return as King in 1660. With puritan rule gone, Britain experienced an intense sexual awakening, with their King leading the charge. The king was often called ‘Old Rowley’, after a famous stallion – a well-endowed and sought after stud. Charles had so many lovers, but the most famous and well-loved was the actress Nell Gwynn – the original ‘tart with a heart’. Nell caught the attention of the king when she appeared on the stage showing off her legs, and Charles was a leg man. Charles had many mistresses, but had a real affection for ‘pretty, witty Nell’. On his deathbed, he implored his heir, the Duke of York, “not to let poor Nellie starve”.

When Marilyn Monroe took to the stage to sing ‘Happy Birthday’ to President John F. Kennedy on May 19, 1962, she seemed to confirm the rumours that the two of them were lovers. Intense tabloid speculation and the Hollywood rumour mill fanned the flames of gossip, which continues to this day. JFK was well known as a womaniser and his marriage to Jacqueline Bouvier did little to curtail his ways. Despite the rumours that Marilyn and the president were having an affair, they only met a handful of times in their lives. Most historians agree that the two had sex the night of March 24, 1962, while attending a party at Bing Crosby’s Palm Springs home. Rather than being a great love affair, it seems both Marilyn and JFK were content with a brief, but intense sexual relationship. Susan Strasberg was s close friend of Marilyn and in her memoir she wrote, “it was O.K. to sleep with a charismatic president and Marilyn loved the secrecy and the drama of it, but Kennedy was not the kind of man she wanted to spend her life with, and she made that very clear.”