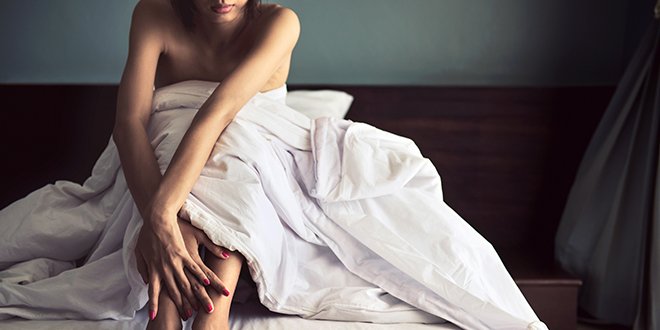 Vaginismus & Anorgasmia: What They Are & What to Do About Them

What exactly are vaginismus and anorgasmia? You may have not heard these terms, or at least, may not have the whole truth about them, but they may affect more people than you think. We are pleased to have renowned Spanish sexologist, Valérie Tasso offer both her simple and non-judgmental definitions and advice for dealing with these misunderstood sexual dysfunctions.

A relatively rare sexual disorder, vaginismus involves involuntary spasm of vaginal muscles that make penetration painful and/or impossible. (It is worth noting that someone suffering from vaginismus  may not have issue reading orgasm, and can enjoy other sexual touch such as oral sex.)

Primary vaginismus is when one has never been able to be penetrated (not exclusively by penises, either) and secondary vaginismus is when this discomfort develops later – from infection, surgery, childbirth, or psychological causes. While these psychological causes can vary, they often stem from fears or anxieties caused by cultural taboos and/or poor sexual education.

Anorgasmia is simply the inability to reach the climax. It does not reflect inability to have sexual arousal or enjoyment, and is actually fairly common.

There are technically 5 types of anorgasmia:

Primary Anorgasmia – When you have never had an orgasm (think, the movie Shortbus)

Secondary Anorgasmia  – You have stopped being able to have orgasms.

Situational Anorgasmia – If you can only reach orgasm under certain conditions (for example, only in your own bed, in a  particular position, only with complete silence, only with your favorite song playing, etc

Relative Anorgasmia -When orgasm is only is reached from a particular stype of stimulation (for example, manual stimulation)

Absolute Anorgasmia –  When there is no apparent method or circumstance in which orgasm can be achieved.

What to do if You Suffer from Vaginismus or Anorgasmia, According to Valérie Tasso

Vaginismus, contrary to what many women may believe, is one of the sexual difficulties that best responds to sex therapy. Basically, this consists of the progressive adaptation of the muscles of the vagina, under the supervision of the therapist, and through dildosof different thicknesses.

It’s important to re-emphasize, that while the term ‘penetration’ is used, this therapy isn’t exclusively for those want to be able to have penetrative, penis in vagina sex. This involuntary impulse is exerted by the vaginal muscles, which, by the way, are very powerful and can prevent, for example, a routine gynecological inspection or the use of tampons and menstrual cups.

Discovering the causes for vaginismus to manifest is not, for us sexologists, a motive of the highest priority – though traditional therapy may also be useful –  because clinical experience shows us that body is very capable of “learning” that the introduction of something in the vagina is not unequivocally synonymous with aggression. That is why  progressive and slow adaptation, without major demands to that circumstance that in principle rejects, usually gives optimal and rapid results in the treatment of this sexual difficulty.

In relation to anorgasmia, one thing is quite clear: the difficulty that a sexually mature woman may have in reaching orgasm almost never derives from a physiological cause – though  some medication may make arousal and orgasm difficult – rather, it usually occurs from not having managed to allow your body to react naturally to the arrival of orgasm.

This is something that many people – especially male partners, may have a hard time understanding –  that women must learn to allow herself an orgasm. For many women, and unlike most men, orgasm is not something that is “given” when they reach a relative or total sexual maturity. It is not something that happens spontaneously but is something that, in the process of shaping your sexuality, learns (or does not) to allow it to happen. This is due, no doubt, to cultural factors, but also physiological, because the machinery of female enjoyment is extraordinarily more complex.

Knowing this, when we are in consultation with patients experiencing problems of anorgasmia, the first thing that we must evaluate is the type of anorgasmia that our patient presents and to evaluate its profile briefly. Those with a great need for control (do not forget that the orgasm is a brief but great “uncontrol” of existential order) or women with very anxious temperaments (the first orgasm always requires an infinite patience and tranquility) or are often behind this sexual difficulty.

Once we have framed what produces the blockage and the frequency with which it occurs, it is only “accompanying” the patient in the process of opening, of permissibility, to the experience of orgasm.

Sex toys , especially those intended for the progressive stimulation of the clitoris, are our best external allies in the treatment of these difficulties. But, the best way to get an orgasm is to not worry about having it, and to stop self-observing with negative thoughts around one’s own sexuality and one’s own body (what Masters and Johnson called “spectatoring” – watching oneself “from a third person perspective during sexual activity, rather than focusing on one’s sensations and/or sexual partner, can increase performance fears and cause deleterious effects on sexual performance.”

In both cases, and we know it’s easier said than done, you have to de- dramatize these sexual difficulties, and don’t discount the value of visiting a sexologist or sexual therapist. The vast majority of people who suffer from vaginismus and/or anorgasmia tend to think that they can never have a “normal” sex life (what is normality in matters of sexuality? Perhaps, that thought is also part of ” self-sabotage “of the patient, unconsciously).

We tend to give too much solemnity to sexual problems. Removing the idea that either of these conditions are the end of the world from your mind is  already a first great step  that makes you more receptive to therapy, and closer to a solution.