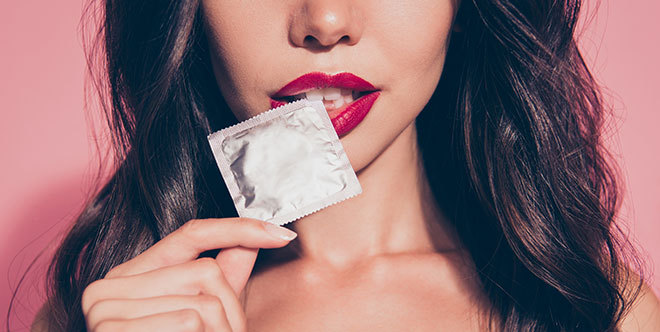 If you haven’t guessed by now, we are super sex-positive and all for you getting laid (if you want to, of course). Abstinence may be the way for some people, but we do know that those who want to have sex are probably going to have it. Sex can be really amazing, but it is a very adult responsibility and we need to cover some things before getting started. Unless you’re trying to make a baby, we’re just here to protect your parts and pieces.

We know, we know, this sounds a whole lot like the sex talk your parents gave you when you were 13, but let’s get serious for a minute. We know all too well that even grabbing a condom from the bedside table can seem like it will ruin the flow, but it doesn’t take balls to use contraception. We have to think long-term here. Practice safe sex with us this Contraception Day (September 26th) and every other day!

Before exploring the many options that are available, please speak with your health professional and explore the side effects of each alternative. Our goal is only to inform you that there is so much out there in the safe sex world, so there are no excuses to not partake in it! So get to it before getting it on.

I’ve tested my fair share of contraception methods, and I have to admit that the IUD (intrauterine devices) are my favorite so far. They are basically little T-shaped devices that are inserted into your uterus by a gyno. There are two different kinds, progestin hormonal IUDs that last up to 5 years and copper IUDs that can last up to 7 years. These chemicals make it a lot more difficult for the egg to be fertilized by sperm. The implant is also another hormonal option that is inserted under the arm skin of a woman and can last up to 3 years (I’ve tried this too and it’s hardly as freaky as it sounds.)

You’ve most likely heard of “the pill,” aka oral contraceptive pills that typically contain hormones like estrogen and/or progestin. These should be taken at the same time every day, so if you’re someone that forgets to put your clothes in the dryer or can’t remember your parents’ anniversary, this might not be the method for you. If you’re afraid of needles, the next method is definitely not for you. Progestin shots are taken in the arm or ass every three months.

We all know about condoms, and some of us even practiced putting them on bananas when we were in high school health class, but condom technology has changed over the years. A lot of people have said that sex feels less sensitive with a condom on, so companies have designed condoms to feel invisible while maintaining their strength and safety. Plus, they protect against most STIs and fit in your pocket. We see why it’s a great option. Did you know that there are such things as female condoms too? Yep. There are also diaphragms, which are flexible silicone devices, and cervical caps, which are silicone cups with spermicide, that can be inserted into the vagina. They aren’t as effective as condoms, but nonetheless an option.

For when you didn’t execute Plan A, there’s always Plan B! It’s an emergency contraception pill that is available in most drugstores for about $40-$50. It’s not exactly cheap for a one night stand, but then again, babies are pretty damn expensive from what I hear. It is more effective the sooner you take it and can be up to 89% effective within 3 days of unprotected sex. However, Plan B is not as effective for women who weigh more than 155 pounds. The copper IUD may be a better alternative in this case (and can last many years after insertion as previously mentioned).

Technology is finally synchronizing with the cycle! There are a ton of period-tracking apps that can be used to track your cycle, and are honestly good for anyone to document their lady health. There’s Clue, Eve, and Period Diary to name a few. Another type of fertility awareness is the “mucus method,” which makes us sound bat-shit crazy but is surprisingly effective. It’s an alternative for natural family planning (or preventing) that involves analyzing the texture of the cervical mucus during the menstrual cycle to help you determine if it’s your conception time. This is good for people with very regular cycles who aren’t so into the idea of altering hormones in their body.

I’ll never forget my boss’s vasectomy after his third daughter. He may have sat on a pillow for a few weeks, but overall he’s quite happy with the decision. Vasectomies involve a non-invasive surgery to prevent sperm from going to the penis. The female equivalent is getting the fallopian tubes tied. This is pretty common for people who want to maintain their sex lives after their done having kids, or for people who know they don’t want to have kids.

A lot of these methods are to prevent pregnancy, not STIs. They also have different effects on different people, so what may be best for me is not necessarily what’s best for you. Trial and error is a common story when it comes to finding what contraception method works for you, so don’t dwell on frustration. We’re doing this all for a happy and healthy sex life, so it’s worth it.

If you’ve tried any other forms of contraception that worked well for you, please comment them below to spread the knowledge of spreading legs safely!