Lust is diverse and personal, and sometimes it’s hard to share our innermost wants with our partners. We fear being judged, shamed, rejected, or sometimes even laughed at for our fantasies, and this is something that no one likes to endure.

But now more so than ever, it’s more common for partners to experiment with a variety of methods to let go of inhibitions. This is fantastic news, as to be sexually free really is something we all deserve.

So, just how are couples letting go of their sexual constraints? Sexual role play! (among other enticing things we’ll save for a rainy day.) 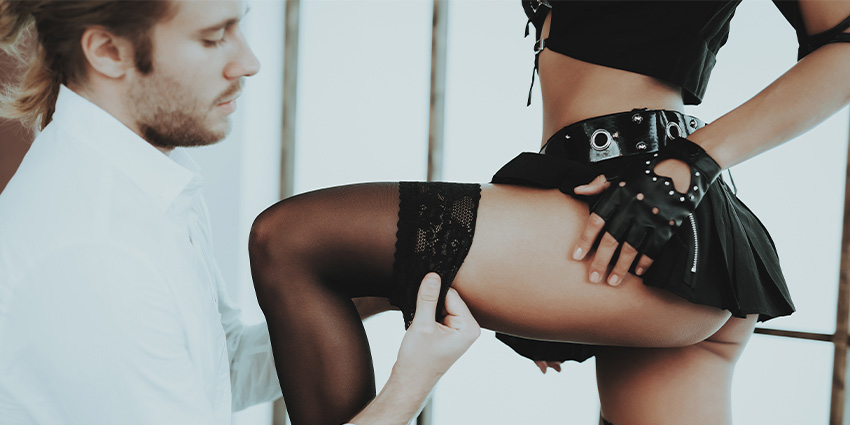 What is Sexual Role Play?

Sexual role play is to take on different personas and explore unexpressed fantasies.

Another element that makes sexual role play appealing, is that it’s not just about the physical act of getting off. It’s actually just as stimulating for the mind as it is for the body.

When one or more partners are able to truly let go in order to fulfill their deepest fantasies in the form of role playing, it taps right into the imagination which, in turn, creates an even sexier physical experience.

Sexual Role Play Scenarios: Do They Mimic What We Want in Real Life?

While the list of sexual role play scenarios are seemingly endless, all of them will either be similar to a person’s current sex* life, or it will be something so far from their comfort zone that experiencing it in real life would be anything but favourable.

For example: A fairly common, run-of-the-mill role play would be the whole student/teacher scenario.

It’s a power play, of course, where the teacher is seen as an authoritative figure, and the student is often referred to as a “naughty boy” or a “bad girl”.

The student then needs to be “punished” for their dirty behaviour, and so a seemingly normal scenario is turned into a sexual role play.

But then, if we look at say, rape role play – an illegal, immoral, and violent sexual act – some men and women may be frightened about having these kinds of fantasies.

The truth is though, these fantasies are just that – fantasy. They don’t have to hold any negative implications when simply kept as such. They are also fairly common. Research shows that about four in 10 women say they’ve had rape fantasies and even more (52%) say they’ve had a fantasy about being overpowered by a man.

But why are so many men and women attracted to the idea of being overpowered or rape fantasies? For some, it’s the notion  that a man (or woman) becomes so overcome with passion and desire that he/she simply cannot control his/her sexual urges.  For others, it’s the (imagined, not real) loss of control that is exciting.

Why Should You Try Sexual Role Playing?

This enticing bit of play isn’t a new idea by any means, but it sure is a good one for a number of reasons:

Your Partner Opens up About Wanting to Try a Sexual Role Play: What Do You Do?

Of course, every human on earth is different. Some may be entirely intrigued or 100 percent on-board if a partner brings up the idea of trying a sexual role play. Others may find it completely unspeakable, ridiculous or embarrassing, dubbing it completely off-limits.

But for those whose partner have come to them in hopes of exploring, that alone is reason enough to feel special – even if the idea is undesirable. This is because it takes a lot of courage for many to open up about things that are so often seen as a taboo.

And if a partner has shared his or her desires, it means that they have unwavering trust and are comfortable enough with their partner to do so.

So, if a partner has reached out, the best thing to do is to be understanding, non-judgemental, and open-minded.

If you’re quick to dismiss, laugh at, or criticise an idea, it could lead to intense shame and embarrassment – which could transcend into other aspects of the relationship.

After all, relationships are about teamwork, compassion, communication and tolerance.

So, to end off, here’s a nifty little cheat sheet when it comes to different sexual role playing scenarios. Use them, adapt them, or go for your own – they all lead to the same thing at the end of the day… sheer pleasure!

The fuzz takes you downtown to ask you some questions. You’re waiting in the blank interrogation room with a cup of really bad coffee when who walks in but the sexiest detective on the force. But you’ll never talk, no matter what this copper has up their sleeve…

This role play scenario has it all: power dynamics, some coercion & manipulation  — and handcuffs!

Take your role play out on the road with this naughty standby that combines car sex excitement and the risky turn-on of picking up a stranger.

Arrange it with your partner that you’ll meet somewhere between an A to B journey. Don’t be too specific however, as this will increase the anticipation.

The stranded hitchhiker might not have any money to pay for gas, but surely there must be another way of repaying you for your kindness?

This is a classic that is especially good for toying with dom/sub roles that can go both ways.

Or perhaps the sophisticated, erudite college professor has some sexy sophomore hanging on their every word.

Both male and female students can develop crushes on their teachers — but how will you keep those flames of desire from engulfing you both in a scalding scandal?

Most role plays toy with the idea of power balance between partners, and this is a classic scenario for that.

One of you are the boss, and the other is the over-eager assistant or new hire who wants to put in the extra time and work to get ahead.

Perhaps you, the boss, are disappointed to see your employee falling behind on paperwork? Isn’t it about time the two of you got together after-hours to tackle some admin?

When you invite a stranger into your home to clean, one that is much sexier than you expected, they need to stretch and bend for those hard-to-reach spaces.

The thought of sex with a perfect stranger is a huge turn-on for most people — so when you answer the door for that extra pepperoni pizza wearing your finest lingerie, don’t forget to tip!

It’s a little cliche and far from original, but hey, it’s a time-honored favorite because there will never be a time that sexy nurses and dashing doctors aren’t hot.

Their high-stress, close-quarter work lives mean they’re closer together than most people tend to be, and perhaps when you give your partner a checkup, you’ll find that they are very aroused… and only you have the antidote!

So, are you sufficiently Intrigued by the fantasy world of role playing?