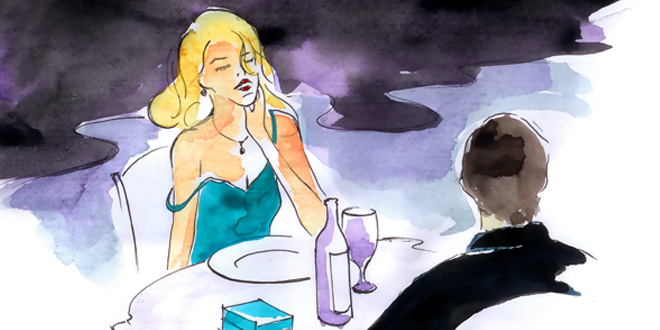 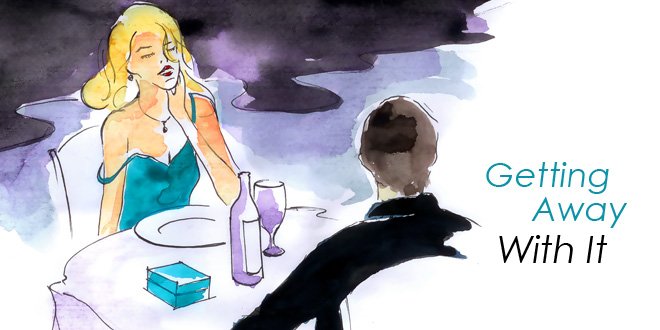 The restaurant faced the ocean, just steps away from the sugar pink sands of their beach-side retreat.

She had played his bikini-clad surfer girl under the South Pacific sun, teasing him to distraction all day. Her minimalist approach to tan lines and her playful whispers in his ear, as she clung to him in the breaking waves, had succeeded in making him restless for her.

By the time they were coaxing the last drops of wine into their glasses that night, the sky had faded into dark violet hues. It created a scenic backdrop to the lulls of laughter and noise in the room, yet she had his full attention. He couldn’t take his eyes off her.

She leaned forward in her chair. “Want to play?”

He raised an eyebrow, but by his eager smile she knew he was intrigued. Her surprises always had a way of turning up the heat in their relationship.

When she pushed the small satin box across the table, he let out a low laugh. “Are you proposing?”

“I’m proposing something,” she answered coyly.

He opened the box and saw the discreet palm-sized blue disc nestled inside. He couldn’t resist a wry grin. “Are you giving me the remote?”

She took his hand under the table and placed it up high on her leg. She was careful not to draw too much attention to their actions or breathe too quickly when his fingers briefly slipped up under her short dress to press against the moist lace between her thighs.

A gentle rumble began as he pushed the button on the disc, bringing the beads inside her to life. They began to rotate and vibrate in a simultaneous rhythm. He could feel her lips, swollen with arousal, trembling against his fingers before he slid his hand back down her thigh.

He leaned back in his chair, appreciating all the possibilities. Now he was free to play with her at will, to carefully tease her just to the tipping point of her self control. He watched her push strands of hair away from her flushed face as the warm ocean breeze caressed her bare skin, the strap of her dress slipping off one shoulder as she shifted in her seat. He enjoyed every suppressed moan as he manipulated the controls. She was a gorgeous sight to behold.

He drank the last drops of wine, imagining what he was going to do to her later that night, as their eyes locked and he felt the tension of their restraint rising. The unsuspecting restaurant patrons continued to dine and socialize, blithely unaware of the game they were playing and how wet he was making her as they sat across the table from each other.

“You’re my dirty girl tonight,” he mused, leaning across the table as he turned the device up to full power. “I want you to come for me, here.”

She knew she would be unable to hold back much longer. Discreetly tucked inside her, the rotating bead was up against her g-spot, while the lower bead kept her body humming. The rhythmic movement and the intensity of his focus sent a warm heat through her lower pelvis. Once it began, she was helpless to do anything but submit to it, biting down on her lower lip to keep from moaning aloud. Her hand reached across to find his, as her head filled with the sounds of the people around them, the crash of the waves not far beyond and her own pulse racing as the throbbing reached its peak.

From there, he brought her down slowly, as her sighs filled the space between them.

“I loved watching,” he admitted with a grin. “And don’t think I’m giving up the control just yet. I’m keeping you turned on for an encore performance in our suite later tonight. You’d better be ready to ride, surfer girl.”

She didn’t bother trying to suppress a wicked smile this time.

It was turning into the perfect getaway.