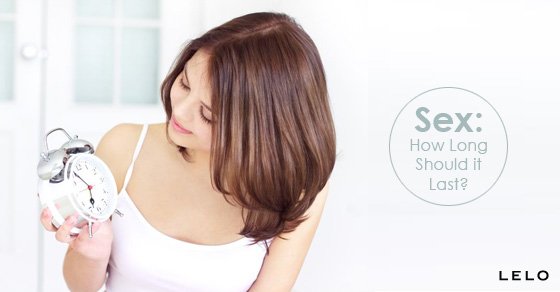 Luckily we all have different likes and turn ons and we all derive sexual satisfaction in different ways, so the topic of the ideal duration for intercourse remains a fairly subjective one.

And while the last thing we’re suggesting is that we all get busy to the accompaniment of a ticking stopwatch, the fact remains that in order for men and women to glean shared sexual gratification together, we all need to give it time.
Though it’s probably not as much as you previously thought.

In 2005, American physician Dr. Irwin Goldstein conducted a survey of 1,500 couples to determine the average duration of their lovemaking sessions. The result? 7.3 minutes, which we reckon is a lot less than certain aspects of modern popular culture have lead us to believe.

Then, three years later, Dr. Eric Corty, another American, published the findings of a study carried out on 50 couples to determine the length of time they would like their lusty liaisons – that is to say, from penetration to ejaculation – to last. The findings showed:

It takes men somewhere between three and five minutes to orgasm and women considerably more, so if your aim is to crack the holy grail and enjoy a shared climax, he needs to hold back a bit.

With that and the above stats in mind, a great way to help him is to encourage him to focus more attention on her erogenous zones during foreplay, as studies suggest it takes women somewhere between ten and thirty minutes to become fully aroused.

Picking out all the best bits during the entree should work wonders when it comes to enjoying the main course later on.

So now that we’ve dazzled you with the kind of science that would have actually had you paying attention in high school, it’s time to do a little math too.

Ten to 30 minutes of foreplay in addition to between seven and 13 minutes of sex means the ideal length of time a session should last is anywhere between 17 and 43 minutes, depending on your penchant for foreplay and of course the main event itself.

We guess that means there’s no such thing as the up all night sex sessions we read about so often in all the gossip pages and that the ideal duration for making love is simply as long as those who are doing it say it is.

So whether it’s your fifteen minutes of fame or just seven minutes in heaven, everyone gets their time to shine at some point. How long will yours last?
[related_article id=”5339″ size=”full” target=”_blank”]