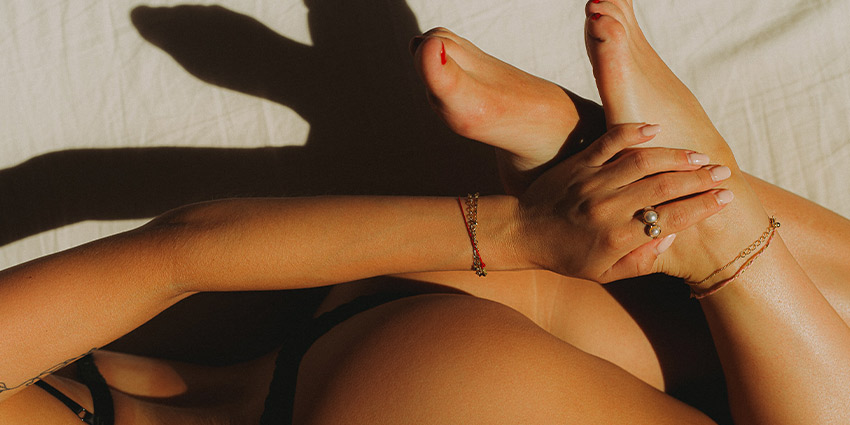 Today, we’re talking about a rather touchy subject… that is, touching!

But why is touching so important? Because the more time, effort and expertise you put into touching her the way she likes, the better arousal she will achieve! It’s that easy to understand.

So, put your thinking cap on and get ready to learn all about her erogenous zones, aka: the spots that cause her immense satisfaction and sexual stimulation.

Take notes, copy and paste it, print it out – heck, you can even tape it to your wall if you have to!

But first, a little context!

What is an Erogenous Zone?

An erogenous zone is a spot on the body, male or female, that has heightened sensitivity. And when one or more of these zones are touched, it can cause sexual feelings, from arousal to orgasm.

Now that you’re up to speed, here’s a super helpful guide on her erogenous zones. Read carefully, and you’ll be walking on sunshine tomorrow!

The clitoris is the most sensitive erogneous zone for most women. While it is a vast organ, made up of internal and external parts, it’s external parts are the glans (analogous to the head of the male penis) and a hood that covers it (analogous to the male foreskin). The clitoral glans is often so sensitive that it is painful to touch. That’s because it has about the same number of nerve endings as the head of the penis, but all jam-packed into an organ the size of an eraser at the tip of a pencil. This is why many women love their clitoris to be stimulated through the hood that covers it, or even through their panties. Some women like stimulation a bit to the right of the clit and others to the left. This is why, when stimulating a woman’s clitoris, it’s really essential to “ask for directions” down there. But it’s really worth doing so because the mast majority of women orgasm from clitoral stimulation rather than penetration.

For those still exploring, you’ll find the clitoris at the top of her vulva, where her inner labia joins together at their upper ends.

How to Stimulate the Clitoris

One possible winning move? Try soft licks with your tongue directly on her clitoris while rubbing circles around it with the tip of your thumb. While doing this, be sure to listen to her verbal and physical cues. Her body language can be a dead giveaway when it comes to hitting the right spot.

Did you know that the inner lips engorge with blood just like a penis does during erection? The inner lips are filled with erectile tissue that can double, even triple, in size when a women becomes aroused. Because the lips and clitoris are physically connected, a lot of women find that stimulating their lips indirectly stimulates their clitoris, which may be a preferred way of stimulation since the clitoris itself is so sensitive.

How to Stimulate the Inner Lips

Try stroking and gently tugging on your partner’s inner lips to indirectly stimulate their clitoris. Since the lips are filled with erectile tissue, it can help them engorge with blood (or heighten general arousal).

Perhaps the most hotly debated of her spots, the G-spot (which stands for and sounds more catchy than the Grafenberg spot) is an erogenous zone that is elusive to some women and a hot spot of orgasm for others.

While some debate whether or not it even exists, we’re very content to busy ourselves with the research, which is where the fun is.

You’ll find the G-spot located 5 to 7 centimeters (2 to 3 inches) inside the vagina on the anterior – frontal – wall from the vaginal opening.

You’ll notice that this area feels slightly different from the rest of the vagina; a little bumpier.

How to Stimulate the G-Spot

There are a number of great sexual positions for G-spot pleasure, but for the most effective G-spot massage, your best bet is with your own hands.

Place your index and middle finger in her vagina with the tips on that special spot. With your fingers together or spread apart to make a peace sign, start curling your fingers in a ‘come hither’ motion.

If you don’t feel like using your hands, you could opt for a G-spot massager. Both will do the trick sensually and seductively.

Although not as many as the clit, the vaginal opening has a lot of nerve endings that are receptive to touch., and there are even more inside the vagina.

How to Stimulate the Vaginal Opening

Next time you’re thinking of penetrating your partner with your fingers, try and tease the opening of their vagina instead. You’ll probably discover her squirming and moaning for more. You can also use your penis as a tool to stimulate the vaginal opening without penetrating it.

Oddly enough, the mons pubis is an unfamiliar name for many, but almost every human being will be familiar with the area… It’s the spot directly above the vagina, where her pubic hair grows.

This area is full of fatty tissue and acts as a kind of padding to prevent knocks and bumps during sex* and other daily activities.

How to Stimulate the Mons Pubis

When the mons pubis is stimulated, this sweet spot can really get a woman’s motor running. This is mostly because it is full of sensitive nerve-endings. A lot of women like it when you push on, pull upward, or make circular motions on their mons.

Interestingly, both men and women’s scalps are covered with nerve endings that make them very receptive to touch, even if they are non-genital.

Not only that, but did you know that one of the biggest reasons for a woman not orgasming is because she doesn’t feel comfortable or relaxed? A head massage is a great way in which to induce relaxation, making her more receptive to an orgasm.

How to Stimulate the Scalp

Scalp massages are easiest when her hair is dry, when you can trace your fingernails lightly over her skin, or during a shared bath when her hair is thoroughly wet and conditioner is applied for some extra viscosity.

Then, gently circle her scalp with your finger, or tug on the hair – which ever makes her feel the most relaxed.

When we kiss someone, a slew of neurotransmitters are released throughout the body. These influence the way we feel and think (imagine experiencing a kiss that’s rife with chemistry, and how that makes us feel).

And, while a delicious kiss is definitely the right way in which to peak arousal, even kissing can fall into routine territory if it’s always the same.

Which is why, if you learn how to get her excited via your kiss, you’ll not only pave the way for lots of fun, but also cause her to feel weak in the knees.

How to Stimulate the Lips

Get things started by tracing a fingertip around the outside of her lips before even starting to kiss her. Then, when you do start with the smooches, vary the strength and intensity, alternating between light, deep, short, long – all kinds.

In this way, you’re creating the element of surprise as well as a bit of teasing. Both will increase sexual excitement.

While for some women, touching behind the knees will be nothing but ticklish, for others it may be the right touch on or behind her knees can actually send her spiraling into arousal. And what a delectable spiral that will be!

How to Stimulate the Knees

Have your partner stand in front of you while you gently glide your fingers at the back of her knees. If this is too ticklish for her, you could try massaging them, changing the pressure from hard to soft, deep to a tickle.

You could then ask her to lie down on her stomach, so that the back of her knees are more exposed. Run your tongue slowly along the backs of her knees and thighs.

For some women, the way to light up her brain is to go for the nipples! Sounds odd, of course, but when some women’s nipples are touched, it sends the same signal to the brain as when her hot spot (the clitoris) and other areas of her genitals are touched. Some (rare) women are even able to orgasm by nipple stimulation alone. Interesting stuff!

How to Stimulate the Nipples

You can start by making soft gliding circles around the nipples without actually touching them. This builds suspense and sexual anticipation. Then, move onto the nipples with feather-like touches. Go from the nipples to the breasts interchangeably, slowly and seductively.

From this, you can start to pinch the base of the nipple, but make sure she’s comfortable with that.

And lastly, you can combine the pinching with a bit of rolling of the nipple by using your thumb and index finger. Go from light to hard pressure to build more suspense…

Interestingly, a study published in the scientific journal, Cortex, said that more women were turned on by the nape of their neck being touched as opposed to their breasts or nipples.

And between laptop cases, purses, baby bags and gym bags, a woman’s neck is under constant strain. A sensual massage, a few kisses and nibbles will surely give her some time to relax.

How to Stimulate the Neck

Start with soft kisses on the side of the neck, and use your fingers to slowly brush this exposed erogenous zone.

Then, use your tongue and teeth to give her small licks and nibbles, trying different pressure and speeds to find the exact thing that makes her feel insatiable.

So did you get all that? We certainly hope so! By using these tips and tricks, you’ll soon become a true pleasure pro!

And with that, we wish you lots of adventurous fun on all of her erogenous zones. But remember, the most erogenous tip of all is to ask her what feels good while you are touching and follow her cues!