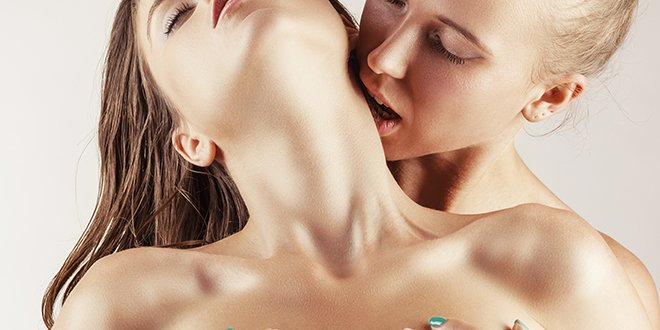 “What you need is for me to come inside you, darling,” she murmured against my skin, with a lingering kiss to my buttocks. “All you have to do is ask.”

Ask? Apparently, for Iris it was not enough to move my hips against her with immediate need. Or, as much as I could. I felt like I was about to spontaneously combust while simultaneously feeling shivers of pleasure travel up and down my spine. I swallowed, as I felt her nails dig into my hips, drawing me even closer.

“Come on…” she breathed, letting her works travel up my backside and up toward my ears.

Then I felt her grasp loosen as she stood, letting her mouth graze along the skin of my back, then shoulder, then neck.

There are difficult things in life: choosing between carbonara pizza and barbecue, for example. Or whether to give your driving instructor access to a restricted area. Her tongue licking my neck and hands roaming over me as she waited for my response were the drops that filled the glass half full, then overflowing with certainty. I turned around in a quick movement to find her lips and kiss her impatiently.

“Do it, Iris,” I pleaded, on the verge of despair.

Now yes: green light and picking up speed at times. Pulling me to the bed she lay me down and, with an irresistible smile, told me to wait there.

As if I could have gone anywhere in these conditions.

I kept my eyes closed, trying to control my now heavy breathing, glued to the spot she had left me.

I listened for her confident footsteps, which seemed to move to exactly in time to the music which I had, until now been ignoring me.

She took my chin and looked at me for one, intense moment, before kissing me deeply. I felt as though I might fall through the mattress when her fingers re-entering my ass jolted every nerve into electric awakeness. In time to the music she kissed me, while letting her fingers ebb and flow increasingly deeper within me.

“Let me know if anything is too much,” she said, relinquishing control of my mouth.

I babbled something meaningless in the form of “yes,” “okay,” or any other word of affirmative value. She smiled, and gently flipped me over so I had a pillow under my stomach. Any coherence I might have had evaporated as she placed her legs on either side of mine, prone on the bed.

I had barely noticed a pause in her attentions while moving me, but now I felt a second finger join the first and I swear I have never been so excited in my life. I missed her in my wet sex, so much so that it almost hurt, but what I was experiencing back there was worth it.

Suddenly, she withdrew. Yes now. At last. In the grip of curiosity, I dropped my head into my arms and closed my eyes, abandoning myself to my senses.

“Relax, precious,” she whispered, bending over back.

Anything she could have asked,  I would hardly have been able to refuse, but my several quick nods were largely to convince myself I could reIax. Then, a pressure, more than her two fingers but just as I thought perhaps no, I couldn’t handle this – it progressed within me to a fulfilling pleasantness.Then she stopped. Then onward slowly again. Her expert caution was ensuring I felt the full intensity of her exploring me without discomfort, yet made me foolishly hungry for more, now.  .She stopped after what felt like a lifetime, fully inside me, and released a deep breath. and released the air he had been holding. Without giving me too much time to process the sensation, she withdrew slightly and slowly, before returning with a soft but deep thrust. I groaned loudly, grabbing onto the sheets.

Little by little, she increased the speed, while returning to that impossible deepness. Every time I felt her hips against my ass felt like I was about to completely fall to pieces with the intensity of pleasure it caused.

Or perhaps it was her left hand, which pinched gently at my nipples. Or her right, which were positioned on top of the pillow in folds around my clit as I rocked against them.

Pleasure was enveloping me from so many sides I felt delirious with an inability to focus on any one. My heavy, erratic breathing was punctuated by moans and gasps as she moved with in me, and I held onto the pillow beneath me like a life saver, the only thing that could keep me from falling off the bed, or floating up to the ceiling.

Her thrusts were shallow but quick now, and with each wave of sensation I felt closer and closer to climax. She was breathing hard now too, almost smothering me from above with her breath hot on my ear.

And then, with an intensity that shocked me, she sank her teeth into my skin, her hips shudder against my body with a prolonged orgasm.  Desperate for deeper, for more, I pushed backward against her, and she complied with short, heavy thrusts that forced my slow-building orgasm to its final, thudding reward.

As the ringing in my ears faded, I finally noticed her weight on my back, and the peaceful rise and fall of her breath. She must have been as exhausted We remained silent, while our respective breaths slowed down and synchronized. Finally, Iris bit my shoulder lightly before saying:

-So shall we get you your pizza?