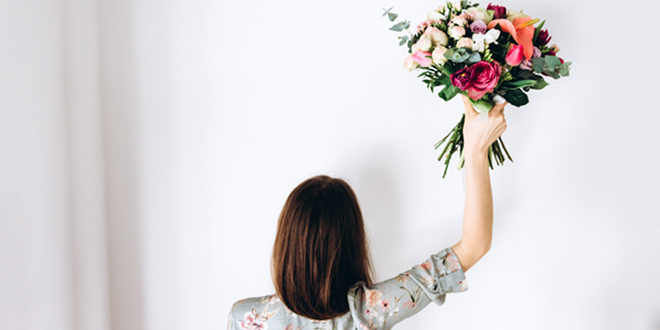 I Choose Me: The Case for Sologamy

Alright, alright. I can already hear it: not the wedding bells for the next solo wedding, but the heckling. It’s coming from the comments section, and from trolls on social media. Sologamy, the art of marrying yourself, has long been the butt of many an anti-feminist joke.

But if you can, just hear me out. I’m a sex positive feminist, sure, but I’m also married – very happily, I might add. My husband is my best friend, and we get lost staring into each other’s eyes at least once a day. I call him my “diamond,” and not just as a joke. Still, I hope one day I can find the gumption to marry myself.

Married, single for life, or blissfully in relationship anarchy, we all can learn a thing or two about dating and yes, marrying ourselves.

The trend started with a woman named Linda Baker. In 1993, she was approaching forty, fast. Instead of dreading it, or just reaching that milestone without fanfare, she chose something different. And so, on her birthday, Baker invited her seventy five nearest loves to a bar, put on a white dress, and vowed to love, honor, and cherish herself.

She wasn’t intending to start a global movement, or even to make a statement on feminism. All she wanted was to commit to valuing herself. “It’s about doing things for yourself,” Baker said, “and not waiting around for someone else to make it happen.”

That sentiment seems to have stuck, and her solo marriage quietly sparked a movement that has persisted for the last thirty years.

We have this cultural obsession with certain milestones: getting married, having a baby, having another one. Especially for women, these life markers are seen as more important or revolutionary than achieving career goals or graduating with a Ph.D. Personally, I received less congrats from friends and family over getting my master’s than I did for legally binding myself to my partner. But if you ask me which one was harder work? Which one was a more thankless task, and the thing I blame my first wrinkles on? Grad school takes the cake, in every possible way.

Not that there was cake to commemorate it with. There was no massive party. No toast over champagne. No bouquet to toss to the next lucky graduate. Sologamy is a movement bent on pushing that dialogue forward, at least a bit.

Every few years, a buzz rushes across the web as yet another woman chooses to marry herself in an opulent ceremony, replete with the smiling officiant, pricy dress, and (solo) honeymoon to a bucket-list destination. Guests watch as the bride cuts the cake, and sometimes, her father even walks her down the aisle.

This trend of traditional weddings being just a day to love yourself is all around the globe. In Japan, Cerca Travel offers a wedding package for about $2500. Women can rent a wedding dress, get their hair and makeup professionally done, and then pose for wedding photos somewhere idyllic. While these ceremonies aren’t quite the whole affair, they’re still memorable days designed for women to want to celebrate themselves.

The travel agency didn’t quite get that memo, as they offer the option of a male model posing as a groom. Unsurprisingly, not a single client has taken the agency up on that offer. For women using Cerca Travel’s service, it isn’t about wishing they had a beau. It’s about loving themselves enough to feel magical for a day.

But just like how your Aunt Gina’s traditional wedding looked very different from your bestie’s artsy extravaganza, solo ceremonies are delightfully diverse. Whatever you’ve always wanted in a wedding is yours when there’s no one to argue about cake flavors with. So if you’ve always dreamt of baby’s breath in your hair, bridesmaids in taffeta, and a reception in a converted barn glowing with fairy lights, it’s yours.

But if your dream wedding is under your favorite tree in the woods, with no witness but the birds flitting in the canopy above you, you can have that, too. That’s the beauty of sologamy. The magic and wonder of committing yourself to yourself can come through a big hoorah, but it can be just as memorable when you’re the only one who’s watching.

Often, people who marry themselves fall somewhere between a bona fide wedding party and a solitary vow. Groups of friends can marry themselves together, or even have their partners in tow. To make the process easier, some companies offer special sologamy kits.

Their packages include ceremony instructions, vows, and twenty-four affirmation cards to help you continue your “practice” of self love. Spring for a pricier package, and you can snag a twenty-four karat gold ring to wear daily as a reminder of the vows you’ve said to yourself.

One woman shared her story on their site. She got her friends together one year on her birthday and surprised them with a ceremony for marrying themselves. Her inspiration was that they were “all busy women, juggling families, jobs, [and] complicated life circumstances.” Together, they all promised to honor and love themselves. Now, all the women value the ring as “a visual reminder to practice self-care, and that self love [is] a daily necessity.”

As touching as their stories are, you don’t need to buy a fancy package to have a solo wedding ceremony. You’re the only person in the driver’s seat, and nobody else has to sign off on the specifics of your ceremony. This day’s all about you.

Several years ago, my bestie invited me to a bonfire deep in the North Florida woods. When I got there, a gathering of artists circled the fire. One young person fluttered around the fire, painting people’s faces in stripes and dots and whorls, her face warm and hopeful against the dark. Some of the artists had brought paintings, journals, and drawings that no longer served them, and threw them in the fire, announcing what they were letting go.

A handful of them stood, art teachers and students side by side, and had a marriage ceremony to themselves, promising to commit their lives fully to their art, passions, and dreams. Without even meaning to, I had stumbled into attending my first (and so far, only) sologamist marriage ceremony.

Why do people marry themselves?

To be completely honest, watching these people marry themselves scared me. The thought of giving myself over to my own goals sent panic scratching its way up my throat. If I put myself at the helm, I thought, what excuse would I have when things didn’t pan out? And what would a partner think if I married myself, anyway?

These kinds of thoughts are common among people who’ve never contemplated sologamy, and over time, I realized how wrong my way of looking at it was. The path to sologamy exists because people are trusting themselves with the keys to the kingdom. And the one demographic that struggles the most in trusting their autonomy is the same one that marries themselves the most often: women.

I couldn’t find any data on queers marrying themselves, but I have a feeling we like to do it, too, since we’ve been taught our voices should never be heard. While anyone can marry themselves, its women whose solo weddings gather the most notoriety on the web.

For the most part, the trend isn’t met with joy online. When writer Erika Anderson married herself in 2016, people didn’t take kindly to it. As soon as her wedding video went viral, the hate mail started streaming in. She thinks people rail against it for a reason. “…women marrying themselves might seem incredibly threatening because it looks like we’re saying men are irrelevant,” she says, “but we’re actually just saying that we matter.”

That is the heart of sologamy. A reminder that we matter to ourselves.

No matter how feminist a relationship seems, women romantically entangled with men often find themselves caving into their partner’s whims. Some are small, like what to watch on Netflix, while others are large, like moving states for work. I see it happen to even my kindest friends in straight performing relationships. Women are taught from a young age that they can have their career, hobbies, and passions only after they’ve taken care of their partner, raised their children, and managed the family’s calendar of commitments.

As a whole, women are getting fed up. More and more are realizing they don’t have to live that way. It’s not that women who self marry don’t love their partners or spouses, or that all sologamist folks are single. It’s that these women want to recognize that, by themselves, they are enough.

That doesn’t stop people from feeling threatened. But still, there’s something beautiful about recognizing yourself as important and vibrant enough to love. It’s not a threat to monogamy or polyamory, but a promise to yourself to be radically gentle, and to pursue your furthest-flung dreams.

Once you peel back the veil, you start to see that sologamy is more of a journey towards loving yourself. And that solo lovin’ still leaves ample room for a partner or two.

One of the more popular solo marriages took place in 2017 when an Italian fitness instructor named Laura Mesi threw an extravagant wedding for herself, complete with seventy guests, a white dress, and a cake crowned with a solo woman statuette. The finale? A honeymoon to Egypt. She threw herself this wedding because she believes “you can have a fairy tale without the prince.”

This certainty in herself doesn’t mean she’s written off romantic partnerships. She said that if she finds someone to share her future with she’ll be “happy,” but that her “happiness does not depend on him.”

That trust in her ability to fulfill herself is something we can all take cues from, married, partnered, or single.

With sologamy, we have room to grow

Looking back at that bonfire in the North Florida woods, I realize now that I’d been thinking about that night all wrong. The reason I’d felt so much resistance to these artists’ marrying themselves had nothing to do with sologamy. I resisted because I didn’t love myself enough to surrender to my goals. Now, I think I’m ready.

I’m polyamorous; if you ask me, that means I’m a prime candidate for sologamy as well. My husband and I already take on lovers together; why can’t I commit to loving myself? I’ve already gotten started. For the past three months, I’ve been taking myself on weekly dates to deepen my relationship to my inner artist. The first date, I felt nervous, blushing, like I might somehow run out of things to say. These past few months, I’ve learned more about myself than I thought there was left to discover. And in the process, I’ve begun trusting myself with my future.

Like fate, as I’m writing this, my husband is practicing his cello in the same room, making music as we self isolate. My favorite version of him is this one: absorbed in his art, barely registering my presence. Listening to him play as I type away, I’m realizing something: my perfect relationship includes being second fiddle to his cello.

Because shouldn’t we yearn for companions who love and trust themselves? I hope my partner marries himself one day, and throws himself into his cello’s arms. As for me, I’ll dive right into my own sea of novel manuscripts and voice acting auditions. And as sologamists, we’ll do it side by side.