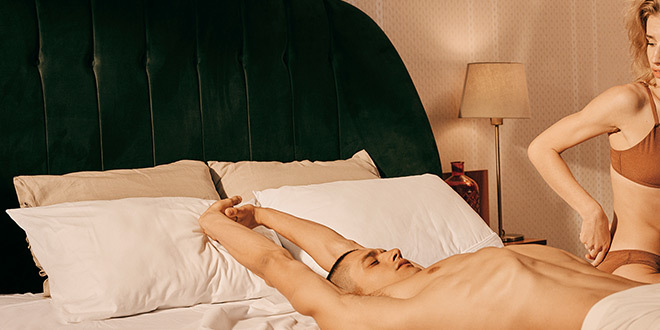 It was also found that women in a relationship were just as likely as single women to have a sexy toy in their nightstand. These women reported having greater levels of arousal, increased self-lubrication, and were more prone to orgasming.

Many of these men used vibrators to stimulate their partner’s clitoris which, in turn, increased their arousal.

How can you incorporate it into your play time? Have your partner lie down comfortably, and allow them to tell you where they’re in need of some ‘relief’.

For men specifically, massaging the area in the moments leading up to orgasm helps to intensify the climax.

Engaging in a little self-love whilst you show and explain to your partner what feels good can not only educate them, but also cause intense arousal, and ultimately, better foreplay.

A couple’s ring (oftentimes called a ‘cock ring’) is the perfect way to enhance the sensations of sex for both partners.

This kind of toy is worn by him, and placed on the shaft of the penis when flaccid. Then, when he becomes hard, he’ll experience a stronger erection while feeling the sensation of vibrations.

This is called a couple’s ring despite being worn by him because, once your lovemaking shenanigans have begun, she too will benefit from the vibrations.

Another way to spice up your sideways tango is to use a handheld massager that sits comfortably in between you and your partner during sex. The LILY 2 is an external toy that fits in the palm of your hand… small, but powerful.

To use this toy, you’ll nestle it between you and your partner’s body during missionary, or with the tip of the toy against her clitoris when she’s on top. It has eight stimulation patterns, so it’s all about finding that perfect rhythm that enhances your pleasure during intercourse.

If it’s more specific ideas that you’re after, these three sexy activities will surely cause a bit of a buzz.

And if he wants to take control, he has the satisfaction of knowing that he’s giving her double the pleasure…  at the same time. Win.

A much sexier game of remote wars involves two vibrators, one for him and one for her. And instead of fighting over a TV channel, you will challenge your partner to see who can withstand the most pleasure.

You can just run with your imagination and make it as thrilling as possible for both of you. There are no universal rules, which makes it even more exciting.

Last but not least, try your hand at the TIANI 3 remote-controlled couples’ massager worn by her. It works by inserting one arm inside, while the second arm stimulates the clitoris.

Grab your partner and get yourself comfy in the missionary position. In this way, the vibrations will extend down the length of him, providing both with some seriously sensual lovemaking.

This toy is bendy to suit all body shapes, and the SenseMotion remote allows you to adjust the intensity with the flick of a wrist. Admit it, wrist action never felt so sexy with this nifty device for couples.