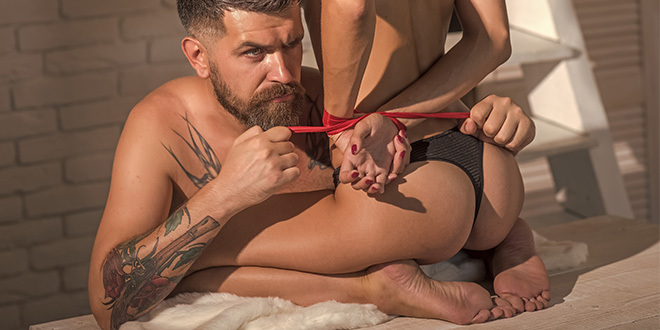 What Qualities Make a ‘Good’ Dominant?

Not too long ago, we published an article entitled, What Makes a Good Submissive? Now, we’re flipping it on its head and asking the question: What makes a ‘good’ dom?

In actuality, there is no real definition of what makes a dom or a sub ‘good’ or ‘bad’. It’s not as easy as being awarded a gold star for getting an A on a test or being sent to the naughty corner after continuing to chat after being reprimanded not to (although a naughty corner may or may not be appropriate in this context).

What makes a dom or a sub ‘good’ really does depend on the dynamic that two people share, among other things. (this relationship is often referred to as d/s (dom/sub.)

Then again, there are universal ways in which people should be treated! And so, we’re going to outline the attributes, characteristics, and gestures that are commonly synonymous with being a ‘good’ dom.

Before we dive in however, let’s get the basics out of the way…

And despite the fact that power plays a big role in this kind of lifestyle, there is generally a lot of respect, nurturing, and communication that happens between those who are participating.

What is a Dom?

‘Dom’ is short for ‘dominant’ and it is, in short, when one person has full power, control, and or influence over another. A dom takes on the responsibility of leading, guiding, disciplining, and protecting its sub (submissive).

What is a Sub?

‘Sub’ as mentioned, is short for ‘submissive’ and it is, in short, the receiver of the control, influence, and discipline. A sub is someone who gives consent and conforms to the authority of another (their dom).

Either way, here’s a quick little guide on what makes a ‘good’ dom… take notes if you’re a newbie, or simply nod or shake your head if you know what you’re doing.

What Makes a ‘Good’ Dom?

Being a dom may seem easy, but it actually requires a lot of intuition, balance, intelligence, self-awareness, compassion, communication, responsibility, and respect.

Not only that, but the things that make one ‘good’ are also subjective depending on the sub, how one handles pre-defined boundaries and rules, and how they communicate with each other.

Objectively, being a ‘good’ dom encompasses:

Being respectful (when in public): whether the d/s relationship is solely for the bedroom or it’s practiced 24/7, a dom should be respectful of their sub at all times, but especially in front of others (unless otherwise stated). Being belittled or humiliated in public does not show respect.

Having a firm grasp of control and what it means: a dom whose life has passion, priorities, goals, and aspirations that they’re actively working towards can be an excellent indication of a ‘good’ dom. Self-discipline and self-control is an important aspect in the d/s relationship.

Keeping promises: being a dom is all about responsibility. If a dom proves that they can stick to their word, be reliable, and accountable, that is a great sign.

Sharing kinks: while this one is subjective, the success of a d/s relationship depends on whether both partners are actively interested in and intrigued by the same kinds of kinks, desires, and exploration.

Being open to criticism: a ‘good’ dom will have a nurturing and compassionate side, and in this way, they’re open to communication—be it praise or criticism. They’re also usually very inquisitive, and eager to learn and improve.

Creativity: some may argue that taking on the role of ‘dom’ is an art form. A ‘good’ dom will be inspiring, creative, fun, and playful. They’ll also realise that there is always room for growth, improvement, and new and innovative ways in which to enjoy the d/s relationship.

Kindness: one of the most important aspects of the d/s relationships, is aftercare. That is, after play time, the dom will cuddle, talk to, embrace, and or make sure that the sub is comfortable and happy. This is a way in which to show respect and kindness towards their sub, and to let them know that they will not be discarded after play time but rather, cherished.

Understanding: a dom will wholeheartedly abide by what their sub wants and needs. They will respect their boundaries and limits, and tailor the relationship according to the sub’s comfortability, willingness, and intrigue.

Selflessness: a ‘good’ dom will not focus solely on their own needs and gaining self-pleasure or satisfaction. It is about making their sub’s happiness and wellbeing a priority, and not acting in a selfish and self-fulfilling manner.

Intelligence: a d/s relationship is not only about physical action, but oftentimes mental stimulation and connection. This is why so many doms are highly intelligent, as they seek intense mental exchanges.

Self-awareness: a ‘good’ dom will be able to know their strengths and limitations. They have a firm grasp of who they are, what they want, and how they can achieve their goals while being open to learn and improve.

Trustworthiness: In order for a d/s relationship to flourish, trust is one of the most important factors. A dom must too prove themselves to their sub, showing that they genuinely care about and respect them. In this way, the sub’s safety and wellbeing is a priority for the dom.

A ‘good’ dom will gently influence a sub’s thoughts and desires, while being mindful and considerate. They will actively listen to their sub and learn from them in order to create a dynamic that is fulfilling, satisfying, and mutually beneficial.

In contrast, a ‘bad’ dom will mistake being dominant for domineering. They may come across as rude and hungry for control and power regardless of their sub’s needs. They will demand respect while acting disrespectfully, such as using threats, belittling their sub, or going beyond the sub’s limits.

Plot Twist: The Dom Doesn’t Really Have All the Control

Contrarily, it is actually the sub who holds all of the cards, as it is their willingness to give up full control that ultimately allows for the dom to have power and control.

A ‘good’ dom will have set boundaries with their sub to ensure that they are always comfortable and safe, and consent is a priority in the d/s relationship. A ‘good’ dom will not do anything that their sub does not want or desire, and they place the sub’s needs at the same level, or even higher, than their own.

Are you, or are you currently in a d/s relationship with, a ‘good’ dom? With the above information and additional studies, it appears as though you can consider yourself lucky, as ‘good’ doms truly do possess some great qualities, ethics, and intelligence.