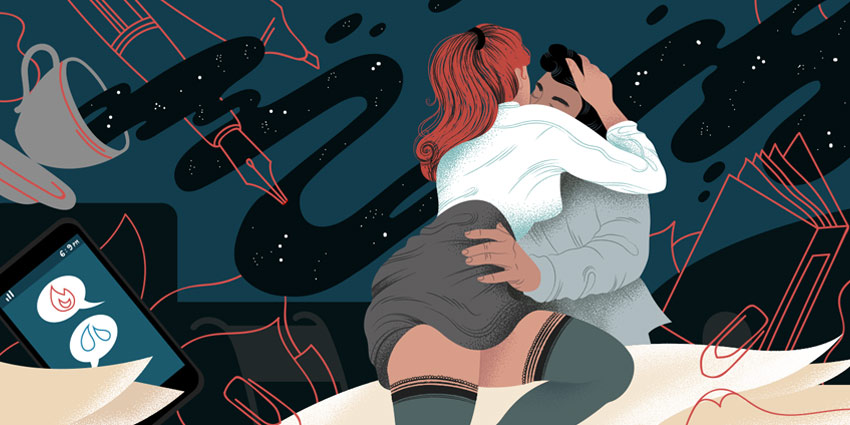 As bland, characterless multinational offices go, Sara’s could have been worse. She had long ago learned to tune out the indistinct hum of printers, copiers, coffee percolators, ringing phones and stifled chatter. It had become white noise, almost therapeutic when she allowed herself the time to concentrate on it.

But time was not something Sara had much of any more. Everything was urgent. Everything had a deadline. The office had become her life, and her life had become the office. Her routine was to wake up Monday, dress, eat, commute, work, return, wash, repeat. She may as well copy Monday and paste it through the week until Sunday, when she could spend her free time preparing to begin all over again.

Sara had lost her spark somewhere along the way, and she felt it. A vague feeling that she was missing something essential. Every time she left a room she patted down imaginary pockets, a subconscious bodily tick she had acquired somewhere in the last two years, as though she always felt she had forgotten something. That sensation was with her every moment of every day. But it wasn’t her keys she had mislaid. It was something far more fundamental than that.

Sure, she had her little rebellions. Every now and then she would slip out for a cigarette and enjoy its badness. Perhaps once a month she would wear something sexy beneath her charcoal trouser suit, something only she could know and touch. Her little secret, her little mutiny. It was only a little thing, but it made her stand taller, walk bolder and smile a little more than usual. She needed to protect it: to rebel to often would be to trample the embers, it would no longer be special.

But it was no longer enough. She had stopped counting the months since her last date, let alone her last fling. She wondered what had happened to her. She used to take risks. She used to be spontaneous. She was embarrassed that she had traded it all in for a T-shirt bra and a competitive wage. She wanted more than anything to reconnect with herself, and she knew it wouldn’t happen unless she took a risk and made it happen.

Today, though, she did feel special, and she would make it happen whatever the cost. She needed to open a valve and release the dangerous pressure that she’d allowed to build unchecked.

And then there was Mark. Mark was new, Sara had interviewed him for the job and had found herself uncomfortable during it when she realized she was flirting with him. She remembered blushing after she accidentally said “oh really…” when he had mentioned he was flexible in any position. At 27 he was five years her junior, smart, clean, arrogant and intelligent. Ever since the interview there had been something intangible between them, an awkwardness that belied attraction.

The mature thing would have been to ignore it, maybe even joke about it, and let it extend no further than a misguided kiss at an office party. But Sara wanted a break from maturity and Mark was going to provide it.

She glanced at Mark from her desk. He was sorting through papers at his own desk. She brought up her instant messenger and began to type.

Sara says: Mark. There is an emergency in the office.

Sara watched. Mark read the message and his brow ruffled a little in confused alarm. His eyes shot across the office and met hers. He registered to mischievous smile on her face.

Mark says: Hello Sara. What is the nature of your emergency?

Sara says: Very soon there is going to be an unannounced fire drill.

Mark says: …there is?

Sara says: Yes. Everyone is going to leave. Fast.

Mark says: so the office will be empty…

Sara says: two of us should stay behind to make sure everyone gets out safely. I just promoted you to assistant fire officer. Are you up to the task?

Mark says: There’s only one way to find out.

Sara stood slowly with a devious smile growing across her face, sauntered nonchalantly over to the wall, checked no one was looking, grabbed the lever for the fire alarm and pulled. The office suddenly became alive with noise, as obnoxious alarms began to screech and people began to clamber away from their desks.

“Everyone out, NOW”, demanded Sara over the urgent noises.

She stood by the fire escape door, held it open and pushed her colleagues out one by one, like paratroopers from a plane. Mark was last, and before he could leave, she slammed the door closed. It was just her and him in the loud, empty office.

She pressed her back against the door and took him by the tie, pulling him to her, and without a word, they kissed hard and urgently. He wrapped one strong hand around the back of her head, gripping her long hair, and pressed his weight into her.

The sprinkler system switched on and they were doused as they kissed, as though the heat between them might cause them to ignite. The cool water poured over them, drowning the fragrance of his aftershave and causing his white shirt to cling to his tall, slim frame. With one hand she explored his body, and with the other she unbuttoned her pants and slid her hand inside.

Mark stepped back, still holding her hair pressing her against the fire escape door, and watched her pleasure herself in anticipation of him. He listened to her quickening breath and the growing pleasure of her body as the sprinklers drenched them.

“We only have five minutes,” she whispered, almost to herself, “before the fire brigade arrives.” They locked eyes. “You need to fuck me, and you need to do it right now.”

She slid her suit pants down and kicked them off. She stood in heels, dark lace-top stockings shrouding her long creamy legs, silk suspenders and a lace thong with her hand inside, and her shirt and jacket.

With her free hand she quickly undid Mark’s belt and zipper, and found him hard, thick and ready. She pulled it out and stroked it as she stroked herself, and then pulled him to her, lifting her leg to his waist. He held Sara’s leg around him and felt her wetness as she guided him inside her.

She gasped as he took control and began to push slowly inside, little by little. She wanted all of him immediately, and she wasn’t prepared to wait. She began to grind up and down him, filling herself with him, holding him at the back of his neck for leverage and the other hand still pleasuring herself, enjoying the firmness of his grip in her hair.

Mark lifted her leg a little higher so she was on tiptoes, and stroked long, satisfying strokes in and out of her. Sara could feel his strength, he was essentially lifting her off the ground and pressing her into the door like he was going to fuck her through it.

Her legs became weak as a familiar wave of pleasure rolled up her body, and she began to meet his thrusts with her own as she edged closer and closer. The waves of pleasure began to mount and evolve into bodily convulsions that gripped Mark tightly as he entered her, bringing him closer to his own peak.

They grips tightened on each other, Sara’s fingernails digging into Mark’s neck and Mark’s fist pulling Sara’s head to one side by her hair. Sara’s free hand worked furiously on herself, her legs weakening further with every flick of her finger.

Their faces were both turned up at the ceiling, eyes closed, mouths opened, soaking wet and moaning loudly.

Finally, Sara allowed the wave to crash down on her and every muscle seized, hot convulsions shattering her whole body, breathing obscenities through gritted teeth. The convulsions gripped and massaged Mark within her, causing him to lose control, and he released a visceral growl as he climaxed inside her orgasm-wracked body.

Exhausted, they slumped into each other smiling under the water still cascading over them, the sounds of the alarms returning as their senses rallied.

They pressed their foreheads together and kissed. The fire brigade was arriving, it was time to go. With Sara, there was always a deadline.