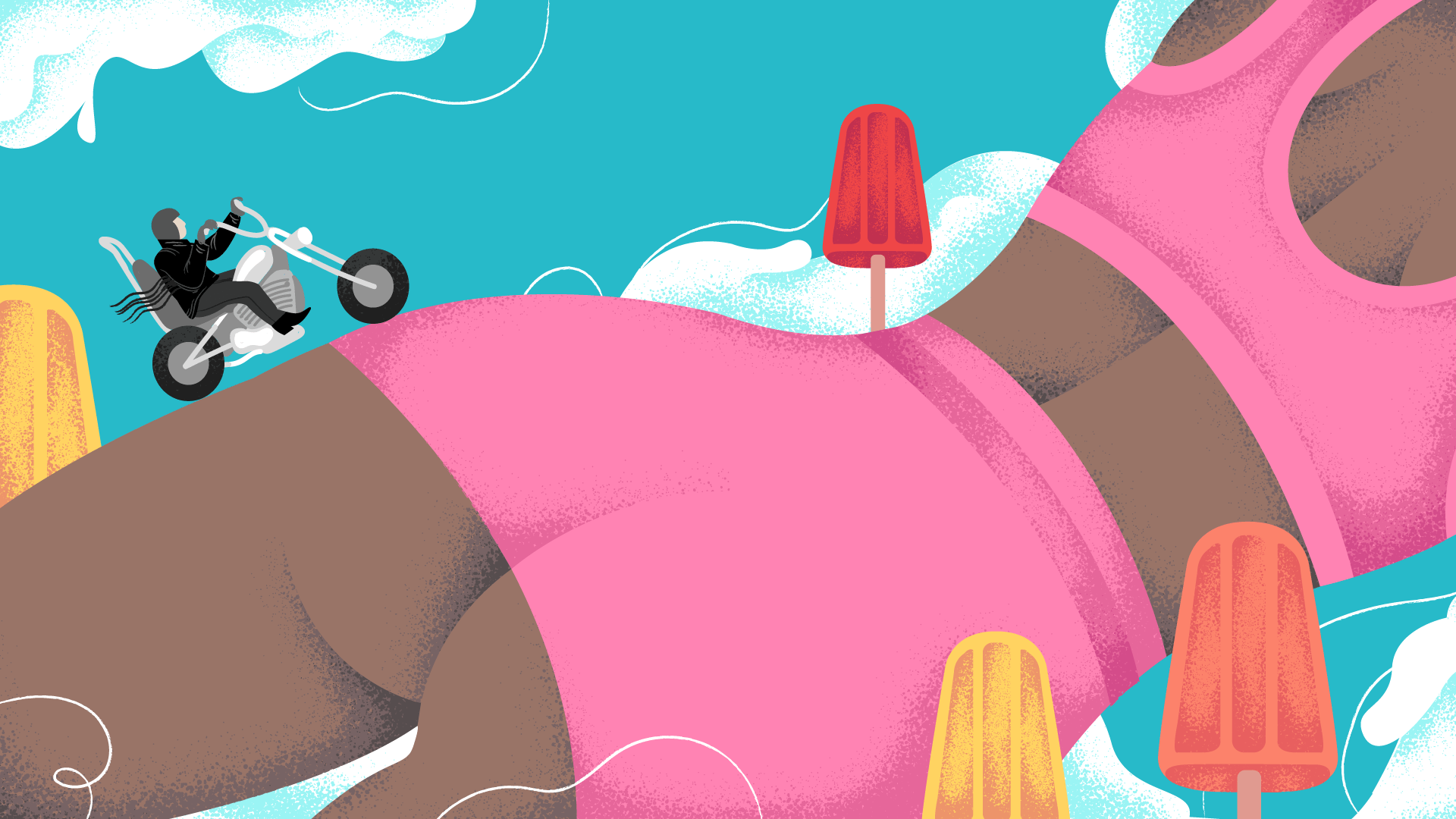 Peggy paused as she saw her reflection in a store window. Her hair was done up, and she wore a pretty cream and rose dress that was part of her uniform from the old-fashioned ice cream shoppe where she worked. She smiled, and then continued up the steps to her apartment.

As she stopped to unlock the door, the plastic bag holding a pint of ice cream swung from her wrist and hit her leg, announcing her arrival.

Jake stood up and smiled as she entered, pulling his long hair into a ponytail. His eyes were riveted on the fancy script of the bag.

She didn’t mind; just looking at Jake made her clit pulse. People might look at the pair of them in surprise, what with him looking like all he was missing was his Harley. Dressed all in black, as usual, with his flowing black hair, she was struck as usual by his beauty. People saw him as a rough biker. She saw him as the sweet, sensitive lover he was—as her baby with the sweet tooth.

He kissed her temple, and taking her wrist, asked her like he did every time she came back from the ice cream shoppe.

‘What kind of ice cream did you bring?’

Peggy smiled, as she opened the bag. Jake loved desserts, and he loved the unusual savory ice creams they made at the store more than anything.

‘Red pepper ice cream,’ she smiled, handing him the bag.

Jake grabbed the bag from her, and she went into the kitchen to place the takeout that she bought on the counter. From behind, even before he touched her, she felt his heat. By the time he touched her backside, she was infused with him. His scent and the heat of his skin through her clothes. She leaned back into him and felt the coolness of the ice cream, just beneath her uniform.

‘Decadent…’ he murmured into her hair.

Peggy nodded, as he kissed her neck and took her hair out of its neat chignon. Her hair tumbled to the middle of her back, and soon was the only thing that covered her. She pushed her hair to the side, as Jake placed a scoop of ice cream on the small of her back. Feeling him lick the red pepper ice cream off of her back was a sweet sensation.

Licking the ice cream scoop off of her was his favorite thing to do. The small of her back felt frozen, until his tongue lapped at it. Each lash of his tongue was like liquid fire, and she arched in response to his strokes.

She could not see herself, but she knew she was miles away from the image of herself perfectly put together like a relic of the fifties when she was on her way to the apartment. Standing up, she felt her hair swing back against her shoulder blades. Jake pressed himself to her back, and she swooned at the weight of his belt against her ass. She backed up against him, and he slapped her bottom. He never used a belt on her and she was not sure that she would have wanted him to, but he knew how to use his hand to spank her and make her do whatever he wanted her to do.

He had almost spanked her clit, and she was glad he had not because she would have exploded. She knew people probably thought he was rough, just because of how he looked in contrast to her. Her in cream and rose—well nothing now—and him in black leather. People probably thought he was into whips and chains, and not that he would lick between her legs like he should have licked the red pepper ice cream. Slowly, over and over so that he did not miss a spot.

Peggy closed her eyes and buried her face in her folded arms on the counter. Jake did not spank her, but he parted her cheeks like she was the red sea. He licked her pussy, and told her how savory and sweet it was…before he kissed her asshole which she assumed looked like a tight rosebud. She felt every part of her pulse as he first kissed, then entered her hole with his tongue. He knew he could make her come from kissing her ass, and when he put his tongue inside her…he knew she could come at any minute.

Her thighs quivered under the pressure of pleasure. Jake caressed them as if that would make them stop, but it made it all the more harder for her to stop. He pushed his tongue in so deep, that she saw a flash of light before she came so hard. She pounded the counter with her fists and elbows, and punched the already deflated bag she had bought the ice cream in.

‘What are you bringing me tomorrow?’ Jake mused absently, as she tried to catch her breath.