Sex is anything but black and white. It can go from passionate red to happy yellow and shades of blue, depending on your preferences and taste.

And for those who enjoy colouring outside of the lines when it comes to sexual pleasure, this is not a haphazard and random inclination. In fact, there are valid psychological and physical reasons for it.

So, if you like it rough in between the sheets, here’s the 411 on why you like it, how it can make or break a sexual relationship, and how to enjoy it safely.

Ready to dive inside your inner thoughts and sexual drive?

The Psychology Behind Rough Sex

Do you love going on the scariest rollercoaster at the amusement park? And do you find endless thrill in horror films that make you grab the covers and place them over your eyes in fear? Well, the same science applies to rough sex.

All of these scenarios present an element of terror, but they too hold the promise that everything will be OK in the end. The rollercoaster will come to a stop, the movie will finish, and if you’re in a trusted relationship, rough sex will be a fleeting moment of intense passion.

In short, as humans, many of us are attracted to dangerous situations.

But there are, of course, other factors that influence this type of play time.

Urgency: When you have a rising desire for your partner, the urgency sets off an intense need for immediate satisfaction in the brain.

Trust: For both men and women, trust is a huge factor when it comes to having rough sex.

When someone is pinned down and participating in forced consent, trust is an imperative element. Both partners must know that their play partner will stop when asked to.

Psychological Health: Those who enjoy it rough tend to fear that they might have some kind of psychological disorder of some sorts. But rest assured, this is not the case.

In fact, Dr. George Simon, PhD in clinical psychology, revealed that – as long as your bedroom antics don’t transcend into your everyday life, you’re 100 percent A-OK!

Angry Sex: Why is it So Good?

Angry sex has the component of strong emotion. And when you’re attracted to someone physically, but simply cannot stand everything else about them, your brain has a way of blocking out those negative feelings and focusing on the visual stimuli sitting before you.

Four regions of the brain will then release a slew of hormones, such as dopamine, serotonin, and adrenaline. This powerful cocktail will make you feel good, happy, rewarded, and ready for action.

So, what do you get when you have a good looking person with a rotten personality? Strong sexual yet hateful or angry feelings toward them. And by engaging in sexual activity with them, it releases some of the tension and emotions that you may not want to actually deal with.

But why do we use sex as a means to express our emotions, good or bad? It actually stems in childhood, says Dr. Fran Walfish, a psychotherapist.

For example: if a young girl were to have an emotional-absent father, she may settle for less in her search for meaning, acceptance and love.

In time, she will realise that these men aren’t giving her what she needs, and this in turn, leads to anger which is expressed sexually.

Interestingly, this isn’t just an issue of gender. It has been found that young boys who don’t experience a lot of affection and love from their mother often seek out women who are less than desirable.

After around four months, they start to notice the undesirable behaviour, and may feel resentful and angry towards their partner.

Can Rough Sex Make or Break a Relationship?

If both partners actively enjoy rough sex and experimenting with dominance and submissiveness, this can actually bring them closer together. It’s no secret that sex is a key ingredient when it comes to having a successful and happy relationship.

But what happens when two people have mismatched sexual desires and fantasies? Many a couple have broken up or divorced over sex-related issues, but this really doesn’t have to be the case.

In fact, licenced marriage counselor and relationship therapist, Isadora Alman says that there are a few solutions to address this problem:

Compromise: According to Alman, couples who experience mismatched sexual desires should “have what they want elsewhere”. That is, to compromise and custom your bedroom activities in such a way that both partners can fulfill their needs.

An example of this would be affection or emotions. If one partner feels one or both of these aspects are lacking in their relationship, they can be met through embracing friends, family, or their children.

Additionally, both partners should consider being willing to accommodate their partner’s needs from time to time. This can only strengthen a relationship, and bring pleasure to both partners.

Consider an open relationship: An open relationship is having multiple sexual partners with the consent of everyone involved. If this is something you may feel comfortable with, it could be a great solution to a big problem.

The art of enjoying rough sex is if both partners are completely into it. The act of rough or forceful sex is like a game of consensual/non-consensual. It’s considered a taboo, possibly even wrong.

But if done between two partners who actively enjoy the act, it can actually bring about more trust and closeness between the two. It can also be seen as an act of affection, desire, and endearment.

With that, here are a few ways you can create a safe and healthy space for some raunchy rough sex:

Talk to your partner beforehand: By doing this, you are setting limits, gauging each other’s responses, and seeing if this kind of sex intrigues both of you.

To practice rough sex without talking about it beforehand could lead to miscommunication, and an unsafe space that could have been avoided. Both parties need to be open and honest about their wants and their limits.

Create a safe word: It may sound cliche – like something you’d see in a movie, but to have a safe word is not just about screaming an odd word to end a sexual act. It also adds to the suspense and ritual when it comes to your sexual experience.

Remove feelings of guilt: Oftentimes, especially for women, people feel guilty about wanting something sexual that could be considered morally wrong.

As mentioned, participating in rough sex doesn’t mean you’re psychologically corrupt. Nor does it mean that you are doing something ‘bad’.

Confidence: This one can be difficult to achieve, but it also comes with great trust in a partner. When you feel sexually confident, you’re comfortable and you don’t have the fear losing control at any time.

After care is the practice of cuddling, embracing, or talking lovingly with your partner after sexual activity. It’s a way in which to connect and feel safe after your passionate fun.

Having said that, it’s important to know that sex should always be consensual between two adults. If it is not, it is rape. There are no blurred lines when it comes to this matter.

What is Unhealthy Rough Sex?

So,to sum up: no there’s is nothing fundamentally wrong with you if you enjoy rough sex. Yes, rough sex can equal love. And sure, there are underlying reasons why love it so much.

Time for a bit of introspection, wouldn’t you say? 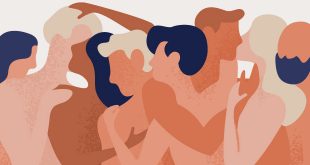 5 Things The Smithsonian Taught Me about Sex