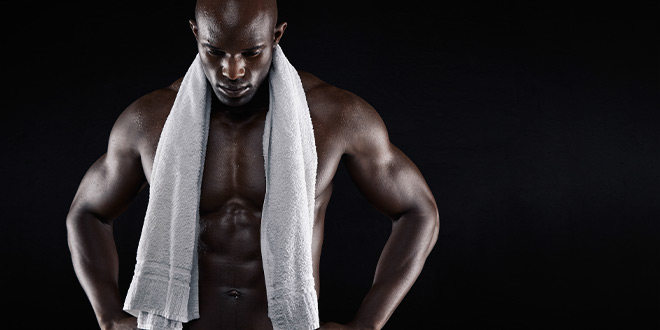 “You know that’s not my thing, Phillip.” He said, shifting forward, hands planted either side of his thighs. “But thanks,” he chuckled.

The towel over his lap folded forward, teasing exposure. He made no effort to adjust it.

“I suppose other guys have asked you the same thing,” I said, returning the chuckle and covering the momentary embarrassment of asking. But now it was out there. The worst was over.

He glanced at me through the steam. “Couple of times I guess,” he said, nodding and looking away.

“One of them. The other was a guy from… it doesn’t matter. No one like you and Janice though.”

“I just mean, conservative, I guess.”

His eyes drifted to my feet, my knees, the abs, arms and shoulders he’d created, my eyes, then away and forward again. Involuntary spasms, I began to thicken.

“Are we conservative?” I asked, almost wondering aloud.

“I’ve been to your house, remember? Yeah,” he snickered, his back arching powerfully, stretching, chest swelling, continuing the exposure; pubic hair shaved tight, dramatic tan line, the base.

His eyes caught me and moved on, collapsing back into the steam, the long ropes of muscle relaxing.

We breathed the hot, wet air, beads collected on our skin.

He continued looking forward, into the thickness that surrounded us, his large, sculpted feet shod in flip-flops planted firmly on the tile floor.

“Yeah, I did.” He said. “That was a bad idea.” He began rocking slowly back and forth, the towel on his lap slipping by fractions of an inch down his tightly muscled thigh.

“What happened?” I said. I adjusted my growing erection under my towel, peeled my scrotum off my thigh.

“I wasn’t at my best.” He said, exhaling. “I like guys. I mean she was beautiful but the whole thing just ended up … frustrating. I wanted him, but that wasn’t happening. He might have been down, but not with her there. I think she would’ve freaked a little.” A knowing glance. “And then it just ended.”

“Plus, I lost a client. It was a bad idea. I should’ve asked for money. Like a prostitute. That would’ve changed things I think.” He said, almost musing. “I could’ve fucked her for money.” A level gaze on me now. “Plus, I think he’d have liked it. Paying for it, I mean.”

A single eyebrow arched as a grin appeared on his face. “You wanna pay me to fuck your wife?” He chuckled and looked away, rocking slowly. He drank from his water bottle.

His cock was fully visible now, lying between his legs on the towel. Was it getting hard? It had to be. I drank from my water bottle, the top of my chest filling with blood pressure.

“We’re already paying you.” Cool, measured, watching for a reaction.

“As a trainer.” He said, the indignation thinly masked. “But she hasn’t been around in weeks.”

“Oh, I remember.” Something nervy, dismissive in the corner of his mouth.

“She came home and told me about it, like someone who just met their favorite celebrity.” I said.

He turned to look at me, to acknowledge it. Then his gaze slid away again.

He said nothing. Rocking slowly.

“She’s not embarrassed that she wants you.”

His eyes came to me again.

“She’s embarrassed that she wants you and can’t have you.”

“So now you have to fix it?” He said, studying his long toes as they flexed and contracted against his flip-flops.

It looked full now; long and muscular, vibrant. The head was wide, delightfully out of proportion to the shaft, a perfect mushroom. Of course, Janice wanted it.

“We actually have a bet.”

His attention snapped to me.

“Oh, yeah?” He said. His jaw loosened. He stopped rocking and leaned back against the wall. He wanted to look casual, impassive. An unconvincing smirk tried and failed to crease his mouth.

I began slowly rocking in the heat, my hands planted on the tiles next to my thighs. My erection was beginning to tent the towel over my legs. His eyes found it. He reset his jaw, slack again. He breathed sharply in the through his nose, gliding his palms over his wet hair.

Minutes in the heat.

“Are you getting hard?” I said.

He looked straight forward. He said nothing.

“You too.” He responded.

“Why do you think you’re hard?”

His cock was now rigid between his legs, full, hard and hovering above the towel beneath him in a gentle arc as if the big head was floating, tethered only by the shaft.

“You know.” He said, looking forward, his jaw flickering between tense and slack.

I stood and his eyes were on me as he remained against the wall, resisting, sweat in rivulets following the channels of his form.

“I’m going to shower, clean up, cool off then come back for round two.” I said, as I walked toward the door. “What have you got going on?”

“Sounds like a plan.” He said, leaning slowly forward, covering himself.

I showered cold for a long time until my erection had shrunk to a little sleeve of foreskin in a nest of thick, dark pubic hair. I shivered, and cut the water, cooled.

I wrapped a towel around my waist and walked toward the steam room, drinking deeply from a water bottle. He was sitting on a bench outside the room looking at his phone, a fresh towel wrapped around him. I pulled two fresh towels from the rack, threw them over my shoulder and sat next to him.

“Good shower?” I said. “Wash everything away? Clean? Pure? Ready to sweat again?”

His head lifted and turned slowly toward me, pulling his eyes away from the adhesive of his phone. Two huge, blue, bright orbs, perfectly spaced under a strong, straight brow framing his aquiline nose, settled heavily on me. Tiny muscles contracted almost imperceptibly at the corners of his eyes. Urgent thoughts flitting under the surface. A sprite of electrochemistry skittered through my diaphragm.

“Make sure you hydrate.” He said, a dimple appeared and faded in the hollow of one cheek like a trick of light.

“Always important.” I raised my bottle and sipped.

“Especially at your age.” He said.

Dimples, friendly and different appeared in thin concentric arcs framing his mouth, softening his gaze to something almost like tenderness. Momentarily guileless, like an open window on a summer night. Private, but not secret.

He held my eyes with his, even as I nodded and grimaced, acknowledging the gibe, accepting the compliment, holding it carefully as the vulnerable offer it was. His eyes traveled quickly over me as I drank.

His expression had dissolved to serious, his eyes wide, gravid with curiosity.

I held his gaze for half a beat then shifted gently downward to the field of fresh white terrycloth stretched tight as a drumskin over his legs. I sipped again and flipped the lid shut on my bottle, using the loud plastic snap as punctuation.

I heard him exhale deeply as the steam room door closed behind him. I followed.

A stooped old man bundled in steam-soaked towels pushed past me as I entered. Inside, a second old man was slowly leaning forward looking for an elusive center of gravity that would allow him to stand upright. I held the door as he finally shuffled out leaving Jason and I alone in a thick atmosphere of eucalyptus flavored steam.

I pulled a spare towel from my shoulder as I entered, stopping in front of him. Resting on his hands again, he looked up. He was exposed and nearly hard again. I leaned forward, placing a foot on the bench next to him, exposing my own thickening cock, and slid the towel over his head, around his neck. I moved closer as I began slowly twisting the towel like a bread tie until it reached his throat.

His eyes checked the room. The door. Fixed on me.

I grasped the towel in one hand and pulled us together feeling his resistance fade as our faces drew closer until our noses were inches apart.

“What do I want?” He said, in a voice not as confident as he intended, a quake of ripples in his jaw as he fought for control.

I twisted the towel around his neck, pushing him back against the wall.

I released the towel from my waist. His eyes fixed on my erection. I was fully hard, the head of my cock peeking out from a receding sleeve of foreskin. I leaned forward, reaching down between his legs, wrapping my fingers around him as I twisted the towel. His head was fast against the wall, his eyes fixed on my cock like the eyes of the Mona Lisa.

I brought my face to within inches of his, loosening the grip of the towel, blood flowing freely again.

“False starts, mistakes, regrets.” Slowly twisting again. “Surprises, love, ecstasy.” I could feel him swelling in my hand. “That’s the madness, the joke, the secret we carry around inside but can’t decipher.” Slowly, I stroked.

I touched my lips to his. Swollen, wet, slippery with sweat, tasting the need, the heat, an unburned fuel on his breath.

“The only way out is generosity.” I breathed the words into his mouth.

His tongue tasted my lips, tentatively then urgently. I lingered in our exchange. Then slid away.

Moving beside him, I sat, still holding him in my grasp. A leash around his neck, the leash between his legs.

“Do you think I know what you want Jason?”

He nodded, his eyes fixed on me, his legs rigid, hands behind his back. I continued to slowly stroke his slippery length.

“Can you give me what I want?” I twisted the wet towel at his neck.

His eyes grasped for my sex. He nodded.

I studied his cock. It was so close. I slid my hand up under the engorged head and squeezed, fluid gushing from the tip. I gently gathered the taut skin of the frenulum, the throat of his cock, between my thumb and finger and began to twist and pull as I wrung the towel tighter.

A full but strangled moan escaped his throat, muscles rigid, his body began to flex. His cock swelled and began to spasm. I twisted the towel as hard as I could and lowered my mouth over him, pushing the fat, spongy head to the opening of my throat, sealing my lips around him.