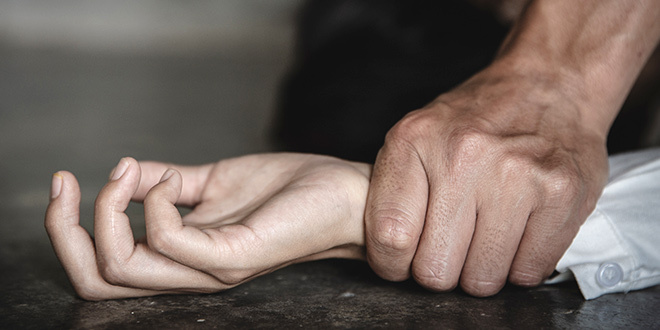 Fantasies; those delicious little half-truths we whisper to ourselves which get our wheels turning and our sexual appetites whet. Perhaps calling them “half-truths” is a euphemistic stretch—but fantasies are never so bound to facts and figures as we tend to be. That is part of why they’re a delightful escape from our day-to-day realities (and day-to-day sex)!

Fantasies can be as diverse as the people who engage in them. There can even be a variety of fantasies within the mind of one individual. Some fantasies are extravagant, highly-detailed, otherworldly imaginings. Others, hastily drawn up, are merely plausibly realistic drafts, meant only to supply a “quick fix”. There are even those which are so ordinary, so universally “acceptable” that they have become almost comedic tropes—and then, all the way at the far side of the cafeteria, where no one wants to sit (or even be seen), is the rape fantasy.

What is a rape fantasy?

The term “rape fantasy” generally refers to a fantasy (that is, an imagined scenario) in which the person having the fantasy imagines being raped, overpowered, or forced into a sexual act or sexually compromising position. Now, bear in mind, those terms can all mean very different things, but the important take-away is that it is a fantasy which hinges on the basis of imagined non-consent.

Rape fantasies and real-life rape are two completely different things. A fantasy is something created and controlled by you—it has nothing to do with a real-life circumstance imposed on you by another. Fantasies are pleasurable because we tailor the imagined experiences perfectly to our desires, without the pressure or consequences of having to actually live through them.

What makes fantasies “sexy” is that there are no harsh consequences which result from them because they don’t exist in the real world. Consider some of the most ubiquitous sexual fantasies in real life context. For example, the professor/grad student trope—there’s nothing sexy about getting fired or expelled for inappropriate conduct. If you look at the pizza deliveryman/bored housewife fantasy, in real life, there’s nothing sexy about getting caught by your partner, and subsequently having to file for a divorce. Having a fantasy does not mean you want, expect, or would enjoy the premise of your fantasy happening to you in reality. Fantasies are merely a safe space to explore your sexuality and imagination without incurring damages or reaping real-world consequences.

Now we know what rape fantasies don’t mean, but what do they mean?

Well, evidently, not much. Michael Castleman, a California-based sexuality journalist, wrote a piece compiling data on the commonality and implications of rape fantasy which showed that the prevalence of rape fantasy among women was surprisingly widespread. In a 2008 study, it was found that roughly 44% of women have fantasies of forced sex, and for about 13% of those women, it is their favorite sexual fantasy. By these statistics, rape fantasy is just as common among women as wearing makeup to cover up perceived flaws.

With that kind of prevalence, researchers are having a hard time making connections about just what all of these women who engage in such thoughts have in common. In fact, there’s an astounding lack of evidence regarding what rape fantasies have to do with a woman’s personality and broader sexual tastes. It is with that in mind that Castleman (in his aforementioned article) concludes rape fantasies are “no different from any other fantasies” and that they “imply nothing about one’s mental health or real-life sexual inclinations”. In other words, hakuna-matata.

Are rape fantasies damaging to women?

Clinical psychologist Dr. David J. Ley, in his article “The Rape Fantasy: Does it actually mean anything?”, suggests that women—including those with a history of sexual assault—who harbor rape fantasies are not reinforcing trauma by engaging in such fantasies. He asserts that it may actually be a way for them to safely revisit clearly unsafe circumstances and mentally manage them; placing power back in themselves where they were once powerless. Therefore, rape fantasy may not be unhealthy as the stigma would suggest. Rape fantasies may actually help women forge on from trauma by reinstating autonomy and reframing their histories. This potentially allows them to define new narratives which they control. In this way, rape fantasies may serve as a reclamation of sexual freedom.

How can a rape fantasy be safely incorporated into intimacy with a partner?

Engaging in this type of fantasy with another, like any other exploratory sexual encounter, requires tons of communication. It also requires a partner you know and trust immensely, and who will definitely respect your limits. But, before you consider what to say to your partner, you’ll need to have a really honest talk with yourself. Be prepared to spend a fair amount of time reflecting on your rape fantasy and whether (and how) you should ask another to partake in it.

First, you will want to be truthful with yourself about your limits. For this, you’ll want to ask, “What would I find pleasurable?”, “What would I find to be too much?”, “What might I find traumatizing?”. These questions are important because you want to ensure you are preparing for an enjoyable time, but are also thinking about ways to avoid any psychological or emotional damage during consensual non-consent. Later, but before you engage in consensual non-consent with someone else, you will want to discuss limits and boundaries with them, in which you should ask them the same questions to ensure the experience is mutually pleasurable and nontraumatic.

In considering your boundaries, it’s important to identify potential emotional triggers or sensory experiences that would initiate uncontrollable fear or negative thought sequences. Take note of these, if there are any. You’ll want to later identify these to your partner so they don’t unintentionally emotionally harm you. Likewise, when eventually communicating with your partner, you should ask them to relate to you any activity or experience which would be a no-go for them, so you can ensure their emotional safety, as well.

In addition to asking questions and identifying triggers, it is crucial to discuss consent, safe words, and nonverbal safe signals with your partner. The discussion of consent is more complex here, because we are dealing with consensual non-consent. In other words, you may be displaying all the signs and symptoms of not wanting to engage with your partner while thoroughly wanting to be intimate with them. For this reason, it is vital to have a clear delineation of what you do and don’t consent to, ahead of time. Do you want them to restrain you? Do you want them to call you humiliating names? Or, are these activities strictly out of bounds? You’ll want to communicate such issues with them beforehand, in a nonsexual setting.

You should also agree upon a safe word. A “safe word” is a word that can be uttered at any time during an encounter or “scene” which will instantly alert those involved that something is wrong and they must respond accordingly. A good safe word is a word which would not usually be used in the context of sex or play (like “hippo” or “banana”) but which is also memorable and easy enough that it can be thought of, and pronounced, under duress (like a person’s full name, or, simply “red”). There are different systems of safe words, and you should choose the one that works best for you and your partner.

Some people only use one safe word, which, once used, immediately stops all activity to ensure the safety of all participants. Others may prefer the use of two or three safe words, like the “traffic light” system. In this method, the word “green” is used for “All clear, go!”, “yellow” expresses “I’m nearing my limit, please slow down or change the progression”, and “red” means “We need to stop, now”. It doesn’t matter which system you and your partner choose, so long as you are both confident in how and when to use them. You should also both understand how to respond once a safe word is called. It’s essential that everyone understands the safe word can be called at any time, by any person, and it will be respected and accepted without retaliation by any party.

For scenes which involve the use of a gag or activity restricting the ability to speak (such as consensual forced oral) safe words will obviously be rendered ineffective. In these instances, you and your partner will need to preemptively choose a nonverbal safe signal. A nonverbal safe signal is used in the same instances a safe word would be used and can be displayed by a system of taps, a show of fingers, or a particular, noticeable gesture.

If a person is not blindfolded (so they can locate a safe surface to tap on) but is gagged, a double tap on a surface or a person can be used for “I’m done”. If a person is blindfolded and gagged, they can use a gesture such as one fist up, or arms crossed in an “X” for “stop”. If a person is blindfolded, gagged, and bound (but without the individual fingers being bound) they can use a show of fingers to communicate, for example, three fingers for “three strikes, you’re out”. Whichever nonverbal safe signal is used, it should be applicable to the exact specifications of all parties’ conditions. A safe signal can’t help if you can’t show it, see it, or notice it.

You and your partner may choose to have check-ins with one another throughout the scene, especially if you are concerned with the intensity of play or communicability of the safe word or signal. During check-ins, gags and blindfolds can be gently removed to look into the eyes of a partner and ask them outright, “Are you ok? Do you want to continue?” This is commonly done when partners are new to each other or new to the “play” they’re participating in.

Consent, safe words, safe signals, and check-ins should all be discussed prior to physically engaging with your partner to explore your fantasy. Being communicative with your partner ensures that everyone participating feels safe and understood going into the experience. It also reduces potentially dangerous ambiguities.

For this reason, it’s imperative that you make arrangements for any safety tools you may need: condoms for penetrative sex, safety scissors if someone is being bound, glucose tablets (or chocolate) to bring blood sugar back up if rigorous physical stressors are expected—you get the idea. Obtain the necessities in advance. On the big day, keep them nearby and readily accessible, so they’re available when needed.

After discussing boundaries, triggers, consent, and safe words or safe signals, you and your partner are free to discuss the juicy details of how you see this fantasy translating to desire and how you want it brought into reality. That’s when the real fun starts! The two of you can decide on how to set a scene and let your creative juices (and maybe other juices!) flow. Be sure to cover arrangements for aftercare as well!

Rape fantasy can add an element of excitement to your sexual desires. It doesn’t have to be this taboo secret shrouded in stigma. It is a fairly normal—and perhaps healthy—process between the ears, and can even be safely incorporated into your intimate moments between the sheets.

Accepting our fantasies helps us embrace parts of ourselves often left in the shadows. Sharing our fantasies and engaging in roleplay allows us to be vulnerable with our partners and (with appropriate timing and communication) can enhance our relationships and our sex lives. So, don’t let societal hang-ups get you down. As long as you’re not hurting anyone, feel free to be you and fantasize the way you do!