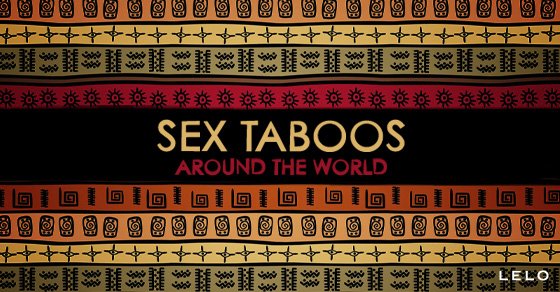 Sex Taboos from Around the World

No matter where you’re from, the culture you belong to has taboos surrounding sex and intimacy. And while the world is full of crazy sexual practices, we can all revel in our weirdness together, because it’s all totally objective when you compare it to what you know.

With that said, the following taboos aren’t necessarily crazy, however they are ones that elicited an audible ‘ohhhhh… kayyye’ during the research stage for today’s article, which outlines some sexual taboos from seldom-represented cultures of the world. The taboos that we found had to do with when and where people could or should have sex, for example;

Night Time is the Right Time (as Mandated by God)

While many people enjoy a bit of frisky fun in the morning or the afternoon, odds are those same people don’t come from the indigenous groups of the Kuna or Semang, located respectively in Panama and Malaysia.

While people of the Kuna believe that a daylight dalliance is not in line with God’s law, the Semang claim it causes wicked thunderstorms that will drown innocent people, and the offending couple – so much for an afternoon delight.

Some taboos have to do with sex adversely affecting something seemingly unrelated to the act, sort of like pro athletes who forego lovemaking before a big game or during playoffs.

The Ganda people of Uganda forbid sexual intercourse before a battle, as well when the trees for making canoes is being processed – making that the only wood seeing any action in that village (heyo!).

Wood jokes aside though, imagine having to go three months without sex when hunting season gets started. If you’re of the Lepcha people of Northern Asia, that’s exactly what you’ll do after you’ve set your bear traps, making us think that turning vegetarian would be a good idea.

As far as Taboos are concerned, where you have sex is just as important as when you have sex. While getting intimate outdoors is so common as to be considered a rite of passage here in the West, the Bambara tribe of Western Africa believe that having sex outside will cause all of their crops to die.

Meanwhile, the aforementioned Semang people forbid having sex within their own villages, lest they make the spirits angry. This means that they not only have to leave town to get some, but they’ve got to do so at night just to get naughty!