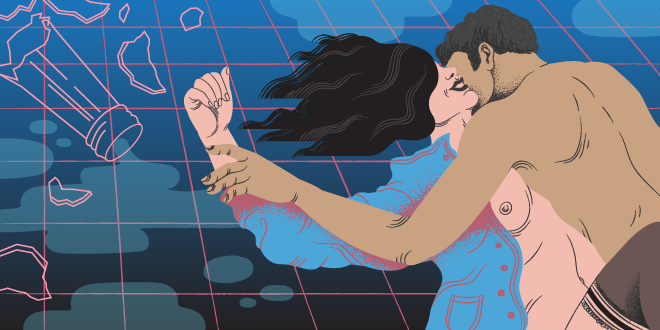 It had been a warm Summer night when we first met (isn’t it always?!). I remember the skin on my nose feeling tight from the day’s sun. My freckles were out in force. I had one of those soft grins going on that only comes with a day of drinking beers from the bottle in heat. As I’d waited to be served at the bar in town, I had felt someone’s hand on my elbow and then, “Hello you!”

I didn’t place his face straight away looking at him through the mirror at the back of the bar but there was no mistaking him when I turned around. I had known this guy. We’d had dinner at each others’ homes, called the other in the dead of the night for no obvious reason other than to catch up on the last couple of hours we’d spent apart, exchanged school notes and got ourselves in a state down the snicket with a bottle of cider and a pack of ten.

He’d been my shoulder to cry on and lift home when my first serious boyfriend dumped me, and I had been his the day he confessed his stronger feelings for me and I reaffirmed his place in the (best) friend zone. I had known everything about him, as he had me – over a decade ago – but the man in front of me that Summer two years ago? The one who’d grown up and who made me feel so unbearably shy that I kept looking at my feet? That was the night I had first met him.

In two swift strides, he’s up against me again and the thick air of the club hits me anew. His hand gently moves my hair away from my neck as he softly but firmly places a hand on my throat and plants a warm full kiss just beneath my ear. “You are… amazing.” I feel my cheeks flush and my head dizzy.

My body lets go of all of the tensions life put there and, for the first time in months, I am relaxed. He has my hand again but this time it’s more purposeful. We move quickly through a succession of doors; fast enough that the intertwined bodies that we pass on the way flit in front of my eyes like a flickering vintage film.

A heavy door closes behind me and we’re on our own in a largeish room with deep purple walls, more velvet curtains draped from corners to the centre of the ceiling, a small black sofa in the corner, and little else more apart from a large bed in the middle of the room with two chains at each end with cuffs. It feels as much like an expensive boutique hotel as it looks tacky.

“For fucks sake, I’ve missed you.” He crashes into me. Both hands around my jaw, fingers in the back of my hair, mouth hard on mine. I choose to ignore what he said. Feelings weren’t part of his arrangement. He tastes of whiskey and salt and heat and I’ll do absolutely anything he asks of me and my God, I’ve missed him.

His tongue leaves my mouth and he places a small tender kiss on my lips. The contrast and the cruelty take my breath away and then I’m ravenous. I clumsily search for his cock with my hand and feel frustrated at the rigidity of his jeans preventing me from being able to hold him. I’m opening his belt and snatching at his buttons until there is just enough slack to slide my hand in to free him.

I go straight to my knees and take as much of him into my mouth as I can, still too dry from my ragged breathing to take him fully. I look up at him as his head rolls back, eyes closed, mouth agape. A groan escapes from the back of his throat and I pulse at the sound. Each time my head moves back, I enjoy extra length of him on my return; each time more slippery than the last. His hands grip more tightly behind my head and as my lips reach his balls, I feel the tremor in his legs.

He’d let me finish him then. Months of him letting me in rushed stolen moments, with me going home still wanting, tell me this. Today is different. I need to feel him inside me and so I sit back on my heels, mascara running, and silently invite him to reposition me. He turns me over until I’m on all fours and he moves into the same position.

I tighten as the tips of his fingers slide under my knickers and he slowly pulls them aside, stroking me. It doesn’t play like a well-rehearsed move. It plays like it was designed only for me. It makes my head spin with a lethal concoction of how amazing it feels and the grief at the thought of being without it.

He slips a finger inside me, withdraws it quickly and feeds it into my mouth; the rest of his hand grips my jaw. My tongue flits around his finger until my lips squeeze it clean. I’m still reeling from it leaving me when, without warning, he puts it in my backside. I let out a quiet moan as his mouth lands on me and his tongue laps at my swollen pussy.

I reach behind me and pull his head closer, near smothering him as I push myself onto his face. The pace slows but he continues relentlessly. My head rolls. This is the scene I love the most. His other hand at my waist. I feel so utterly possessed by him. The feeling of being his is a tonic but it’s also poisonous. It’ll take weeks for me to get over it. I’ll resent him for it and then I’ll chastise myself. Feelings were never a part of the arrangement.

I’m so deep in my romantic fantasy, it comes as a shock when he thrusts his cock inside me. I embark on welcoming him with a squeeze every time he enters and within minutes he cums loudly. It makes me happy to please him but later, when I’m back in the car and my senses have returned, I’ll remember my naivety, and the final act of laying on the floor with him, head on his chest, his arm around me, will plague me for weeks. I should never have come here but I know, for him, no matter how hard I try to resist, I’ll come back again.