The Top 5 Sexiest Moans, Groans and Grunts from Wimbledon

It’s no secret that we think athletes are sexy. They’ve got toned bodies, fantastic endurance, they always give 110%…and they aren’t afraid to vocalize their pleasure, erm… rather loudly.

With Wimbledon in full swing, it’s been hard not to look at the footage of the top players in the tournament, or well, hear them, and wonder about how much gusto they put into their lovemaking noises. Below, we look at the some of the best (or just most enthusiastic) orgasm noises from Wimbledon. 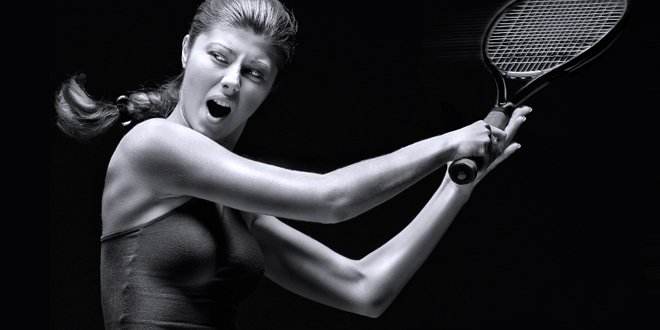 No one can dispute Maria Sharapova as one of best and loudest female tennis players currently competing. She first took a #1 world-wide spot at the age of 18 held that spot on five separate occasions, for a total of 21 weeks. She is one of ten women, and only Russian, to hold the career Grand Slam and is an Olympic medalist. She has also had her grunts recorded at 101 decibels, which is equivalent to a passing semi truck or a car horn from 5 meters away. She claims to have made such loud noises since she first began playing, and still is just as loud when practicing by herself.

While currently unmeasured, Rafael Nadal, a Spanish player with 14 Grand Slam titles and currently ranked as #10 worldwide, is the commonly cited male example of extreme volume. In the debate surrounding tennis grunting and whether it counts as cheating, many point out that Nadal has been completely silent during some matches, implying it may be used as a distraction technique. Whether Nadal is a faker, we’re not sure, but his sounds definitely closely resemble many men’s low grunting release of breath in the bedroom.

Victoria Azarenka is just 25, but is the first Belarusian player to win a Grand Slam singles title and former #1 worldwide, plus she holds several mixed Olympic and Grand Slam titles. She also measures in just under Maria Sharapova at a 95 decibels when playing. It also somewhat bizarrely sounds like a bird warbling, really quite unlike anything we have ever heard before. But then again, who expects average from a champion?

The Williams sisters have certainly done a lot for the game. Serena is currently ranked #1, and holds the current record for the oldest WTA player (at the age of 33) while her sister Venus was the first black woman to hold the title, and one of only 4 women to ever win 5+ Wimbledon titles. Now, just because they’re equally talented at tennis means they are exactly alike: Serena has been recorded at 88.9 decibels (equivalent to a power lawnmower) and Venus at 85 decibels (similar to a food blender) respectively. Serena’s noises tend to be lower grunts, while Venus’ are a higher pitched and tremulous.

Now, much has been said about trying to limit the sounds of tennis players (particularly female players) during matches because ‘some fans find it bothersome.’ We get it― these loud, guttural, even primal, noises don’t exactly mesh with the usual, country club-like image that tennis has, but really, truly top level displays of athleticism are very rarely quiet and polite. While there are some who say they can stay completely silent during, well, maybe they simply aren’t doing it right.